Super Derby Prelude Day consists of seven stakes races mostly for Louisiana breds, with total purses of $360,000 up for grabs on Saturday afternoon at Louisiana Downs in Bossier City. Conditions were typical for early August, with cloudy skies, fast main track and firm John Franks turf course, and temperatures in the high 80's with minimal wind. This year the $300,000 Super Derby (G3) is scheduled for September 7 over 1 1/16 miles on the main track (it had been run at 1 1/8 miles on the turf for one running).


The highlight race of the night was the $60,000 Super Derby Prelude Stakes, for three-year-olds going 1 1/16 miles on the main track. Jockey Carlos Lozada sent 17-1 Fredonian to lead through fractions of 25.23 and 49.96 while pressed by 3-1 third choice Trevilion and stalked by 38-1 longest shot Paynt Battle. On the far turn Fredonian tired allowing Trevilion to inherit the lead through 3/4 in 1:14.03, but 8-1 Leader of Men, 5th early under Hector Del-Cid, came out for room to collar Trevilion in midstretch through 1 mile in 1:39.12, and pulled away late to win by 1 length in 1:45.96. It was another length back to Paynt Battle third. 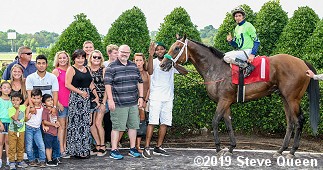 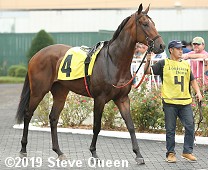 Left: Leader of Men in the winner's circle. Winning trainer Jodie Hodges said, "He's finally starting to grown up. He's a May 28th baby; he's just a kid. I cannot thank Kevin Wampole for his support and buying great racehorses." Winning owner Kevin Wampole said, "I've watched his races, and knew he could run. But he didn't know how to run. So I asked my wife if I could buy him and she said okay! He's only going to get better. This was my first stakes race; I've been buying quality horses for six years; that's what will get you here."

Right: Second place finisher Trevillion in the paddock before the race.

Kicking off the 7-race all-stakes card on Saturday was the $50,000 Louisiana Cup Juvenile Stakes for Louisiana-bred 2-year-olds sprinting 6 furlongs on the main track. Jockey Richard Eramia sent 1-2 favorite Pickens to the lead exting the chute through fractions of 22.83 and 45.79 while pressed by 19-2 Scotty Boy and stalked by 14-1 Papa's Isaac. Turning for home jockey Alexander Castillo asked Scott Boy for run and he obliged, powering away late to win by 8 1/4 lengths in 1:11.46. It was another 2 lengths back to Papa's Isaac third.

Winning owner-trainer Ronnie Ward said, "We train him here and were looking forward to running him at Louisiana Downs. I told Alexander not to get caught up in the early speed. It was great to win this with and share it with his breeder, Fred Willis." 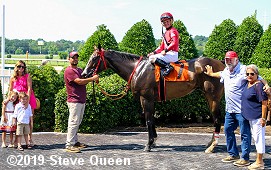 A field of 7 Louisiana-bred older horses went in the $50,000 Louisiana Cup Sprint at 6 furlongs on the main track. 14-1 Wonder Run was quickest out of the chute through an opening quarter of 22.52 before jockey Colby Hernandez sent 10-1 Laughingsaintsong to lead through a half in 44.88. Kept to task by Hernandez, Laughingsaintsong drew off late to win by 5 1/2 lengths over late-running 3-1 State Treasurer in 1:10.07. It was a neck back to 6-1 Double Barrel Man third, and 1 3/4 more to 4-5 favorite and defending champ Monte Man fourth.

Winning trainer Allen Landry said, "He ran a great allowance race at Evangeline last month. We didn't want to change a thing and we had been pointing for this for a while." 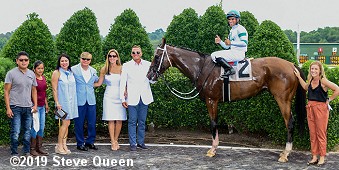 Winning owner Courtney Barousse said, "I want to thank Steve (Asmussen), his assistant Ashley (Trosclair) and Richard. As an owner, I just pay the bills; they do all the work to get these wins." 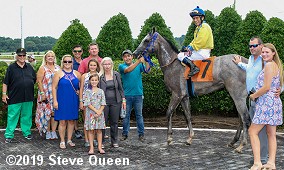 A full field of 12 Louisiana-bred 2-year-old fillies contested the $50,000 Louisiana Cup Juvenile Fillies at 6 furlongs on the main track. 5-2 favorite Sarah's Passion set the pace of 22.99 and 46.44 while pressed by 9-2 Joe G's Payback and stalked by 7-2 First U Make Aroux. Turning for home, jockey Edgar Prado sent First U Make Aroux to the lead through 5/8 in 59.13, drawing off late to win by 2 1/4 lengths over Sarah's Passion. It was a long 4 lengths back to Joe G's Payback third.

Bobby Felks, assistant to winning trainer Ed Johnston said, "We campaigned Pacific Pink (earner of over $730,000) and she was so easy. This mare can be kind of mean and had never run here before. She's better on the turf that main track; ran a very good race today." 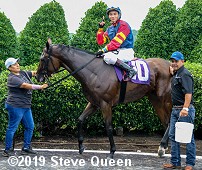 Closing out the card, a field of 8 older Louisiana-bred fillies and mares sprinted 6 furlongs in the $50,000 Louisiana Cup Filly And Mare Sprint. 6-1 Play United was quickest away through an opening quarter of 22.81 before jockey Joel Dominguez sent 10-1 Diamond Cutter to lead through a half in 45.50. Kept to task by Dominguez, Diamond Cutter opened up a 5 length lead through 5f in 57.79, and cruised the rest of the way to win by 3 1/2 lengths over 9-5 favorite Galaxy Thirtysix third.

Winning trainer Dwight Viator said, "She is such a game mare. Joel put a great ride on her."