The $1 million Preakness Stakes (G1) is traditionally the second jewel in the Triple Crown run on the third Saturday in May, but due to COVID-19 postponements, this year it served as the final race of the series, and due to the delayed scheduling, it was added to the Breeders' Cup Challenge Series, the winner earning automatic entry in the Classic on November 7 at Keeneland. A field of 11 three-year-olds contested the 144th renewal of this 1 3/16 mile classic around two turns at historic Pimlico Race Course in Baltimore, with no fans in the usual packed grandstand and infield. Conditions were typical for early October in Maryland, with partly cloudy skies and temperatures in the mid 60's.

As expected Authentic was sent off as the 3-2 favorite, winner of the Haskell (G1) and Kentucky Derby (G1). In to challenge him included 5-2 second choice Art Collector, winner of 5 straight including the Blue Grass (G2) and the Ellis Park Derby, and 7-1 third choice Thousand Words, winner of the Shared Belief after finishing 2nd in the Los Alamitos Derby (G3).
Jockey Florent Geroux sent Thousand Words to the lead first time by through an opening quarter of 24.48 before Authentic took over down the back, parked 3 wide through a half in 47.65, pressed by Thousand Words and stalked by 11-1 Pneumatic and Art Collector. On the far turn, jockey Robby Albarado, 5th early aboard Swiss Skydiver, sent the filly to challenge the favorite down on the rail through 1 mile in 1:34.74. The pair battled the length of the stretch, but Swiss Skydiver never gave up the lead, holding off Authentic to win by a head in 1:53.28, just 28/100 off the stakes record set by Secretariat in 1973. It was a long 9 3/4 lengths back to late-closing 41-1 longest shot Jesus' Team third. 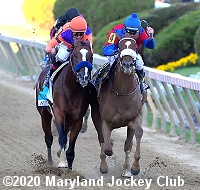 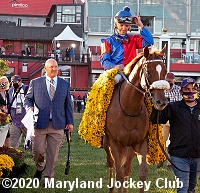 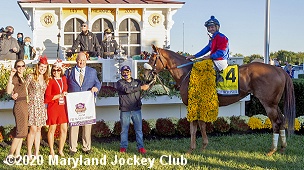 Left: Trainer Ken McPeek follows Swiss Skydiver and Robby Albarado to the winner's circle. She is the first filly to win the Preakness since Rachel Alexandra in 2009. McPeek said, "The job Robby did today was incredible. I was worried when they got to the sixteenth pole and Authentic looked like he got his head in front. I'm just thrilled she fought on like she did. There are no guarantees in this game." 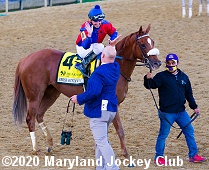 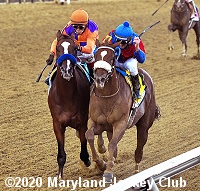 Left: Trainer Ken McPeek gives Robby Albarado a high five after winning the Preakness with Swiss Skydiver. Albarado said, "I had to make a conscious decision in the middle of the backstretch. I jumped in there. My plan was to stay on the inside. It was the Derby champ. You have to give him respect. I maybe hit her once. It was a sprint home, and she was determined to be in front of him and wasn't letting him pass. She has a heart of gold. A true champion, yes."

Left: An inside view of the finish. 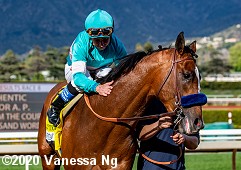 Second place finisher and beaten favorite Authentic earlier in the year. Trainer Bob Baffert said, "I thought I was going to be on the lead," he said. "(John Velazquez) said that it didn't work out and he was rating (Authentic) today (behind Thousand Words). He doesn't like rating. That's a good filly. He had every chance to get by her. He got beat. He just couldn't get by her. She dug in. She's tough." 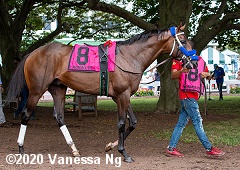