After his narrow loss to Giacomo in the Kentucky Derby where he was third by a length, Afleet Alex was sent off the favorite in the Preakness based on his excellent past performances and his strong morning gallops. He did not disappoint his backers, although they probably had a near heart attack when he almost fell at the head of the stretch after Scrappy T veered out and clipped his heels. He comes from a family that has been successful in the Preakness in the past, with two previous winners coming from his great-grandsire Mr. Prospector's line (Tank's Prospect in 1985 and War Emblem in 2002). He is the first Preakness winner for his jockey Jeremy Rose, who got his start in Maryland back as an apprentice. He was the first Preakness starter for his owners, Cash Is King Stable, and the first Preakness winner for his trainer, Tim Ritchey.

Unlike most recent Classic winners, he was a well-raced and successful 2-year-old, with wins at Saratoga in the Sanford and Hopeful along with seconds in the Champagne and Breeders' Cup Juvenile. He took the same Arkansas path to the Triple Crown as last year's Preakness winner Smarty Jones, winning the Mountain Valley and Arkansas Derby before finishing third in the Kentucky Derby. The only time he has ever finished worse than third was in the Rebel Stakes at Oaklawn where he was 6th, but later found to be sick. Apparently he recovered nicely.

Afleet Alex is was bred in Florida by John Martin Silvertand and was sold as a 2-year-old in training at the Timonium Fastig-Tipton sale for only $75,000. He is owned by Cash Is King Stable, an ownership syndicate of five people, mostly from Pennsylvania, with Chuck Zacney as the managing partner. The other partners are Robert Brittingham, Joseph Lerro, Joseph Judge, and Jan Reeves. Afleet Alex was their first runner and was recommended to the group by trainer Tim Ritchey. Afleet Alex is named after Zacney's son and Brittingham's daughter who are both named Alex. Because of the name, they have become affliated with the charity Alex's Lemonade Stand for Pediatric Cancer Research and are donating a portion of his earnings to it.

Managing partner Chuck Zacney said after the Preakness, "I mean, what a ride. Less than a year to the Breeder's Cup. Churchill Downs, now the Preakness. Unbelievable. You know, what a dream come true. And that's the one thing we realize how lucky we were and we're very, very thankful, and I got to tell you one thing. We've got to thank all those little angels, boys and girls out there. We have been getting so many cards, emails, we have so much support, thank you very much." 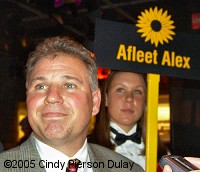 Trainer Tim Ritchey has been around horses all his life and started riding at age 2 1/2. At 18, he attended the Potomac Horse Center and spent 1 1/2 years on the US Olympic Equestrian Team. He went on to ride steeplechase races before turning to training thoroughbreds. He has trained in Delaware, Arkansas, Maryland, and Pennsylvania, with his main base at Delaware Park. He is a five-time leading trainer at Delaware and has been in the top four in the track's trainer standing for 13 straight years. His first Triple Crown appearance was with Marciano in the 2001 Preakness, who finished 7th. He also trained Docent to win back-to-back Maryland Million Classics in 2002 and 2003.

After the Preakness Ritchey said, "I've been a trainer over 30 years, so you put your time in at the small tracks, you finally get an opportunity to find a horse of this ability, believe me, it's the horse. Horses make trainers, trainers don't make horses. I don't care who tells you what. He's the star. And I was just fortunate enough to come across this horse and, you know, it's a little sweeter, probably the fact that it took me 30 years to get here, and I've done it through a lot of cheap races, cheaper horses, a lot of hard times." 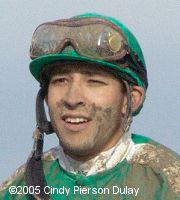 Jockey Jeremy Rose won his first race on September 23, 2000 and went on to win the 2001 Eclipse Award as North America's top apprentice rider. He was the leading rider at Delaware Park in 2001 and was second in 2002 and rides primarily in the Mid-Atlantic tracks. He had back-to-back wins in the Maryland Million Classic with Somerset in 2001 and Docent in 2002. Afleet Alex is his first major stakes winner of what looks to be a very promising career.

Rose describing the race, "Around the first turn I tried to get down, on the backside I was about two or three wide, saw a horse trying to make a move to get past on the outside, so I got back in. It was a really well executed trip by Alex for the most part. I just kind of followed his lead. It wasn't so much my athleticism, as it was Alex. He could have very easily went down and we could have been run over by the field." He continued, "When I clipped heels, yeah. I mean, I had enough time to think about hitting the ground, and he popped up back in. I held off on what I had. He came up back underneath me."