Preakness Day is one of the biggest days of racing in Maryland, with six stakes races on the undercard. The most important stakes event on Saturday other than the Preakness is the $200,000 Dixie Handicap at 1 1/8 miles on the turf. A compact field of just five older horses (scratched down from the six originally drawn) went to post, with Artie Schiller sent off as the prohibitive 3-5 favorite.

John Velazquez sent the 14-1 longest shot Grato Recuerdo to the front on the rail as Edgar Prado immediately joined him aboard the favorite. The two battled it out through very slow early fractions. Grato Recuerdo got the quarter in 26.33, the half in 51.99, and 3/4 in 1:16.82. Turning for home, Cornelio Velasquez aboard 11-1 shot Cool Conductor, who had stalked the pace in third the whole way, came out three wide around the pacesetters, made a bid for the lead and got a head in front a furlong out, and, in a see-saw battle through the lane, prevailed by a nose in a photo finish over Artie Schiller in a final time of 1:52.79. It was 2 1/4 lengths back to Good Reward in third. 3-1 second choice Better Talk Now disappointed in fourth. 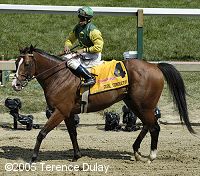 Cool Conductor returns after the race. Winning trainer Ralph Nicks, winning his first graded stakes, said, "This race was in the eye after he won that race on Derby Day, to use this as a measuring stick and see where we were against the better horses in the country going a mile and an eighth. When you can run with Artie Schiller and Better Talk Now, you have no reason to be ducking and diving so much. Cornelio did a fabulous job with him and maybe the horse is starting to mature a little mentally and be more professional in his races" 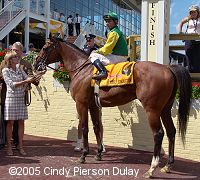 Cool Conductor in the winner's circle. Winning jockey Cornelio Velasquez said, "My horse is a nice horse. He ran hard. The other horse tried to come back, but my horse was not going to lose today. I had a lot of horse." 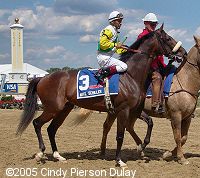 Second place finisher and beaten favorite Artie Schiller in the post parade. His trainer Jim Jerkens said, "I thought it was a weird race for having no pace. You can second-guess but maybe he (jockey Prado) should have let him go down the backside and maybe he would have had an easy lead and been in better shape. That horse was on him so quick. He caught him by surprise and got him shoved down on the inside and tightened it up. No horse likes that kind of spot, and that's what got him beat." 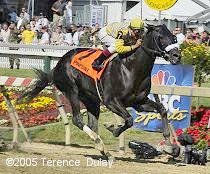 The $100,000 Sir Barton Stakes for 3-year-olds at 1 1/16 miles usually includes horses that were Triple Crown nominated but did not enter the Derby or Preakness. 2002 winner Sarava used the Sir Barton as a prep for the Belmont where he upset Derby and Preakness winner War Emblem. In this year's edition, 4-1 third choice Pinpoint took the lead straight out of the gate, setting an honest pace of 24.65, 49.13, and 1:13.04 while a length clear of 5-2 second choice Smokescreen. Through the stretch, Jerry Bailey asked Smokescreen for run but in late stretch, Pinpoint dug in and held him off to win by 3/4 length in 1:44.43 over the fast main track in gate-to-wire fashion. It was 5 lengths back to 7-1 shot Killenaule in third, while 2-1 favorite Reel Legend was fourth.
Full results chart from DRF

Winning trainer Nick Zito said, "The farther he runs, the better he looks. He has talent and it looks like he is learning how to compete." Zito said Pinpoint will go next in the Belmont Stakes. Winning rider Rafael Bejarano said, "He broke fast. I was comfortable in the front, and he was going strong at the end. I didn't have to urge him much. He can run all day." 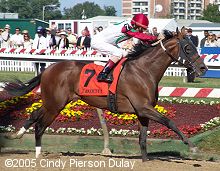 The Grade 3 William Donald Schaefer Handicap featured older horses going 1 1/8 miles on the main track for a $100,000 purse. 5-2 second choice Zakocity assumed the early lead and set a brisk pace of 24.07 and 47.34 saving ground on the rail while dueling with 11-1 longshot Clays Awesome, and then drew off in the final furlong to win by 2 1/2 lengths in 1:49.09. 2-1 favorite Alumni Hall was wide throughout and inexplicably failed to fire, finishing last in the field of eight.
Full results chart from DRF

Winning trainer Patrick Reynolds said, "I told Jerry to go to the lead. He rode a great race. It means a lot when Jerry rides for a guy like me. I don't have a lot of stakes horses." Winning jockey Jerry Bailey said, "He's a speed kind of horse and there wasn't much speed in there other than me. That was Pat's instructions - go to the lead and control it the best I could." 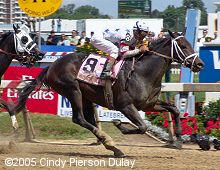 The Grade 3 $100,000 Maryland Breeders Cup saw a field of eight older horses sprint 6 furlongs on the main track. 4-1 third choice Willy o'the Valley stalked the fast pace of Take Achance On Me in fifth early, came out five wide at the top of the stretch, bumped with 6-5 favorite Gators N Bears at the eighth pole when the favorite drifted out wide, but surged clear afterwards to win by a length over 9-1 shot With Distinction. Favorite Gators N Bears disappointed in fourth.
Full results chart from DRF

Winning trainer Richard Dutrow Jr. said, "I was going to run him at Monmouth in an overnight stake, but I saw this race wasn't coming up the strongest. I figured we would take a shot and we drew a good post. He was sitting on a good race, obviously. I really don't know his best game yet, but I'm happy about what happened today. We have time to figure him out." Winning rider Edgar Prado said, "I was able to get behind the speed and save some ground. When I swung outside, he really kicked it in. I'm really lucky to get back with him and winning this race." 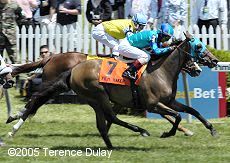 The Gallorette Handicap featured older fillies and mares at 1 1/16 miles on the turf for a $100,000 purse. Nine went to post in the Grade 3 event. 2-1 favorite Film Maker was unhurried early in seventh down the backstretch, then jockey Jerry Bailey took him wide around the far turn, asked for run, and got it, as Film Maker closed strongly through the lane to prevail by a neck over 5-1 shot Briviesca in a time of 1:44.29 over the "good" turf course.
Full results chart from DRF

Winning jockey Jerry Bailey said, "They were starting to quicken from the three-eighths pole home, and I really couldn't keep pace. I couldn't gain any ground, so I tucked her back in again. She didn't have a lot of acceleration on the turn, so I didn't know what to expect in the stretch, but I was pleasantly surprised." Winning trainer H. Graham Motion said, "She's a very special filly. She's so professional. She's the easiest horse to train. She's definitely the best turf filly I've ever trained. Her next start will probably be in New York, wherever Jerry can ride her. Jerry said she didn't handle the turf that well, so she should be able to handle Belmont turf even better." 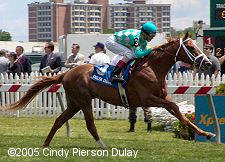 The $100,000 Woodlawn Stakes featured 3-yearolds at 1 1/16 miles on the turf. 1-2 favorite English Channel did as expected under John Velazquez, rallying from seventh early then rallying strongly through the lane to draw away by 4 lengths over 11-1 United in 1:45.55 over the good turf. Ginny DePasquale, assistant to winning trainer Todd Pletcher, said, "It's starting to look like he's a push-button horse. He was very game and he had to be to fight off all challenges. He broke a little slow and was laying behind a wall of horses. We were all holding our breath, but John rode like the winner he is." Winning rider John Velazquez said, "I guess the trip was pretty good since we won, but we didn't break well. Luckily I knew the horse and I knew that all I had to do was get good position around the quarter-pole and we would be home easy from there."
Full results chart from DRF