For the first time today, most of the Preakness horses were at Pimlico as many arrived at the track yesterday. Most of them were out this morning to stretch their legs and get a feel for the racing surface. This was also the day for the traditional Alibi Breakfast where the trainers of the horses get to make their excuses for Saturday and have a little fun. For more on the Alibi Breakfast, check here. 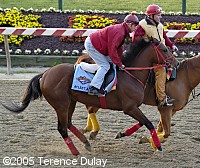 Afleet Alex went out around 6am with a pony to jog a mile and a half and gallop a mile and a half. Trainer Tim Ritchey said, "That way he's not going to go faster than we wanted him to. It's like a little bit of a taper down in order to get a bigger performance on Saturday." At the Alibi Breakfast he said, "He came out of the Derby very well, and he's been here (at Pimlico) longer than any other horse (in the field) so he's accustomed to these new surroundings and the surface. Hopefully we get a better trip in the Preakness, a more successful trip. He'll try to get the job done. The distance (1 3/16 miles) is just fine, he'll run a great race." 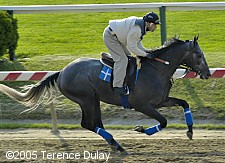 Kentucky Derby winner Giacomo was out just before the renovation break at 8am for an easy gallop. "He was comfortable on the racetrack. He wasn't looking at all the tents in the infield. When he jogged on the backside and got into his gallop, he got into a nice easy, long gallop, a nice stride. He wasn't going short. He looked like his normal self, pretty comfortable out there," said trainer John Shirreffs.

Shirreff's hopes for Giacomo to repeat in Saturday's Preakness Stakes were further boosted by exercise rider Frankie Herrarte's evaluation of the Derby winner's mile and a half gallop. "Frankie said he likes the surface a lot. That was one of the comments he made when he first went to Churchill Downs – that he liked the track. I think that's very encouraging," Shirreffs said. 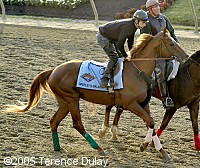 Greeley's Galaxy went to the track at Pimlico shortly after 7 a.m. Thursday morning. He visited the gate and galloped once around the one-mile oval. Greeley's Galaxy finished 11th in the Kentucky Derby. 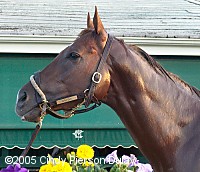 High Fly was the first of trainer Nick Zito's three hopefuls to go out to the track this morning. In succession, Live Oak Plantation's High Fly, Tracy Farmer's Sun King and My Meadowview Farm's Noble Causeway all galloped a little bit more than a mile and a quarter.

"They all had a good day," said Zito, whose horses arrived from Churchill Downs late Wednesday afternoon. "They all looked comfortable, happy. They did everything right. They did a good job. It looked like they all shipped well." 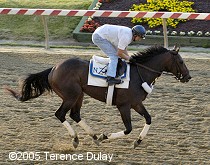 Sun King was the next to take to the track. Although his three Preakness starters finished off the board in the Kentucky Derby, as did stablemates Bellamy Road and Andromeda's Hero, Zito said he didn't view the Preakness as a way of seeking redemption.

"Redemption's a very strong word. We'd like to turn it around, that's obvious. I'd like these horses to run much, much better. That would be a plus for me," Zito said. 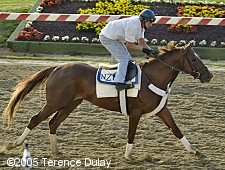 Noble Causeway was the last of the three Zito charges to get his gallop in. 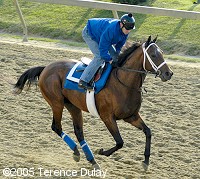 Kentucky Derby runner-up Closing Argument was out for a gallop around the Pimlico oval Thursday morning under the watchful eye of trainer Kiaran McLaughlin. "He ran a winning race in the Derby," McLaughlin said. "If he runs that same race back, it's good enough to win the Preakness." 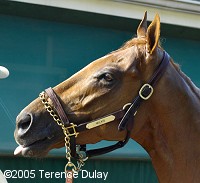 Wilko got his first look at the Pimlico course Thursday morning, taking in the sights while leisurely jogging a mile and a half. Wilko arrived from Kentucky Wednesday afternoon. On Tuesday, he breezed a half-mile in :50.60 at Churchill Downs. "This is the first time he's been out since the work Tuesday," said trainer Craig Dollase. "He looks like he's coming into this race really well." 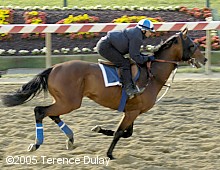 Hight Limit galloped a mile and a quarter under assistant trainer Jose Cuevas Thursday morning after arriving from Churchill Downs on Wednesday. He was wearing blinkers and will race with blinkers for the first time in the Preakness. 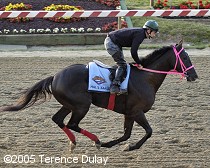 Hal's Image galloped a mile and a half around the Pimlico oval Thursday morning, his first outing since arriving by van from Florida in the wee hours of Wednesday morning.

"We let him jog around first," said trainer Barry Rose. "He got to do a little sightseeing, and then he stopped to pose for pictures. He's doing fine." 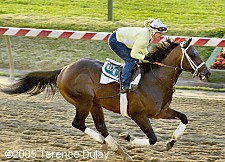 Hall of Fame trainer D. Wayne Lukas sent Going Wild out to the track Thursday morning for a mile and five-eighths gallop.

Lukas was not happy that Going Wild, a speedy son of Golden Missile, landed in the outside post. "It killed us when they drew us the 14-hole Wednesday night," Lukas said. "That's probably the worst thing that has happened to me all week. I like my horse and everything, but I don't like that situation. It took all my options away of what I'd like to do with this horse. That was not a good deal. I think I've got very few options."