A record crowd of 115,318 descended on Pimlico Race Course in Baltimore under mostly sunny skies for the 130th running of the Grade 1 Preakness Stakes, the second leg of racing's Triple Crown. A maximum sized field of 14 went to the gate in the $1 million classic at 1 3/16 miles, with Kentucky Derby third place finisher and beaten favorite Afleet Alex sent off as the 7-2 favorite over 5-1 second choice High Fly. Kentucky Derby winner Giacomo was the 6-1 third choice in the win pool.

As expected, 18-1 longshot High Limit was gunned right to the front by Edgar Prado, and he battled with 27-1 shot Going Wild and 13-1 shot Scrappy T through a quarter in 23.17, a half in 46.07, and three quarters in 1:10.72. Going Wild succumbed to the furious pace and dropped out of contention on the far turn, eventually finishing last. Turning for home, favorite Afleet Alex, who dropped back to 10th down the backstretch and saved ground around both turns, angled out for clear run at the leaders. With 3/16 of a mile to go, jockey Ramon Dominguez whipped Scrappy T who ducked outward into Afleet Alex, and the pair clipped heels in the process. Afleet Alex stumbled badly but miraculously recovered and then under mild urging by Jeremy Rose, surged ahead at the 1/8 pole and drew away to win by 4 1/2 lengths over Scrappy T in a time of 1:55.04 over the officially "fast" main track. It was another 5 lengths back to the late running Giacomo in third, who was just a length back to 21-1 closer Sun King in fourth. 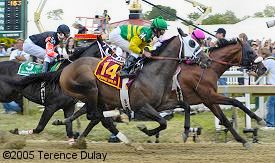 First time by with High Limit in front followed by Going Wild and eventual 3rd place finisher Scrappy T. Bobby Frankel, trainer of High Limit who finished 5th, said, "He ran good, didn't he? Where did he finish? I think he was fifth. If Lukas' horse wasn't with him he would have won, and where did his horse finish?" Going Wild finished last. 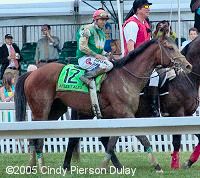 Afleet Alex heads toward the winner's circle after the Preakness. Winning jockey Jeremy Rose said, "Around the first turn I tried to get down, on the backside I was about two or three wide, saw a horse trying to make a move to get past on the outside, so I got back in. It was a really well executed trip by Alex for the most part. I just kind of followed his lead. It wasn't so much my athleticism, as it was Alex. He could have very easily went down and he we could have been run over by the field. He's an amazing horse. No horse I've ever seen in any race stumbled like that. And I don't know any horse stayed up after going that close to the ground. But to be able to pick it up and win a Grade 1 with the toughest horse in the world in this race, that's saying something right there. We clipped probably his right heal with our left front. That's one of the worst things that can happen in racing, clipping heels. Trust me, (Ramon Dominguez aboard Scrappy T) didn't do it on purpose. I saw him hit his horse left handed, looked like it might have been the first time the horse might have been hit left-handed. He just jumped out from under him. You can't stop that." 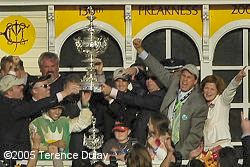 The happy connections in the winner's circle. Chuck Zacney, representing winning ownership group Cash Is King Stable, said, "I'll tell you what, nerves, nerves, nerves. I see him clear and soon as he took the rail, I knew he was going to fire. I seen the other horse move out. I went oh, my God. Oh, no. Then he recovered. Jeremy, unbelievable, I love you buddy boy. Tim (Ritchey) and I were actually next to each other, we're talking and we're cheering the horse on. Alex made the big move. Top of the stretch, the five horse started to drift over, Tim and I are saying oh, no, no. Jeremy held the horse together. Alex, once again, just kept it and we won. What can we say? Less than a year to the Breeder's Cup. Churchill Downs, now the Preakness. Unbelievable. You know, what a dream come true. And that's the one thing we realize how lucky we were and we're very, very thankful, and I got to tell you one thing. We've got to thank all those little angels, boys and girls out there. We have been getting so many cards, emails, we have so much support, thank you very much." 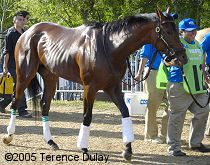 Afleet Alex heading over from the backside for the Preakness. Winning trainer Tim Ritchey said, "He did something champions do today. Absolutely tremendous in Maryland's biggest race. I lived in Maryland since 1992. It's tremendous to win the biggest race in the state you reside in. I've been a trainer over 30 years, so you put your time in at the small tracks, you finally get an opportunity to find a horse of this ability, believe me, it's the horse. Horses make trainers, trainers don't make horses. I don't care who tells you what. He's the star. And I was just fortunate enough to come across this horse and, you know, it's a little sweeter, probably the fact that it took me 30 years to get here, and I've done it through a lot of cheap races, cheaper horses, a lot of hard times." 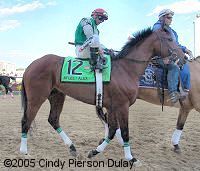 Afleet Alex in the post parade. Asked about Afleet Alex's next race, Ritchey added, "I think he'll go a mile and a half without a problem. I always have. Ever since I had him as a two-year-old in the Breeder's Cup (Juvenile). So as long as he comes out of the race, we've got three weeks to prepare him for the Belmont. My plans at this point are to go forward to the Belmont:" 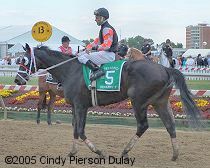 Second place finisher Scrappy T returns after the race. His trainer Robbie Bailes said, "He got looking around at the top of the stretch and he just bolted. We thought we had him straight, but he's never been around this kind of crowd. He really dug back in again. It was a hell of a race. We were real pleased." 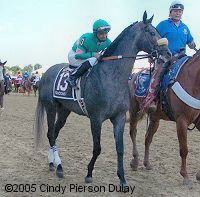 Third place finisher Giacomo in the post parade. His jockey Mike Smith said, "My horse ran dynamite, but I had to idle a very long way and that really hurts you in this type of race. He galloped out great, so I know he'll come back strong in his next race." 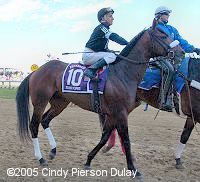