The Plate Trial is one of the last major preps for the Queen's Plate, Canada's equivalent of the Kentucky Derby. Held 3 weeks before the main event, most top contenders enter this $164,300 event at 1 1/8 miles at Woodbine. A field of seven went to the gate on Sunday afternoon, with Get Down bet down to 7-5 favoritism, mostly because of the large "cheering section" from ownership group West Point Thoroughbreds. Also in the field were 5-2 second choice and Queen's Plate winter book favorite Dance With Ravens, and 3-1 third choice Three in the Bag who had shipped in from New York back in May.

At the start, Dance With Ravens was sharpest out of the gate, but just 1/16 of a mile out, the favorite clipped heels with 9-1 shot Atanas as the latter attempted to angle in towards the rail. 7-1 shot Out From Africa seized the lead and set fractions of 24.16, 48.87, and 1:14.53, as favorite Get Down stalked him a length off the slow pace. Turning for home, both pacesetters tired and dropped back, as Dance With Ravens came out three wide to grab the lead inside the quarter pole. Three in the Bag, who had raced in last early, came widest of all around the turn and rallied well through the lane but could not get past Dance With Ravens, who finished a neck in front in a slow time of 1:52.52 for the 1 1/8 miles over the fast track. It was 2 1/4 lengths back to Get Down in third.

In the end, the start determined the finish of the race as Dance With Ravens was disqualified from first to sixth behind Atanas and Three in the Bag was awared the win. This was the first Plate Trial winner to be disqualified in 107 running of the race, but the DQ is unlikely to effect Dance With Raven's favoritism for the Queen's Plate on June 26. 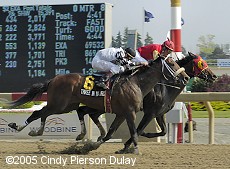 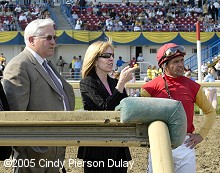 Dance With Raven's connections, trainer Mark Frostad, owner Tammy Samuel-Balaz, and jockey Todd Kabel, watch the replay during the inquiry. Richard Grubb, Ontario Racing Commission Steward, said "About 20 yards out of the gate, Todd Kabel's horse (Dance with Ravens) drifted out on Atanas. Rui Pimentel's horse (Atanas) caught his heels and nearly went down. We had to disqualify him. He came right in front of his path. When the horse hits heels then you're in jeopardy of going down. That's more severe."

Trainer Mark Frostad has filed a formal appeal and said "It's pathetic. (The stewards), they can't tell. What a joke." Jockey Todd Kabel said, "That's the lowest call in racing. I mean, Rui runs up on my horse's heels and he checks and then claims foul? It's a crock of crap." 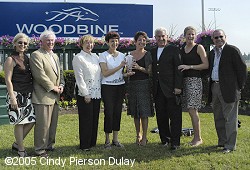 The happy owners of Three in the Bag accept the Plate Trial trophy. "We were real happy with the way he (Three in the Bag) ran," said veteran New York conditioner Stanley Hough. "He settled. We wanted to take him back today and try that. We were hoping for a lively pace and that didn't come about. We were a little questionable about his distance and we think the way he ran today gives us some encouragement. We're tickled to death with the way he ran but we would like to have won it the other way (no disqualification). He'll stay here (at Woodbine). He doesn't need a lot (of work). He'll probably work once in between (now and the Plate); maybe a strong gallop or two." 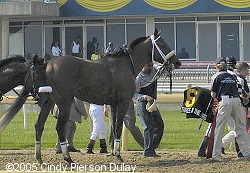 Winner by DQ Three in the Bag unsaddling after the race. He was already back at the barn when the results were official so didn't get to go to the winner's circle. He was a $15,000 supplemental nomination to the Plate on May 15, had come into the Plate Trial with just a maiden win in six starts and was making his stakes debut. However, in his last outing at Belmont Park, May 8, he finished a good second to Reverberate, who in turn then finished second to the well-regarded Oratory in the Peter Pan Stakes last month and is expected to run in the Belmont Stakes next weekend. 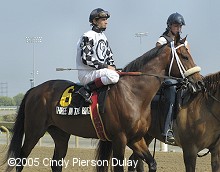 Eventual winner Three in the Bag in the post parade with Dave Landy up. Landry said, "(The plan was) sit off the pace and see if we can relax him early and make one run. We got to go 1 1/4 mile. He did everything perfect. He’s just really class horse and when you’re on those types of horses it makes your job easy. He was actually surprisingly nice. I did get to see him run a couple of times at Gulfstream and he was a little aggressive. Maybe the new surroundings helped me get him off the pace a little bit. I was really happy with him." 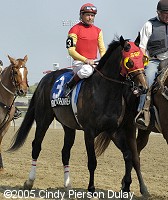 Disqualified winner Dance With Ravens in the post parade with Todd Kabel up. Even with the disqualification he will still probably be the favorite for the Queen's Plate. 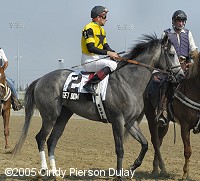 Get Down in the post parade with Slade Callaghan up who was placed second after the disqualification. Callaghan said, "My horse just sort of scrambled a little bit. I don’t think he liked the track much today. I don’t want to make excuses but that’s how it felt to me. He was down on the inside, it was sort of a last ditch effort to try and see if he would prefer the outside and maybe run a little bit, but it really didn’t make any difference. He relaxed really well today and that’s key."