The Grade 1 Pimlico Special has historically featured some of the best handicap horses on the continent, starting with War Admiral winning in 1937 and Seabiscuit in 1938. This year, a field of seven (scratched down from nine originally drawn) went to post in this 1 3/16-mile trip around the Pimlico main track, for a purse of $500,000. Heavy rains earlier in the day and steady showers afterward made for a very sloppy surface despite the track being sealed the night before.

Offlee Wild was sent off as the 5-2 favorite, coming off a runaway win in the Excelsior Breeders' Cup Handicap at Aqueduct last time out. Also in the field was the near 3-1 second choice Eddington, winner of the Donn and second in the Oaklawn Handicap last time out, and 4-1 third choice Funny Cide, unraced since disappointing in the Breeders' Cup Classic but returning for the first time to the track where he won the Preakness two years ago.

When the field got underway, 9-2 fourth choice and local hope Presidentialaffair jumped ahead as jockey Stewart Elliott kept him loose on the lead through fractions of 23.25, 46.58, and 1:11.83, remaining 2 lengths clear of 14-1 shot Eurosilver tracking in behind. Going around the far turn, Eibar Coa asked Eddington for run and got it, as the second choice, who raced back of the pack earlier, came out wide around the turn avoiding traffic and the deep rail to grab the lead after a mile in 1:38.30. He then drew away through the lane to win by 5 1/4 lengths over late-running Pollard's Vision. The time for the 1 3/16 miles was a very slow 1:58.05 due to the muddy conditions. It was another 1 3/4 lengths back to pacesetter Presidentialaffair in third, and another 1/2 back to Funny Cide in fourth. Favored Offlee Wild was wide throughout, tried to rally around the turn but flattened out through the lane and finished sixth.

Also check out the results for the Black-Eyes Susan Stakes and the two other stakes on the undercard. 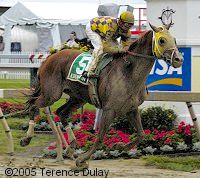 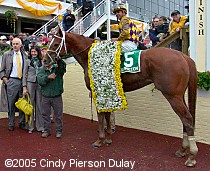 Eddington in the winner's circle with his flowers. Winning trainer Mark Hennig said, "We had to worry about him last year because we couldn't get him to switch leads. We had to give Eibar some instructions and I'm sure that they frustrated him, but he stuck with us and he's a perfect fit for this horse. This is a very prestigious race to win." Winning rider Eibar Coa said, "This is a very tough horse to ride. He's a horse that's mentally young. Last time I got him upset by taking him back. He just wants to be happy. He handled the dirt well doing his own thing. In the stretch he just had another gear. Everybody saw how he finished." 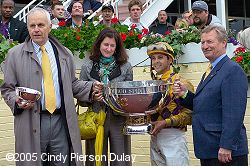 The happy connections with the Pimlico Special trophy. Winning owner Peter Willmott said, "We all felt some frustration with this horse because he wouldn't show his true potential and it wasn't as much fun being frustrated all the time. Of course,. I'm not frustrated tonight and it's a lot of fun." 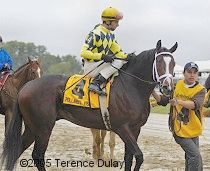 Second place finisher Pollard's Vision in the post parade. His trainer Todd Pletcher said, "My horse ran a huge race. He really stuck down in there and I'm really proud of his effort. He never stopped trying." His jockey John Velazquez said, "He's not his best in the slop, but he kept trying and I'm very proud of him. He ran much better once I moved him to the outside." 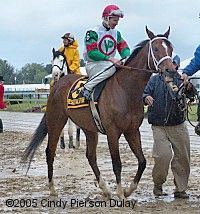 Third place finisher Presidentialaffair in the post parade. His trainer Martin Ciresa said, "The track was kind of dead and he lost a shoe. That certainly didn't help. But he ran great. We were actually hoping it would be dry. He's a mud lover, but it was a little messy out there and that kind of did us in." His jockey Stewart Elliott said, "I think he hung in great considering how the track was playing, he tried the whole way. I thought I had a little more horse, but the track was against us a bit. He ran really good." 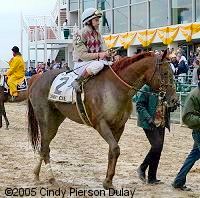 Fourth place finisher Funny Cide returns after the race. His trainer Barclay Tagg said "You always hate to lose, but I didn't think he liked the track. I don't care what anybody says, he doesn't like mud. He doesn't like mud in the morning, and he doesn't like mud in the afternoon. He's coming off a long layoff. He's good and fit and I thought he was going to run well but when it rained like that I was concerned about it." Jockey Jose Santos said, "He's got a good bottom, but I don't think he really performed as well in the mud or the slop as it was today. It's hard to come back in a Grade 1 off a seven-month layoff, but I think the program that Barclay has for him is going to be good for him in the fall." 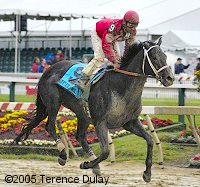