The feature event on Saturday at Belmont Park was the $300,000 Ogden Phipps Stakes (G1) for older fillies and mares going 1 1/16 miles around one turn, seeking automatic entry into the Breeders' Cup Distaff under the Win and You're In program. Conditions were excellent with partly cloudy skies and temperaures in the low 70's. Point of Honor was sent off as the lukewarm 2-1 favorite in the field of 6 off her third place finish in the Apple Blossom (G1). In to challenge her included 9-4 second choice Ollie's Candy, 2nd in the Apple Blossom after finishing 3rd in the Beholder Mile (G1), and 7-2 third choice Golden Award, second in the Royal Delta (G3) after winning the Turnback the Alarm (G3).

Jockey John Velazquez sent 6-1 fourth choice Blamed to the lead exiting the chute through fractions of 22.84, 45.98, and 1:09.86 over the fast track while pressed by Ollie's Candy and stalked by Golden Award. Turning for home, Blamed and Golden Award tired badly allowing Ollie's Candy to inherit a 2 1/2 length lead midstretch through 1 mile in 1:33.89. 15-1 longest shot She's a Julie, 4th early under Ricardo Santana Jr., saved ground on the turn then came out 3 wide into the stretch, outfinishing favorite Point of Honor to prevail by a nose in 1:40.27. It was another neck back to Ollie's Candy third. 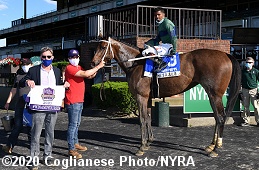 She's a Julie in the winner's circle. Toby Sheets, assistant to winning trainer Steve Asmussen said, "I had to watch it one more time to be sure [she had won.] It was very close. I said to Ricardo before the race that there was a lot of pace in there, and that's how the race unfolded. It was a very patient ride and the pace upfront helped. She ran super."

Winning jockey Ricardo Santana Jr. said, "Everybody put a lot of effort into this filly. Steve said he wanted me to go to New York. She's doing good. I worked her and we were really happy with her. Steve knows what he's doing and I always listen to him. Today, she was feeling good. We got a great break. I sat in the spot I wanted. I knew she was going to give it to me, and she kicked it in. She gave me a nice kick. To be honest, she's training unbelievable. When I came from Oaklawn, Steve made me go to Keeneland to work her. When I worked her, I said, 'she's training unbelievable.' She ran her race today." 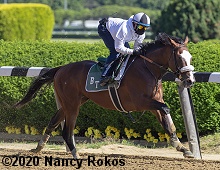 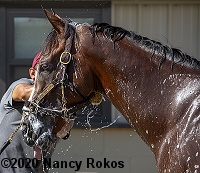 Tiz the Law breezed five furlongs in 1:00.53 seconds Monday June 9 under jockey Manny Franco. He galloped out 6f in 1:12.86 and 7f in 1:25.28. Trainer Barclay Tagg said, "I wanted to wait until the track was perfect after the break and he did everything we asked him to," said Tagg. "He was going maybe a little fast and Robin (Smullen, assistant trainer) got on the mic and told Manny to take a little hold of him, which he did. He galloped out strong and looked fast. I was down there with the pony to pick him up and he pulled up fine." 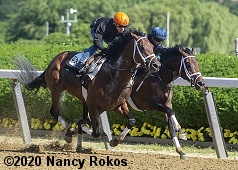 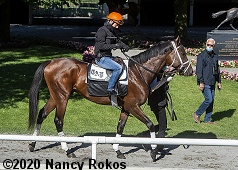 Left: Stablemates Farmington Road (inside) and Dr Post worked a half-mile in company in 48.87 seconds on the Belmont Park main track Saturday June 13. Trainer Todd Pletcher said, "I was very pleased with the work. I was a little concerned going in, working the two horses together but I felt like that was the best matchup for each horse. They worked in company together last week at Palm Beach Downs and it seemed to go well. I thought both horses relaxed nicely in the early part of their work, finished up strongly and galloped out very, very nice. All in all, it went well."

Right: Dr Post in the paddock with trainer Todd Pletcher. Pletcher said, "Dr Post is doing great. The longer we have him, the more he reminds us of his sire Quality Road. He looks a lot like him, he showed some versatility already breaking his maiden at seven furlongs and coming back in a stake in his second start of the year going 1 1/16, encountered a lot of traffic that day and was still able to win. He seems to have moved forward in his training since then." 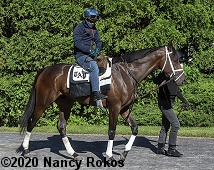 Farmington Road heads out of the paddock Saturday morning June 13. Farmington Road and Dr Post are both sired by Quality Road, who was also trained by Pletcher. Pletcher added, "Solid effort in the Arkansas Derby (for Farmington Road) and I think it was a tough track to make up a lot of ground. He's got a good three-eighths mile run and we have to time it just right. The main thing is getting a track that suits that style and an honest pace. That's what he really needs." 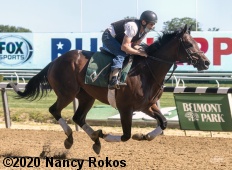 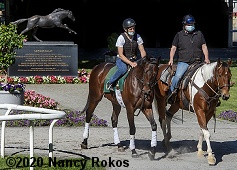 Modernist gallops on Saturday morning June 13. The Bill Mott trainee comes to the Belmont Stakes of a 3rd place finish in the Louisiana Derby.