The feature race at Belmont Park on Saturday was the $300,000 Ogden Phipps Handicap (G1), a 1 1/16 mile trip around one turn of the main track for older fillies and mares before 5,678 under cloudy skies and temperatures in the mid 70's. A field of seven went to post but there were only 5 betting interests, with the 3-horse Godolphin Racing/Darley Stable entry sent off as the 3-10 favorite. In the entry, Seventh Street exits a gate-to-wire victory in the Apple Blossom, Music Note has been unraced since finishing third to Zenyatta in the Breeders' Cup Ladies Classic, and Sea Chanter was third in the Shuvee last out. In to challenge the threesome included 2-1 second choice Seattle Smooth, winner of four straight coming in, including the Bed o'Roses as Aqueduct and the Shuvee at Belmont so far this year, and 15-1 third choice Color Me Up, a close second to Seattle Smooth in the Shuvee last out.

Seventh Street and 27-1 My Dinah battled for the lead exiting the chute through an opening quarter mile in 23.45 over the good main track, with Color Me Up settling in third behind them. My Dinah took over the lead midway down the backstretch and led the field into the turn through a half in 46.36 and 3/4 in 1:09.96. At the top of the stretch, My Dinah tired from the quick early pace, allowing Seventh Street to inherit the lead with 3/16 mile remaining. However, Seattle Smooth, who rated just behind the leaders in 5th down the backstretch, came out four wide and closed well late to wear down Seventh Street in the final 1/16 to win by 1 1/4 lengths in 1:42.13. It was a long 2 1/4 lengths back to Sea Chanter third, and a long 4 1/4 lengths more to pacesetter My Dinah fourth.

Note: Because of the heavily favored entry leaving only 5 betting interests, there was no show wagering. 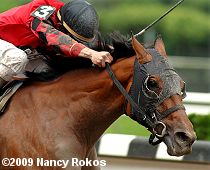 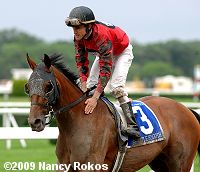 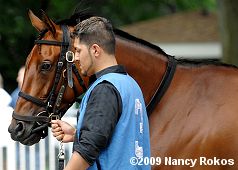 Left: Seattle Smooth returns after the race. Winning trainer Anthony Dutrow said, "The race unfolded very well for us. Immediately, we were in a great situation. Our situation brightened at the 1/4 pole when they all went, and the last 1/16 mile, Seattle Smooth finished up. It set up very well for her. Seventh Street was a very game second, but the race went very well for Seattle Smooth, she was sitting beautifully and I was happy to see it. I do think Seattle Smooth is a very good two-turn filly. She was good today, she had to be, but I like her at two turns. I know she loves Saratoga. We've had her there, trained her there, so I have to be looking forward to the two-turn Saratoga deal."

Right: Seattle Smooth in the paddock before the race. Dutrow said Seattle Smooth would go next in the Go For Wand Handicap at Saratoga. The daughter of Quiet American improved her record to 7 wins, 1 second, and 1 third in 13 starts, earning $971,160 for owner Mercedes Stables LLC. 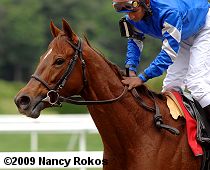 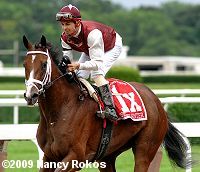 Left: Second place finisher Seventh Street returns after the race. Part of the 3-10 favorite entry, she pressed the pace the whole way under regular rider Rajiv Maragh, took a short lead at the top of the stretch, but yielded to the winner in the final 50 yards. The Saeed bin Suroor trainee improved her record to 4 wins, 2 seconds, and 1 third in 7 starts, earning $476,000 for owner Godolphin Racing LLC.

Right: Third place finisher Sea Chanter returns after the race. Also part of the favored three horse entry, the daughter of War Chant raced back in sixth early under jockey John Velazquez, came out five wide on the turn and finished well to get third beaten 3 1/2 lengths at the line. The Todd Pletcher trainee improved her record to 4 wins, 3 seconds, and 2 thirds in 16 starts, earning $408,501 for owner Darley Stable.