The feature race on Sunday at Monmouth Park was the $150,000 TVG.com Pegasus Stakes for 3-year-olds going 1 1/16 miles on the main track, with the first two finishers earning free entry and starting fees for the Haskell (G1) on July 17. Much like Saturday, conditions were cloudy with temperatures in the low 70's.

A short field of just 5 made final entry, with Risen Star (G2) winner Mandaloun sent off as the 3-10 favorite off his close second place finish in the Kentucky Derby (G1) after disappointing in 6th in the Louisiana Derby (G2). In to challenge him included 9-2 second choice Weyburn, winner of the Gotham (G3) but unraced since 4th in the Wood Memorial (G2), and 5-1 third choice Dr Jack, undefeated in 2 starts in allowance company and making his stakes debut here.

Jockey Angel Cruz sent 44-1 longest shot Lugamo to the lead first time by through fractions of 24.67 and 48.61 while pressed by Weyburn and stalked by Dr jack. On the far turn Lugamo tired allowing Weyburn to inherit the front through 3/4 in 1:12.41. Turning for home, Mandaloun, last early under Florent Geroux, came out 4 wide and swept to the lead through 1 mile in 1:37.96. Weyburn fought back late but Mandaloun held him off to win by a neck in 1:44.63 over the fast main track. It was another 2 1/2 lengths back to Dr Jack third. 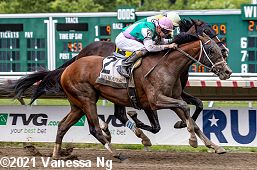 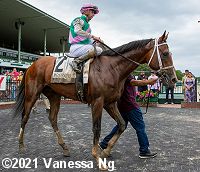 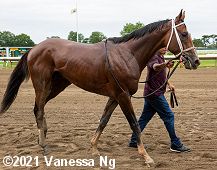 Left: Mandaloun in the winner's circle. Winning trainer Brad Cox said, "We thought he might be on the lead or tracking a couple. We found ourselves last going into the first turn. But overall it was a big effort. I think he closed into a soft pace. He probably had to start his run a touch early given the fact that he was last. He ran a big race. Florent made the comment that he may have been looking around late. But he made the lead by himself. Overall it was a good effort for him to ship over here. I think ultimately we're going to figure out what toll it took on him once we get back home (to Churchill Downs). The ship over for the race, the ship back. Things such as that. We'll put it all together and process it and let him tell us where he is over the next couple of weeks."

Right: Mandaloun heads back to the barn after the race. Winning jockey Florent Geroux said, "(He was pinched) a little bit (at the start). I didn't want to rush him. He was nice and relaxed during the race. It was nice to see that he was able to settle down on his own and everything worked out great. The important thing was not to rush him too hard (after the start)." 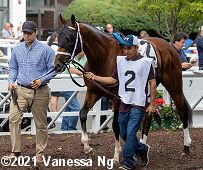 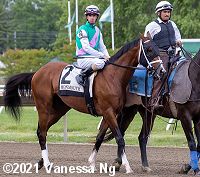 Left: Mandaloun in the paddock. Cox added, "He made the lead and it looked like he was going to go on. Obviously, the horse on the lead was setting softer fractions. You kind of expect that (he was forced to fight late). I don't think that's something that is totally unexpected. Overall it was a big race and we're proud of the effort. He responded when asked and was carried a touch wide and floated through the turn. But overall it was a good effort and hopefully he can bounce out of it in good order and be ready in five weeks (for the Haskell)."

Right: Mandaloun in the post parade. Geroux added, "I had a lot of horse. He was passing horses one by one. At the end, when he made the lead, maybe he was looking around a little. It was a new thing for him not having the whip for encouragement. I saw (Weyburn) coming inside of us. But he was still running pretty good at the end. He had to work for it, but I don't think it was a really hard race on him. He did not come back blowing hard at all." 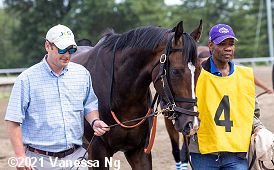 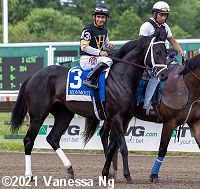 Left: Second place finisher Weyburn walks over before the race. The Jimmy Jerkens trainee improved his record to 2 wins, 2 seconds, and 0 thirds in 6 starts, earning $307,520 for owner-breeder Chiefswood Stable. 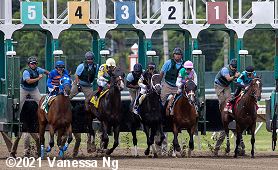 The horses break from the gate for the Pegasus Stakes.