On the Sunday after the Travers Stakes was the $600,000 Personal Ensign Invitational Handicap (G1), a Breeders' Cup Challenge "Win and You're In" for the Distaff (formerly Ladies' Classic). In contrast with Saturday, just 18,706 fans were on hand under sunny skies and temperatures in the low 80's. A field of just 5 older fillies and mares went 1 1/8 miles on the main track, with last year's Breeders' Cup Ladies' Classic (G1) winner Royal Delta sent off as the 2-1 favorite off her 10-length romp in the Delaware Handicap (G1). In to challenge her included 2-1 second choice Authenticity, winner of the Shuvee Handicap (G3) last out, and 7-1 third choice On Fire Baby, second in the La Troienne (G2) after winning the Apple Blossom (G1).

Jockey Joe Johnson sent On Fire Baby to the lead first time past the stands and she set an opening quarter in 23.56 before Mike Smith sent Royal Delta to the front for the backstretch. The favorite set fractions of 46.78 and 1:10.76 while stalked by On Fire Baby and Authenticity. Entering the stretch, Smith asked the champion for run as Royal Delta surged ahead to a 4 1/2 length lead on Authenticity through 1 mile in 1:35.20. Eased up in the final 1/16 mile, Royal Delta cruised past the post 4 1/2 lengths in front in a time of 1:48.34 over the fast track. It was another 1 3/4 lengths from Authenticity to late-running 14-1 Centring third. 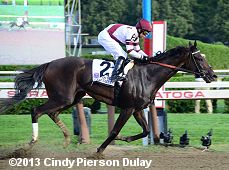 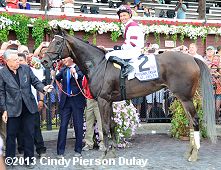 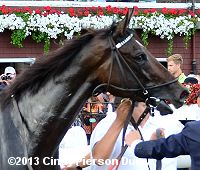 Left: Royal Delta in the winner's circle. Winning trainer Bill Mott said, "When she comes with her 'A' game, that's what you expect. She was just good. She was good last time. Mike said she was strong and felt great. Who's going to go with her? We lapped up on On Fire Baby and (jockey Joe Johnson) backed off us. I guess he could see we were going to go. She's just got a big, beautiful stride and it's hard for some of them to keep up."

Right: Royal Delta heads back to the barn after the race. Mott added, "We'd probably like to go to the Beldame, same as we did last year." 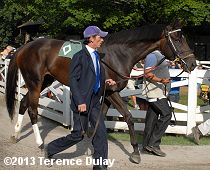 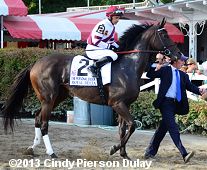 Left: Royal Delta in the paddock. Winning jockey Mike Smith said, "I just was happy I got away good today, and once we did that and she got into her monstrous stride, horses seem to have to take two to her one. She's a machine. Down the lane, she got to looking around the track a little bit, so I got after her just a little to keep her going. She's just so big. You hate for her to gear too much down and someone comes running. It's hard to get going again. Other than that, everything was wonderful."

Right: Royal Delta heads out to the track before the race. Snith added, "Everything went wrong, didn't it, last year. She got really, really hot. I didn't think I rode her really well last year. I was just getting to know her. I didn't let her use that big stride that she has early. I should have then because I think I would have won that one. But you live and learn, and it's just getting better and better." 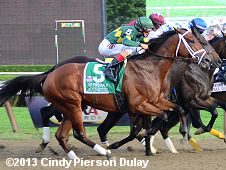 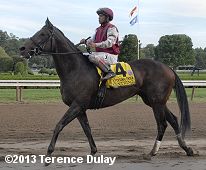 Second place finisher Authenticity shortly after the start. Jockey John Velazquez said, "I got a little bit excited at the 5/16 pole when we were getting closer. I thought we had a chance. Then at the 1/4 pole, Royal Delta reached in and got away again." Trainer Todd Pletcher added, "I thought our filly ran super. We were just second best. I'm really pleased with her effort. She didn't lose any respect in defeat."

Right: Third place finisher Centring returns after the race. Jockey Javier Castellano said, "I had a good trip. My filly really closed today. I really liked the way she did it in the last part of the race. She closed and almost got second place in a Grade 1 behind Royal Delta." 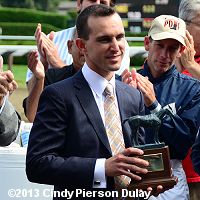 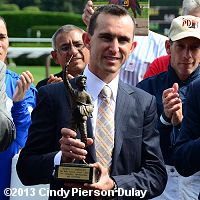 Earlier in the day, retired jockey Ramon Dominguez was presented with both the Mike Venezia Memorial Award (the first recipient since Edgar Prado in 2006) and his third Eclipse Award trophy for outstanding jockey of 2012. Dominguez suffered a traumatic brain injury in a January 18 spill at Aqueduct, which prevented him from attending the Eclipse Award ceremony and also forced his retirement from the saddle. In addition, he was presented with a $15,000 donation to the Permanently Disabled Jockeys' Fund given on his behalf. Dominguez said, "I am humbled to receive this award. What this award represents, I am very proud to be the recipient, for sure." 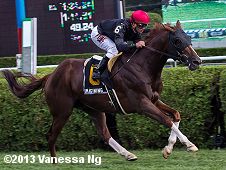 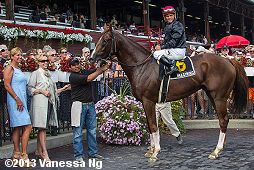 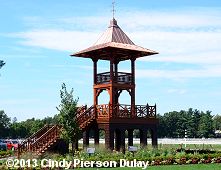 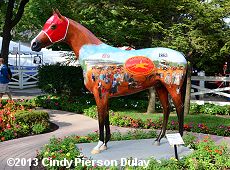 Left: One of the new features at Saratoga is the Whitney Viewing Stand at the Oklahoma training track, which opened to the public on August 3, 150 years to the day of the first race meeting. It is named in honor of one of thoroughbred racing’s most prominent families and dedicated patrons, the Whitneys, and is designed to model the original 1892 Judges' Stand which stood in front of the grandstand. NYRA CEO Chris Kay said, "The ritual of watching the morning workouts is a longstanding tradition at Saratoga, which still rings true each morning on our main track. NYRA is proud to welcome the public back to the historic Oklahoma Training Track for a behind-the-scenes look at the work that goes into training Saratoga’s world-class thoroughbreds. The Whitney Viewing Stand will undoubtedly become a must visit location for both the patrons who visit Saratoga each year and locals alike."