The feature race at Del Mar on Saturday was the $250,000 Pat O'Brien Stakes (G2) for older horses sprinting 7 furlongs on the main track and is a Breeders' Cup Challenge "Win and You're In" qualifier for the Dirt Mile at Keeneland on November 5. Conditions were excellent at the seaside oval with the 12,486 fans in attendance enjoying sunny skies and temperatures in the mid 70's. A field of 10 went to post with Carter Handicap (G1) winner Speaker's Corner sent off as the 11-10 favorite off his third place finish in the Metropolitan Handicap (G1) and second place finish in the John A. Nerud (G2). In to challenge him included 5-1 second choice American Theorem, winner of the Triple Bend (G2) and Bing Crosby (G1), and 11-2 third choice Defunded, seventh in the San Diego Handicap (G2)

Jockey Mike Smith sent favorite Speaker's Corner to the lead exiting the chute through fractions of 22.41 and 44.74 while pressed by Defunded and stalked by 35-1 Principe Carlo. Turning for home Speaker's Corner tired as 7-1 fourth choice Laurel River, 4th early, came through between horses to gain the lead through 3/4 in 1:08.91. Kept to task by Juan Hernandez, Laurel River drew off to win by 3 3/4 lengths over late-running American Theorem in 1:21.37. It was another 3/4 length back to 21-1 Senor Buscador third, and another 1 1/4 lengths to favorite and pacesetter Speaker's Corner fourth. 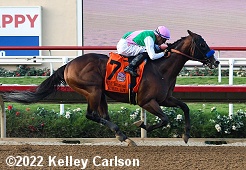 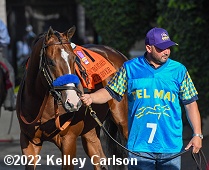 Left: Laurel River in the winner's circle. Winning trainer Bob Baffert said, "I just told Juan (Hernandez) 'Ride him to win' and that's what he did. He just sat there and then he made that split. He has a lot of speed but he's going to be much more effective around two turns."

Right: Laurel River in the paddock. Winning jockey Juan Hernandez said, "This is a nice horse. He broke real sharp, but then he relaxed. I just tried to stay with them early. When we got to the three-eighths I asked him and he responded. It is great when that happen; when you ask and they give it to you. He went between horses without a problem. Bob said 'Ride him to win,' and I did. And he responded. Could he run a mile? He can go the mile. I think so for sure." 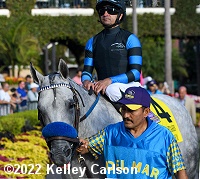 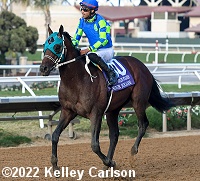 Left: Second place finisher American Theorem in the paddock before the race. The George Papaprodromou trainee improved his record to 4 wins, 4 seconds, and 0 thirds in 13 starts, earning $581,967 for owner Kretz Racing. 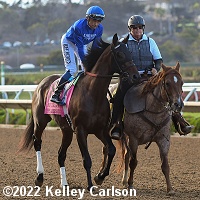 Fourth place finisher and beaten favorite Speaker's Corner in the post parade. Jockey Mike Smith said, "I don't know what was going on with this horse. He was acting up. He got real hot in the warm up. Then he was acting up again in the gate. He just wasn't a happy horse today."