The feature race at Del Mar on Saturday was the $200,000 Pat O'Brien Stakes (G2) for older horses sprinting 7 furlongs on the main track and is a Breeders' Cup Challenge "Win and You're In" qualifier for the Dirt Mile. Conditions were excellent at the seaside oval with the 9,178 fans in attendance enjoying sunny skies and temperatures in the low 70's. After California Street scratched, a field of 9 went to post with Count Fleet Sprint (G3) winner C Z Rocket sent off as the 2-1 favorite off a 2nd place finish in the Steve Sexton Mile (G3) and a close third in the Bing Crosby (G1). In to challenge him included 3-1 second choice Flagstaff, 2nd in the True North (G2) after winning the Churchill Downs (G1), and 5-1 third choice Ginobili off an allowance win on July 17.

During loading, 11-1 Brickyard Ride broke through the gate and ran off, was caught by the outrider, and successfully reloaded into the gate. Jockey Juan Hernandez sent Brickyard Ride to the lead out of the chute through fractions of 22.05 and 44.38 while pressed by Ginobili and stalked by 15-2 Eight Rings. Turning for home, jockey Drayden Van Dyke moved Ginobili out to sweep to the front through 3/4 in 1:09.36, opening up a 3 1/2 length advantage. Favorite C Z Rocket, 8th early under Florent Geroux, put in a strong 4 wide rally but was left with too much ground to recover as Ginobili cruised to a 1 3/4 length win in 1:22.36. It was a head back to Flagstaff third. 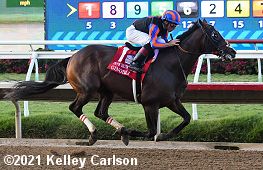 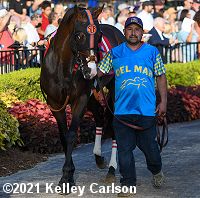 Left: Ginobili in the winner's circle. Winning trainer Richard Baltas said, "We nominated him to the Pacific Classic but we talked it over with the owners and decided to go here. Then he drew the rail, but it really didn't seem to matter. I'm just very, very happy. I thought Drayden rode him great. I told him (Brickyard Ride) is going to go and if you can get off the rail and get outside him, do it. He did all that and (Ginobili) won easy enough I think."

Right: Ginobili in the paddock. Winning jockey Drayden Van Dyke said, "It went right to plan. We said we wanted to break good and get a spot behind (speed horse) Brickyard Ride. It worked perfectly. When I worked him the other morning at San Luis Rey (Downs) (a bullet :46.40) and he went out in 1:11 and change and I couldn't pull him up, I said 'Oh, boy.' I knew what I was sitting on today and it was just a matter of letting him do it. It worked exactly the way it was supposed to." 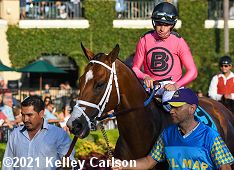 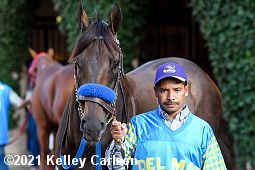 Right: Third place finisher Flagstaff in the paddock before the race. The John Sadler trainee improved his record to 7 wins, 6 seconds, and 4 thirds in 21 starts, earning $1,035,585 for owners Lane's End Racing and Hronis Racing.