The feature race at Del Mar on Saturday was the $200,000 Pat O'Brien Stakes (G2) for older horses sprinting 7 furlongs on the main track and is a Breeders' Cup Challenge "Win and You're In" qualifier for the Dirt Mile. Conditions were excellent with sunny skies and temperatures in the mid 70's. After 1 scratch a field of 7 went to post with C Z Rocket sent off as the 11-10 favorite off 3 straight wins in allowance company. In to challenge him included 2-1 second choice Flagstaff, winner of the San Carlos (G2) but 4th in the Triple Bend (G2) last out, and 13-2 third choice Giant Expectations, unraced since 10th in the Breeders' Cup Dirt Mile (G1) in November.

Jockey Abel Cedillo sent 7-1 fourth choice Law Abidin Citizen to the lead out of the chute through fractions of 23.10 and 46.04 while pressed by Flagstaff and stalked by C Z Rocket. Turning for home, Flagstaff moved up to gain a short lead through 3/4 in 1:10.06, but C Z Rocket, 3rd early under Flavien Prat, came out 3 wide for room and rallied to win by 1/2 a length in 1:22.25. It was another 3/4 length back to pacesetter Law Abidin Citizen third. 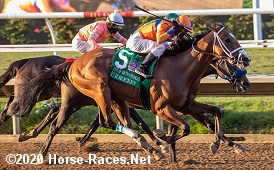 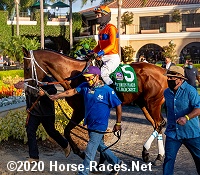 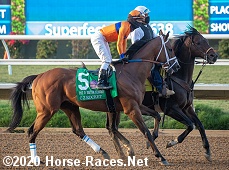 Left: C Z Rocket in the paddock before the race. Winning trainer Peter Miller said, "He broke well and usually he doesn't. The pace was slow and Flavien had him in the perfect spot. Tom Kagele (owner) actually called me (about claiming the horse) and I said, ‘His form is bad right now, but he's a runner.' You could see he had run some really fast races. I like old class horses that have shown talent. If you can get them going in the right direction they can run back to past form. Tom claimed him and the rest is history." 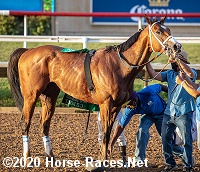 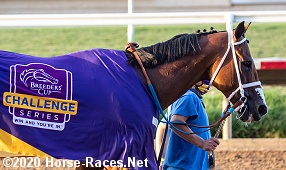 Left: C Z Rocket gets unsaddled after the race. Winning jockey Flavien Prat said, "We saw that he'd been breaking slow in his races, so we were prepared for that. But he broke well today and we were right in the race. Then the pace wasn't that fast, so we were right there. When I asked him, he was good. He's a willing horse. Yes, this is my 12th stakes wins this summer at Del Mar. I've been riding good horses for good connections. That surely makes things easier."

Right: C Z Rocket heads back to the barn after the race. 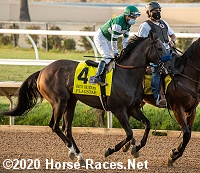 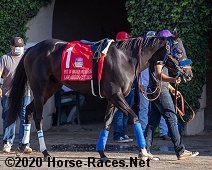