The feature race at Del Mar on Saturday was the $200,000 Pat O'Brien Stakes (G2) for older horses sprinting 7 furlongs on the main track and is a Breeders' Cup Challenge "Win and You're In" qualifier for the Dirt Mile. Originally a field of 5 made final entry but after Cautious Giant and Outside Nashville were scratched, just three faced the starter before the 16,851 fans in attendance enjoying sunny skies and temperatures in the high 60's. Masochistic was the 1-5 favorite off an allowance win in his first start since finishing last of 14 in the Breeders' Cup Sprint(G1). In to challenge him were 5-2 second choice Vyjack, second in the Red Bank (G3) at Monmouth, and 7-1 longest shot Indexical, second in the Bing Crosby (G1). Due to the short field, place and show wagering was cancelled.

Jockey Tyler Baze sent Masochsitic to a clear lead exiting the chute and he set fractions of 22.65 and 45.01 while 2 lengths in front of Indexical in turn 3 lengths ahead of Vyjack. Entering the stretch, Masochistic opened up a 4 length lead through 3/4 in 1:08.22, as Vyjack took over second from Indexical and opened up 2 1/2 lengths on him. Masochistic cruised to a 3 3/4 length win over Vyjack clocked in 1:20.31 over the fast main track, just 31/100 off the track record. It was a long 7 1/2 lengths back to Indexical third. 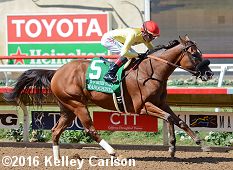 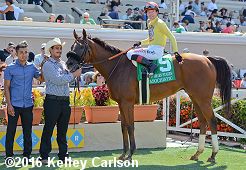 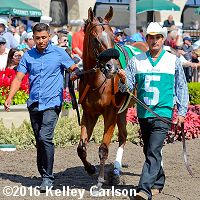 Left: Masochistic in the winner's circle. Winning trainer Ron Ellis said, "I didn't have any anxious moments during the running of the race. Tyler got him to relax beautifully coming out of there and they were just loping along. He disappointed at this track last year at low odds (second, Bing Crosby) but this year he's a different horse. Last year he just wanted to run as fast and as far as he could. This year he's really conserving his energy and I think he can go even farther. Now we've got nine weeks to the Breeders' Cup and we'll train him up for the Sprint (instead of the Dirt Mile)."

Right: Masochistic in the paddock. Winning jockey Tyler Baze said, "The plan? Just to go out there and have a good breeze. He's faster than these horses, so I just wanted to get him out of there and get him in his stride. Then I wanted to stay out of his way. I was a good passenger today. It was a lot of fun." 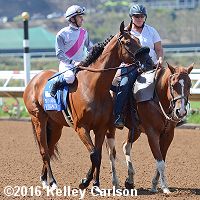 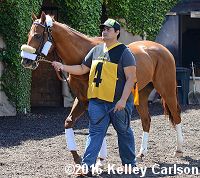 Left: Second place finisher Vyjack in the post parade. Jockey Flavien Prat said, "He tried. That other horse (Masochistic) was just too fast. But his (Vyjack's) next race will be longer. That will be good for him."

Right: Third place finisher Indexical in the paddock. Jockey Mario Gutierrez said, "What are you going to do?"

Later in the card, a field of 6 California-bred or sired 2-year-old fillies contested the $150,000 Generous Portion Stakes at 6 furlongs on the main track. Jockey Tyler Baze sent 20-1 I'll Be Around to the lead exiting the chute through an opening quarter in 22.19 before 1-2 favorite Miss Sunset took over through a half in 45.82. Entering the lane Miss Sunset opened up a 3 1/2 length lead on 6-1 first time starter How About Zero through 5/8 in 57.79. Kept to task by jockey Fernando Perez, Miss Sunset drew off to win by 5 1/4 lengths in 1:10.46. It was antother 5 1/2 lengths back to 41-1 longest shot Rocketann third.

Miss Sunset in the winner's circle. Winning trainer Jeff Bonde said, "We thought our other horse (You're Late) would show speed, but she stumbled out of the gate and that was that. We told Fernando not to burn her up early, which he did not, and she ran strong the whole way. I don't think she has distance limitations. It looked like she finished very strong to me."