The co-feature on Saturday at Parx Racing near Philadelphia was the $1 million Pennsylvania Derby (G2) for 3-year-olds going 1 1/8 miles on the main track. Conditions were excellent with partly cloudy skies and temperatures in the high 70's. As expected California Chrome was sent off as the 9-10 favorite, winner of the Santa Anita Derby (G1), Kentucky Derby (G1), and Preakness Stakes (G1), but fourth when attempting the Triple Crown sweep in the Belmont Stakes (G1) last out. In to challenge him in the field of 8 included 7-2 second choice Bayern, winner of the Woody Stephens (G2) and Haskell (G1) but last in the Travers (G1), and 11-2 third choice Candy Boy, second in both the Los Alamitos Derby (G2) and West Virginia Derby (G2).

Jockey Martin Garcia sent Bayern to the lead first time past the stands and he set easy fractions of 24.07, 47.89, and 1:10.88 over the fast main track while stalked by California Chrome and 28-1 C J's Awesome. Entering the stretch Garcia asked Bayern for more run and he quickly opened up a 3 length lead at the 1/8 pole through 1 mile in 1:34.47. 7-1 fourth choice Tapiture, 5th early, and Candy Boy, last early, put in strong late rallies but to no avail as Bayern cruised under the line 5 3/4 lengths in front in a new track record time of 1:46.96. It was just a head between 2nd place finisher Tapiture and 3rf place finisher Candy Boy, while California Chrome dropped back through the stretch to finish 6th beaten 7 1/4 lengths.

Also on the card was the Cotillion Stakes (G1) won by Untapable. 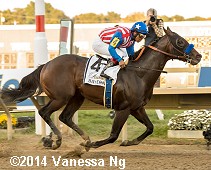 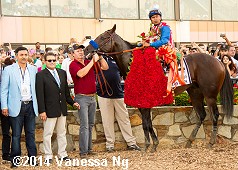 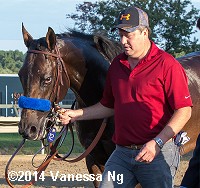 Left: Bayern in the winner's circle. Winning trainer Bob Baffert said, "That was just a powerful performance. He broke well and they let us go and Martin hustled to get away from California Chrome. When California Chrome was pinned in there I knew it was going be tough for California Chrome. He was the target – we weren't the target. When Bayern runs like that, nobody's going to beat him. Like in the Haskell. He doesn't look like a horse that's going to run 1 1/8, 1 1/4; he's sort of a compact horse. He must have a big heart and a big set of lungs and he carries his speed."

Right: Bayern heads back to the barn after the race. 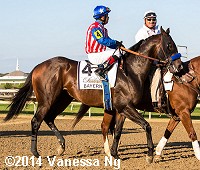 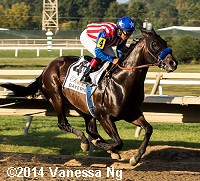 Right: Bayern leads first time by. Baffert added," When he crossed the wire the first thing in my mind, ‘There's little Dude,'", referring to the recently retired Game On Dude. "We're going to get him back (to Santa Anita). We're just 100 yards away from making that decision (of running in the Classic or Dirt Mile). It's an easy walk from our barn to the paddock. I won't make that decision for a while." 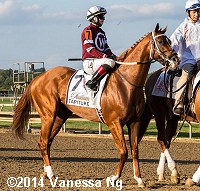 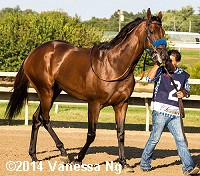 Right: Third place finisher Candy Boy heads over to the paddock before the race. The 11-2 third choice was last for the opening 3/4 mile under jockey Joel Rosario then rallied wide to just miss second money by a head. The John Sadler trainee improved his record to 2 wins 4 seconds, and 2 thirds in 11 starts, earning $786,800 for owner CRK Stable. 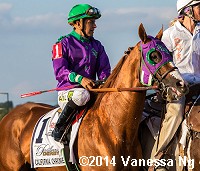 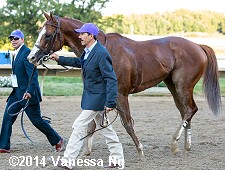 Left: Sixth place finisher and beaten favorite California Chrome post parade. Jockey Victor Espinoza said, "The other riders worried about me, they didn't worry about (Bayern), and I knew I was in trouble in the first turn. They were like blocking in front of me, and it was hard to catch the other horse. Sometimes the other ones don't ride to win, they ride to beat horses. But, I really didn't abuse him too much today. I just let him run his race. I didn't want to override him. He had a long time off. This race, it set it up for the next one."

Right: California Chrome heads back to the barn after the race. Trainer Art Sherman said, "I thought If he could have gone after that horse a little bit earlier  and got out from behind but the other horse kept him down on the rail which I really didn't want, he is a lot more comfortable if you can ease him out it didn't happen and he hasn't run in a long time he probably needed the race. Almost sure we will go to the (Breeders' Cup) Classic. Race under his belt, he'll be a lot stronger and we'll train him over at Los Alamitos, we'll bring him home and get him ready." 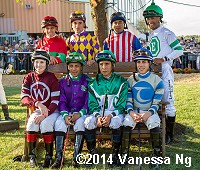 The second stakes race on Saturday was the $300,000 Gallant Bob Stakes (G3) for 3-year-olds sprinting 6 furlongs on the main track. King's Bishop (G1) runner-up Fast Anna was sent off as the 3-5 favorite in the field of 7. In to challenge him included 7-2 second choice Favorite Tale, second in the Jersey Shore (G3) last out, and 11-2 third choice Pure Sensation, off a 3rd place finish in the Better Talk Now Stakes.

Fast Anna and Favorite Tale battled for the lead down the backstretch and around the turn through quick opening fractions of 21.33 and 43.38, while stalked by 7-1 Prudhoe Bay. Entering the stretch, Favorite Tale opened up a 2 length lead through 5/8 in 55.35. Kept to task by jockey John Bisono, Favorite Tale finished 2 1/2 lengths clear in 1:08.16. It was just a neck back to late-running 19-1 Bump Start third. 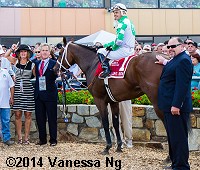 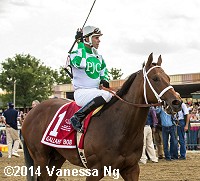 Left: Favorite Tale in the winner's circle. Winning trainer Guadalupe Preciado said, "I think it makes a big difference being home. He trains over here, he runs great over here, I thought we got a good advantage over here. It was a tough race, but there's nothing like being home. He deserves a chance (in the Breeders' Cup Sprint), but let's see how he comes back and go from there."

Right: Favorite Tale returns after the race. Jockey John Bisono said, "I know we were going fast, but I felt real comfortable with him. At the 3/8 pole he went on his own and took the lead. I got him to relax. Turning for home, when he switched leads, I asked him and he went." 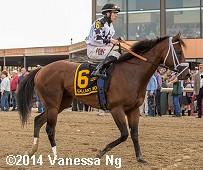 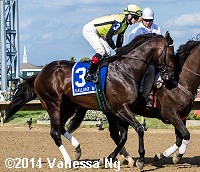 Left: Second place finisher and beaten favorite Fast Anna returns after the race. Trainer Kathy Ritvo said, "(Favorite Tale) got away from us and he was hard to catch. That horse ran a good race. Our horse ran good, too."