The highlight race of the Del Mar summer meeting is the $1 million TVG Pacific Classic (G1), featuring the best older horses of the west coast going 1 1/4 miles, and is a Breeders' Cup Challenge "Win and You're In" qualifier for the Classic to be run over the same track and distance on November 6. Conditions were excellent at the seaside oval, with the 12,655 fans in attendance enjoying cloudy skies and temperatures in the mid 70's. A new single-day record handle of just over $36 million was set, smashing the previous record of $25.87 million set on Pacific Classic day in 2018. A field of 9 went to post on Saturday, with Express Train sent off as the 2-1 favorite off his win in the San Diego Handicap (G2) after finishing 3rd in the Hollywood Gold Cup (G1). In to challenge him included 5-2 second choice Royal Ship, 3rd in the San Diego Handicap after finishing second in the Hollywood Gold Cup, and 4-1 third choice Dr Post, winner of the Monmouth Cup (G3). 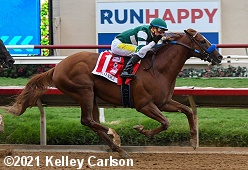 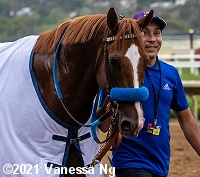 Left: Tripoli in the winner's circle. Winning owner Kostas Hronis said, "It feels great to win it again, and you've got to give all the credit to the barn. Tiago rode a great race. It's the only race he rode today because he wanted to focus on it. This horse has matured and just keeps coming along and today he proved himself. We didn't know if he could go a mile and a quarter, but today we found out."

Right: Tripoli returns to the barn. Winning trainer John Sadler said, "He looked good all the way. He broke on his feet so Tiago was able to tuck him in there and he looked comfortable all the way around. When (Independence Hall) started to slow up we were in a good spot. He had a perfect trip, give the rider a lot of credit. He rode him perfectly." 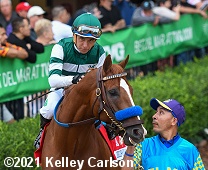 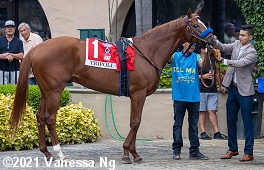 Left: Tripoli heads out to the track before the race. Winning jockey Tiago Pereira said, "John told me before the race to be careful, because there were a lot of runners who had a similar style of running. So, I was okay running right behind the leaders. When it was time to run, I had plenty of horse. But once we got in front, he started looking around, waiting on other horses. I looked around and knew we were not going to get caught. This was my only mount today, so I was really focused. I am so happy."

Right: Tripoli strikes a pose in the paddock. 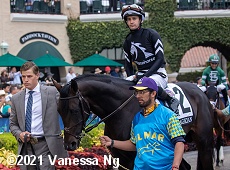 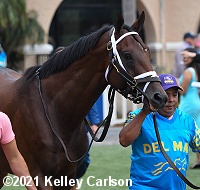 Left: Second place finisher Tizamagician in the paddock before the race. The Richard Mandella trainee improved his record to 5 wins, 8 seconds, and 0 thirds in 19 starts, earning $627,851 for owners MyRacehorse and Spendthrift Farm.

Right: Third place finisher Dr Post in the paddock. Jockey Joel Rosario said, "Yeah, he ran a strange race today. He kind of lost interest on the backstretch, so I thought I had no horse. But when I wheeled him outside, he gave me a strong finish. I don't know how to explain it." 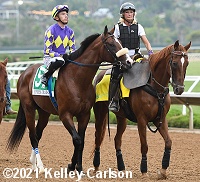 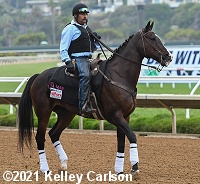 Right: Lava Man at the Pacific Classic. He won the race in 2006 and enjoys life as a stable pony now.

Immediately before the Pacific Classic was the $300,000 Del Mar Oaks (G1) for 3-year-old fillies going 1 1/8 miles on the firm Jimmy Durante turf course. San Clemente (G2) runner-up Going Global was sent off as the 7-5 favorite in the field of 9 over 3-1 second choice Fluffy Socks, second in the Lake George (G3) at Saratoga, and 4-1 third choice Madone, winner of the San Clemente.

Jockey Drayden Van Dyke sent 13-1 Javanica to the lead out of the chute first time by through fractions of 24.35, 48.66, and 1:13.59 while pressed by 69-1 longest shot Feathers and stalked by 6-1 fourth choice Closing Remarks. Turning for home Javanica continued to lead through 1 mile in 1:37.48 before tiring badly. Favorite Going Global, 5th early under Flavien Prat, came through between horses at the 3/16 pole and pulled away to win by a length over Closing Remarks in 1:48.91. It was another 3/4 lengths back to late-running Fluffy Socks third. 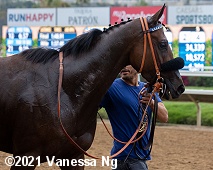 Left: Going Global in the winner's circle. Winning trainer Phil D'Amato said, "We got a dream ride there and this filly showed that she's just the class of the field against a really good bunch of horses. She showed her turn of foot and got it done. She's just special. She takes on every challenge we give her and keeps on going."

Right: Going Global heads back to the barn after the race. 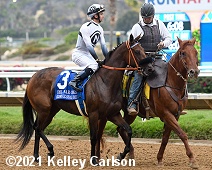 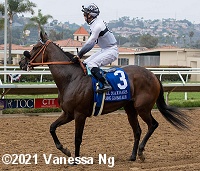 Left: Going Global in the post parade. Winning jockey Flavien Prat said, "What a nice filly. I mean what more can you say about her. She's won five out of six races. I was up a little closer today because the pace was slow early. But she was always traveling well, so I wasn't worried. I had plenty of horse. I was just waiting to find a spot to run. When I asked her she really got going. I don't remember if I've ever done this before (winning three consecutive stakes races), but it's a great day and I hope to keep it going." 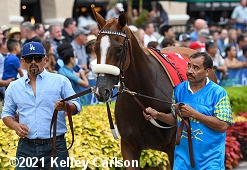 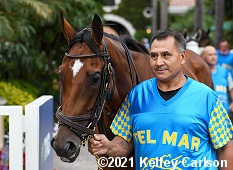 Left: Second place finisher Closing Remarks in the paddock before the race. The Carla Gaines trainee improved her record to 2 wins, 4 seconds, and 1 third in 9 starts, earning $290,500 for owner-breeder Harris Farms.

Right: Third place finisher Fluffy Socks in the paddock. The Chad Brown trainee improved her record to 3 wins, 3 seconds, and 1 third in 9 starts, earning $320,880 for owner-breeder Head of Plains Partners.

The $300,000 Del Mar Mile (G2) featured a short field of 5 older horses going 1 mile on the turf. Last year's winner Mo Forza was the 11-10 favorite over 9-5 second choice Smooth Like Strait, second in the Eddie Read (G2) after winning the Shoemaker Mile (G1), and 5-1 third choice Hit the Road, winner of the Frank Kilroe Mile (G1) before disappointing 5th in the Maker's Mark Mile (G1).

Jockey Juan Hernandez sent 9-1 longest shot Neptune's Storm to the front first time by through fractions of 23.69, 48.52, and 1:12.17 while pressed by Smooth Like Strait and stalked by Hit the Road. Turning for home, Neptune's Storm tired allowing Smooth Like Strait to inherit the lead through 7f in 1:23.56. However, favorite Mo Forza, 4th early under Flavien Prat, came out 4 wide for room and rallied to win by a head in 1:35.03. It was another length back to Hit the Road third. 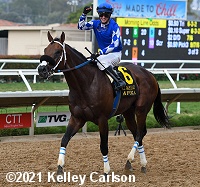 Right: Mo Forza returns after the race. Winning jockey Flavien Prat said, "He did it last year and he did it again this year, so all the credit goes to the trainer. He broke well and then relaxed nicely for me. He really responded when I asked him to run and we were in a sprint from the eighth mile pole home. I knew we got up." 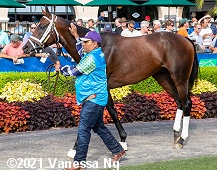 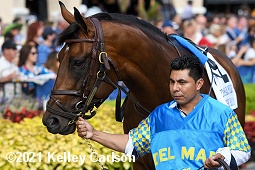 Left: Second place finisher Smooth Like Strait in the paddock. The Mike McCarthy trainee improved his record to 7 wins, 5 seconds, and 2 thirds in 17 starts, earning $1,043,823 for owner-breeder Cannon Thoroughbreds.

Closing out the stakes quintet was the $200,000 Del Mar Handicap (G2) Presented by the Japan Racing Association featuring a field of 11 older horses going 1 3/8 miles on the turf, and is a "Win and You're In" qualifier for the Breeders' Cup Turf. United was sent off as the 2-1 favorite off his win in the Eddie Read (G2). In to challenge him included 7-2 second choice Arklow, 6th in the United Nations (G1) after winning the Louisville (G3), and 4-1 third choice Masteroffoxhounds, 4th in the Manhattan (G1). 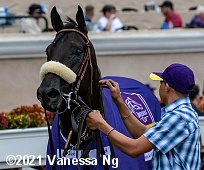 Left: Astronaut in the winner's circle. Winning trainer John Shirreffs said, "Puts a nice bandage on it (loss by favorite Express Train in the Pacific Classic), right. I'm just so happy for Astronaut and his connections; they are really great owners and it's great to win for them. We wanted to run him long, but we weren't sure how long and when he ran so well going a mile and three-quarters (second in the San Juan Capistrano) it seemed like this was possible."

Right: Astronaut heads back to the barn. Winning jockey Victor Espinoza said, "I think the (San Juan Capistrano) was a little too far for him, so we changed the way he ran a little bit today. I just let him break and get into rhythm. If he was happy, I was happy. He wasn't up on the bridle and running so easily that when we got to the half-mile pole, I started to get a little excited. When I asked him, he finished strong for me, and it makes me happy to win this race for John. We have a very good relationship. He's always been there for me and I've been there for him. He's been there for me a little more lately." 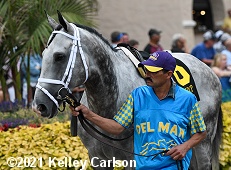 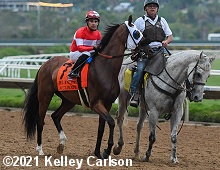 Fourth place finisher and beaten favorite United. The Richard Mandella trainee has a record of 9 wins, 4 seconds, and 1 third in 21 starts, earning $1,693,549 for owner LNJ Foxwoods.

Kicking off the Saturday stakes action was the $100,000 Torrey Pines Stakes (G3) for 3-year-old fillies going 1 mile on the main track. Allowance winner Private Mission was the even-money choice in the field of 7 over 8-5 second choice Forest Caraway, runner-up in last year's Del Mar Debutante (G1), and 13-2 third choice Lady Mystify, winner of her last 2 starts in allowance company.

Jockey Florent Geroux sent Lady Mystify to the lead first time by through fractions of 22.28 and 46.71 while pressed by Private Mission and stalked by 9-1 I'm So Anna. Turning for home Lady Mystify tired allowing Private Mission to take over the lead through 3/4 in 1:11.91. Kept to task by Flavien Prat, Private Mission drew off through the stretch to win by 6 1/2 lengths over I'm So Anna in 1:37.89. It was another 7 3/4 lengths back to Forest Caraway third. 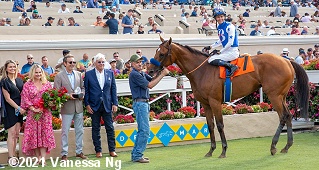 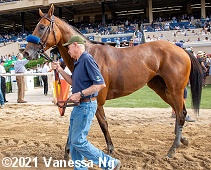 Left: Private Mission in the winner's circle. Winning trainer Bob Baffert said, "We didn't know what she was going to do, but we always thought she could run long. This was a good spot and she passed the route test. That's very important. That's where all the money is."

Right: Private Mission heads back to the barn. Winning jockey Flavien Prat said, "She broke really well from the gate and put me right into the race. She got a little aggressive down the backstretch, so I gave her a little bit of a breather until the turn for home. When I asked her, she really dug in and got it done. She won pretty easily." 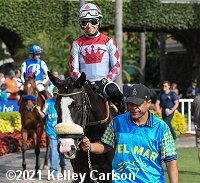 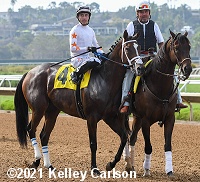 Left: Second place finisher I'm So Anna in the paddock before the race. The Steve Sherman trainee improved her record to 4 wins, 3 seconds, and 3 thirds in 13 starts, earning $30,740 for owner-breeder KMN Racing.