The highlight race of the Del Mar summer meeting is the $500,000 TVG Pacific Classic (G1), featuring the best older horses of the west coast going 1 1/4 miles, and is a Breeders' Cup Challenge "Win and You're In" qualifier for the Classic. Conditions were excellent at the seaside track, with sunny skies and temperatures in the low 80's. A field of 6 went to post on Saturday, with Maximum Security sent off as the 2-5 favorite off his win in the San Diego Handicap (G2) after finishing first (purse money withheld pending investigation) in the Saudi Cup. In to challenge him included 9-2 second choice Higher Power, 2nd in the Hollywood Gold Cup (G2) but third in the San Diego Handicap, and 7-1 third choice Midcourt, 2nd in the San Diego Handicap. 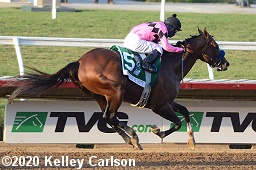 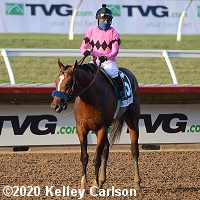 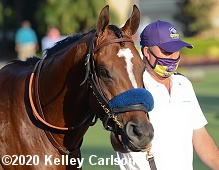 Left: Maximum Security in the winner's circle. Winning owner-breeder Gary West said, "I've got tears in my eyes; I'm so happy. He looked so comfortable out there. There were a lot of good horses in that race, especially last year's winner (Higher Power). Sharp Samurai stuck with us. But we were best. I'm really proud of him."

Right: Maximum Security in the paddock before the race. Winning trainer Bob Baffert said, "We mapped it out that he's the quickest horse, he's ready and now you can ride him with a lot more confidence. Once he took the lead I figured he'd be fine. I just didn't want any quarters in 22 (seconds). 'Max' was relaxing really nice. He was a totally different horse today. Abel (Cedillo) got to know Max last time and I'm happy for him. (Maximum Security) just does things effortlessly. He wasn't even blowing when he came back. I'm just so happy for this horse. It's not his fault what he went through. Today he showed that he is a great horse." 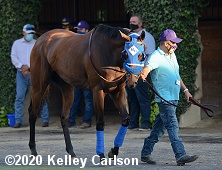 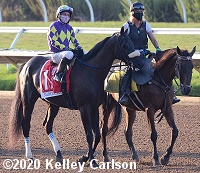 Left: Second place finisher Sharp Samurai in the paddock before the race. The Mark Glatt trainee improved his record to 8 wins, 5 seconds, and 2 thirds in 21 starts, earning $981,270 for owners Red Baron's Barn and Rancho Temescal.

Immediately before the Pacific Classic was the $250,000 Del Mar Oaks (G1) for 3-year-old fillies going 1 1/8 miles on the turf. San Clemente (G2) winner Laura's Light was sent off as the 3-2 favorite in the field of 10 over 4-1 Warren's Showtime, 3rd in the San Clemente, and 5-1 Miss Extra, winner of the Prix de Sandringham (G2) before finishing 9th in the Prix de Diane (G1) at Chantilly.

Jockey Ruben Fuentes sent 34-1 Aqua Seaform Shame to the lead out of the chute through an opening quarter of 24.26 before Laura's Light took over through a half in 48.14 and 3/4 in 1:12.34 while pressed by 39-1 Parkour and stalked by Warren's Showtime. Turning for home, Warren's Showtime gained a short lead through 1 mile in 1:36.76 but 19-1 Red Lark, 6th early under Drayden Van Dyke, came out three wide for room and rallied to win by a length over late-closing 27-1 California Kook in 1:48.64. It was another 1/2 length bak to Warren's Showtime third, while Laura's Light faded to 6th. 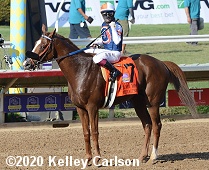 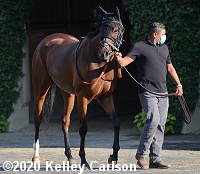 Left: Red Lark in the winner's circle. Winning trainer Paddy Gallagher said, "The allowance race here set her up well and she came out of it good. I was confident in the filly; I knew she was happy and all, but I didn't know if she was good enough. She needed to run the race of her life and she did. Drayden had her in a great spot all the way and when he asked she responded and was good enough."

Right: Red Lark in the paddock before the race. Winning jockey Drayden Van Dyke said, "Out of the gate, we had the perfect spot. I wanted to follow Mike Smith (Warren's Showtime), because I thought his filly would be the one to beat. I knew my filly had a good chance because she was really fit. We got bottled up in her last race. Today, she got to run and she showed how good she is." 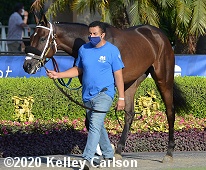 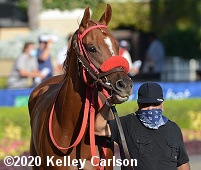 Left: Second place finisher California Kook in the paddock before the race. The Peter Miller trainee improved her record to 2 wins, 3 seconds, and 0 thirds in 8 starts, earning $167,762 for owner-breeders Wachtel Stable and Gary Barber.

Right: Third place finisher Warren's Showtime in the paddock. The Craig Lewis trainee improved her record to 5 wins, 0 seconds, and 5 thirds in 12 starts, earning $460,251 for owner-breeder Benjamin and Sally Warren. 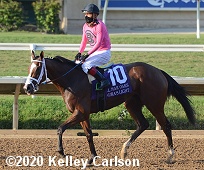 Sixth place finisher and beaten favorite Laura's Light returns after the race. The Peter Miller trainee has a record of 5 wins, 1 second, and 0 thirds in 8 starts, earning $304,870 for owner Gary Barber.

The $200,000 Del Mar Handicap (G2) Presented by the Japan Racing Association featured a field of 11 older horses going 1 3/8 miles on the turf, and is a "Win and You're In" qualifier for the Breeders' Cup Turf. Charles Whittingham (G2) and Eddie Read (G2) winner United was sent off as the 7-10 favorite over 4-1 Red King, winner of the San Juan Capistrano (G3), and 19-2 Proud Pedro, an allowance winner last out. 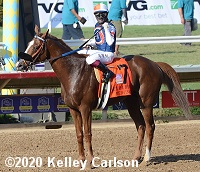 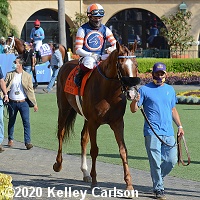 Left: Red King in the winner's circle. Winning trainer Phil d'Amato said, "I could see going along the backstretch that Flavien (Prat on United) was on the inside and Umberto (Rispoli) was about to make that move on the outside. (Rispoli) timed it perfectly. I give all credit to him. After the last race he was so high on this horse. He chose Red King over Originaire and that gave me a lot of confidence that he felt the horse was climbing up the ladder and to win this race is really special."

Right: Red King in the paddock before the race. Winning jockey Umberto Rispoli said, "I didn't like how slow they were going, so I decided to move earlier today. It takes a really good horse to do that, but I knew he had the stamina. I did this when I was riding in Europe. It was close at the finish because he was trying to pull himself up. I am very happy. This horse gave me a Grade 3 win in his last start, and today he gave me a Grade 2. I want to keep it going with him." 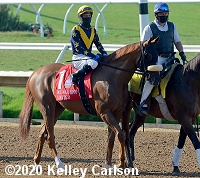 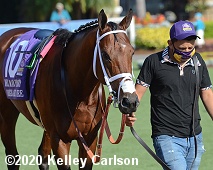 Right: Third place finisher Originaire in the paddock before the race. The Jeff Mullins trainee improved his record to 3 wins, 5 seconds, and 5 thirds in 19 starts, earning $268,158 for owner BG Stables.

Kicking off the stakes action on Saturday was the $100,000 Green Flash Handicap (G3) for older horses sprinting 5 furlongs on the turf. Allowance winner last out Chaos Theory was the 9-5 favorite in the field of 7 over 5-2 Mikes Tiznow, winner of the last 2 runnings of the Albany Stakes at Golden Gate, and 9-2 Baja Sur, 3rd in an allowance after finishing 2nd in the Albany.

Jockey Ricardo Gonzalez sent Mikes Tiznow to lead through fracions of 22.65 and 45.02 while pressed by 11-1 Torosay and stalked by Baja Sur. Mikes Tiznow led to midstretch but Chaos Theory, 4th early under Umberto Rispoli, rallied 3 wide to win by 1 length over Baja Sur in 56.22. It was a nose back to Torosay third. 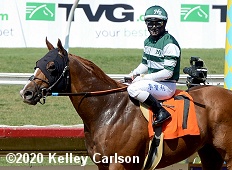 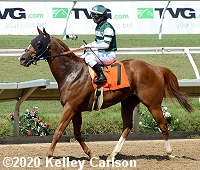 Left: Chaos Theory in the winner's circle. Winning trainer John Sadler said, "We've got a great grass sprint program in California and Santa Anita is actually adding a turf chute. So we have a variety of distances on the grass and this horse is kind of a specialist, 5, 5 1/2 furlongs so I thought he would be a great fit in California, that's why we brought him out. He's a good horse. We were pleased with his race today."

Right: Chaos Theory returns after the race. Winning jockey Umberto Rispoli said, "It was beautiful. He surprised me because he broke so sharply. I figured we'd be a little farther back, but it put us in a great spot just behind the speed. At this distance you can't get too far back. I had a lot of horse turning for home. I thought we'd get there." 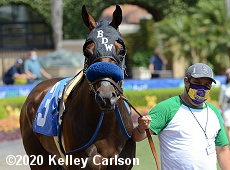 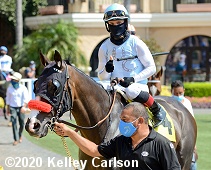 Left: Second place finisher Baja Sur in the paddock before the race. The Blaine Wright trainee improved his record to 5 wins, 3 seconds, and 1 third in 10 starts, earning $176,520 for owners John and Janeane Maryanski and Gerald Schneider.

The $100,000 Torrey Pines Stakes (G3) featured a field of 6 three-year-old fillies going 1 mile on the main track. Allowance winner Harvest Moon was the 3-2 favorite over 2-1 Secret Keeper, undefeated in 2 starts, and 7-2 Aurelia Garland, 3rd in the Iowa Oaks (G3) last out. 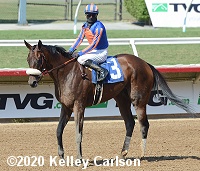 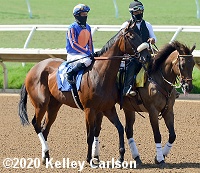 Left: Harvest Moon in the winner's circle. Winning trainer Simon Callaghan said, "We were delighted. This filly means a lot because I trained the mother, which gives it a little extra sentiment. She's an exciting, big filly that we've been super patient with and it's great that she's coming in to doing what she's doing."

Right: Harvest Moon in the post parade. Winning jockey Flavien Prat said, "It was perfect. She was nice and relaxed and I knew they were running very fast up front. She's got speed if you want it, though. Last time I hardly asked her to run. Today, she was just waiting on me. She won it very nicely." 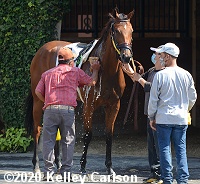 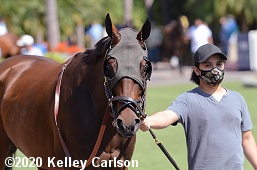 Left: Second place finisher Secret Keeper in the paddock before the race. The Clifford Sise Jr. trainee improved her record to 2 wins and 1 second in 3 starts, earning $80,600 for owner-breeder Pam and Martin Wygod.