The highlight race of the Del Mar meeting is the $1 million TVG Pacific Classic (G1), featuring the best older horses of the west coast going 1 1/4 miles over the Polytrack, and is a Breeders' Cup Challenge "Win and You're In" qualifier for the Classic. 29,319 fans packed the seaside oval on Sunday afternoon under sunny skies and temperatures in the upper 70's. As expected, Game on Dude was sent off as the 8-5 favorite in the field of 12, coming to Del Mar off a 5 race winning streak, including the Hollywood Gold Cup (G1) last out. In to challenge him included 7-2 second choice and last year's winner Dullahan, a close third in the Arlington Handicap (G3) last out, and 6-1 third choice Kettle Corn, winner of the San Diego Handicap (G2).

Jockey Martin Garcia sent Game on Dude to the lead first time past the stands and he set easy fractions of 24.19, 47.96, 1:12.61, and 1:36.61 over the fast Polytrack while stalked by 13-2 fourth choice Delegation and 44-1 Endorsement. At the top of the stretch, Garcia asked Game on Dude for run and the favorite kicked clear, opening up a 6 length advantage at the 1/8 pole. Kettle Corn, last early, unleashed a strong late rally 3 wide but it proved futile as Game On Dude cruised past the post 8 1/2 lengths in front in 2:00.69. There was a 3-way photo for second place, with Kettle Corn nosing out 41-1 You Know I Know third, who nosed out 14-1 Richard's Kid fourth. 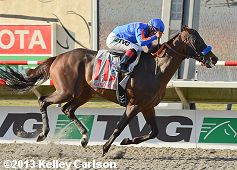 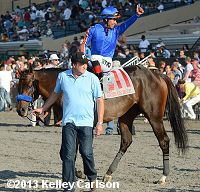 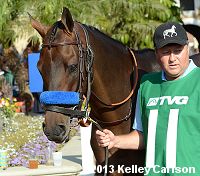 Left: Game On Dude circles after the race. Winning trainer Bob Baffert said, "He has been working well and you could tell he's a different horse this year here. He was just doing everything so smoothly. I loved the way he was in the paddock today. He wasn't too keen he was real relaxed. I ran the race in my mind and there was so much other speed. But at the end of the day, I told Martin: ‘You have the fastest horse so don't be afraid to get bold with him.' He just made a huge statement. It was just great day for horse racing in Southern California."

Right: Game On Dude in the paddock. Winning jockey Martin Garcia, who replaced the injured Joel Rosario who was to replace regular rider Mike Smith, said, "I feel amazing. I still can't believe that I won. This means a lot to me, especially on a horse like that. It was fun out there. He broke really good and got clear. When the other horses went outside, I stayed inside. I didn't have to ask him for anything special coming home. He's a professional. He's knows where he's supposed to go." Co-owner Joe Torre added, "I was nervous. I told Bernie (Schiappa, co-owner) what ever he has, it's catching. I had been pretty calm, and I'd watched Dude run a few times now. But for some reason today I was jumpy as all get out. I can't tell you how exciting it was to watch him. The stretch run, that was goose-bump stuff there." 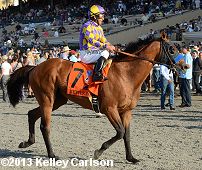 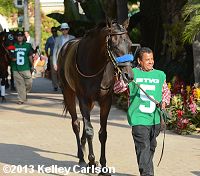 Left: Second place finisher Kettle Corn returns aftee the race. John Sadler, who trains both Kettle Corn and You Know I Know, said, "We were kind of promised some pace, but it didn't happen. When a really good horse like that gets his own pace, he's tough to beat."

Right: Third place finisher You Know I Know in the paddock. The 41-1 longshot was 10th early under jockey Edwin Maldonado, then rallied late to get third beaten 8 1/2 lengths. The John Sadler trainee improved his record to 5 wins, 1 second, and 4 thirds in 18 starts, earning $329,830 for owners Anthony Chacon and Paul Mangini Jr.

Kicking off the stakes action on Sunday was the $200,000 Del Mar Mile Handicap (G2) for older horses going 1 mile on the turf. Obviously was sent off as the 3-10 favorite in the short field of just 5, off wins in the American Handicap (G2) and the Shoemaker Mile (G1). In to challenge him included 6-1 second choice Silentio, fifth in the Makers 46 Mile (G1) last out, and 7-1 third choice He Be Fire N Ice, winner of the California Dreamin' Handicap. 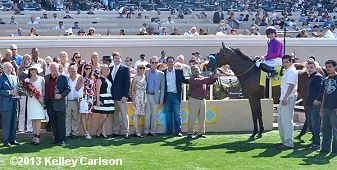 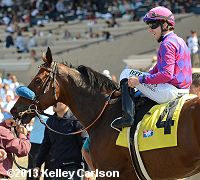 Left: Obviously in the winner's circle. Winning jockey Joe Talamo said, "He came away from there a little slow, but that's not unusual for him. What made it look so noticeable was that (El Commodore) just busted out of there. But I took him wide and let him roll. I look now and see that he went the half in 46 4/5 and I can't believe it. That's as slow as he's ever gone. But he ran hard all the way. I got after him late, but I usually do. He's the kind of horse that if he gets out there on his own, he starts waiting on horses. When they come to him, he'll dig in and fight. But you've got to stay after him."

Right: Obviously returns after the race. Winning trainer Mike Mitchell said, "He didn't open up like he usually does. He didn't have that (winning) margin that he usually has. But he fired and he dug in when (He Be Fire N Ice) came at him. It was a real good horse race. I don't tell Joe how to ride him, it's totally up to him, and I think he found out something today." 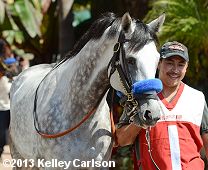 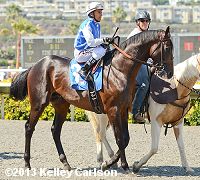 Left: Second place finisher He Be Fire N Ice in the paddock. Jockey Victor Espinoza said, "That wire just came too soon. I couldn't get it to be a little farther along. I saved all the ground I could and then made my run. I thought that was the best way. But that winner runs in 1:32 3/5. What are you going to do with a horse like that?"

Right: Third place finisher Silentio in the post parade. Jockey Rafael Bejarano said, "I thought that (El Commodore) was going to put more pressure on the winner. But after the beginning, he didn't. I needed some help that way and I didn't get it."

The $250,000 Pat O'Brien Stakes (G2) features older horses sprinting 7 furlongs, and is a Win and You're In qualifier for the Breeders' Cup Dirt Mile. Santa Anita Derby (G1) winner Goldencents was sent off as the 9-10 favorite in the field of 12, off a close second in the Bing Crosby (G1) last out. In to challenge him included 7-1 second choice Fed Biz, off his fourth place finish in the Eddie Read (G1), and 8-1 third choice Drill, fourth in each of his last four starts including the Triple Bend Handicap (G1) last out. 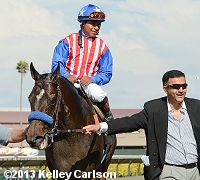 Left: Fed Biz in the winner's circle. Trainer Bob Baffert said, "It was fun watching Fed Biz put it together. We've always been so high on him. He was very explosive in the stretch. That was a breakthrough race. He's a miler, but he loves this surface. He's been working with Paynter and just breezing over it. I told Martin to be patient and hopefully the speed will come back to you. We got a great run today."

Right: Fed Biz returns after the race. Jockey Martin Garcia said, "I just waited for the stretch, then I let him do his own thing. He knew when to go and he knew what to do." Owner Kaleem Shah added, "Bob has always thought very highly of the horse. It was nice to see him come through." 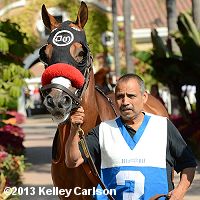 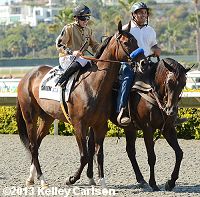 Left: Second place finisher and beaten favorite Goldencents in the paddock before the race. Jockey Pat Valenzuela said, "We got away a little slow and we couldn't get lucky. And then the winner sets a track record."