A number of Rebel Stakes (G2) contenders galloped over Oaklawn Park's 1 mile oval on Thursday and Friday morning. Conditions were excellent Thursday with clear skies and temperatures in the low 60's during training hours, however rain on Wednesday and overnight downgraded the track to "good". Friday morning was clear and sunny with a fast track, but much cooler temperatures in the mid 40's.

The Rebel, originally scheduled as a $1 million race at 1 1/16 miles, was split into 2 divisions worth $750,000 each, due to the 19 horses that made final entry. Under the Kentucky Derby Championship Series rules, the awarded points were reduced to 37.5, 15, 7.5, and 8.75 for the first four finishers in each division, given that the purse of each division is 3/4 the original. Probable post time for the first division of the Rebel, the eighth of 11 races, is 4:57 p.m. (Central). Probable post time for the second division of the Rebel, which goes as race 10, is 6:06 p.m. Doors open Saturday at 11 a.m., with first post 1:05 p.m. Clear skies and highs in the upper 50s are predicted Saturday. Weather permitting, the infield will be open. 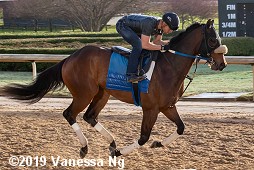 Captain Von Trapp drew the outside post 10 in the second division. Ramon Vazquez rides the 15-1 shot for trainer Steve Asmussen. He comes here off his maiden win on February 8 over the Oaklawn course. 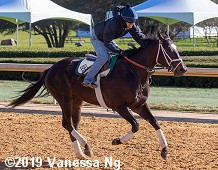 Classy John drew post 7 in the first division. Jockey David Cohen will be in the irons aboard the 15-1 shot for trainer Dallas Stewart. He comes here off a 2nd place finish in the Louisiana-Bred Premier Night Prince Stakes at Delta Downs. 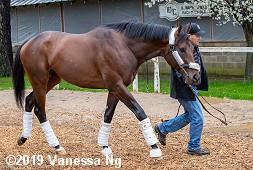 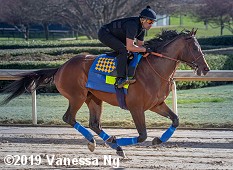 Game Winner galloped once around. Jimmy Barnes, assistant to trainer Bob Baffert said, "I'd say we galloped just a little over a mile, probably a mile. We just went straight on, once around, and pulled up. Very good. Looked awesome on the track. Couldn't be happier. They went over the surface very nice. Usually our ship-ins, our first day, that's what we do. We just take it easy. Just let them get a look of things." He was installed the 4-5 program favorite for the second division (10 entrants). 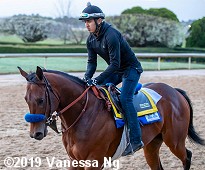 Galilean is one of two horses trained by Jerry Hollendorfer who made the trip from California. Hollendorfer said, "They're coming in good shape and doing good on their training. He's a very good prospect for us going on. We particularly like the last race that he had. We thought that he ran a very good race." Flavien Prat gets the call aboard the 3-1 second choice in the first division. 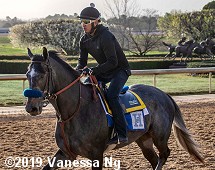 Gunmetal Gray is the second of two Hollendorfer trainees. Hollendorfer said, "I haven't looked at the race and won't for a day or so. I'll try to figure out where all the speed is and talk with my rider and see if we can make a basic plan to run the race and see if it works out." Flavien Prat rides the 10-1 shot in the second division. 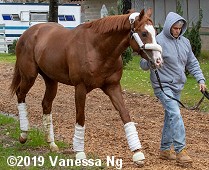 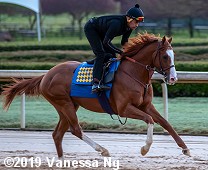 Improbable galloped once around. Jimmy Barnes, assistant to trainer Bob Baffert said, "It's tough in California right now. Hopefully, they'll get things worked out. This time it ended up working better for us because we were going to run both in the San Felipe, so this way they run apart. Thank God for Oaklawn. They had enough horses and enough money to split the race. They came through for us. That was awesome." He is the 3-5 program favorite for the Rebel's first division (nine entrants). 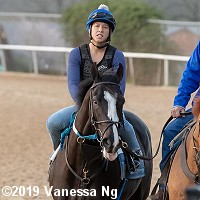 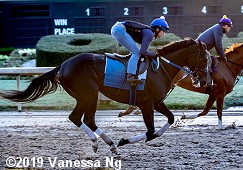 Long Range Toddy is a 10-1 shot in the first division for trainer Steve Asmussen and jockey Jon Court. He comes here off a 3rd place finish in the Southwest Stakes (G3). 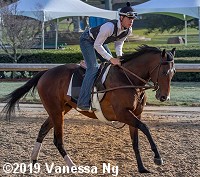 Omaha Beach is the 7-2 second choice in the second division. Mike Smith will be in the irons out of post 6 for trainer Richard Mandella. He broke his maiden at 5th asking last out at Santa Anita and makes his stakes debut here. 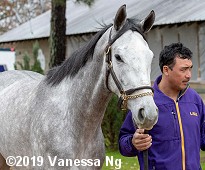 Parsimony was supposed to run in the San Felipe but was shipped here by trainer Doug O'Neill when that race was cancelled. O'Neill said, "The split helped us here because we wouldn't have got in, obviously, if they didn't split. We thought long and hard about the expense of getting him there. He worked tremendous the other day at San Luis Rey Downs, and we thought we would roll the dice." Mario Gutierrez gets the call aboard the 30-1 longshot in the second division. 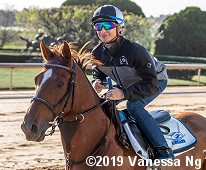 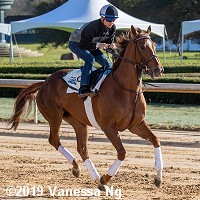 Eskimo Kisses is the 5-1 second choice in the Azeri Stakes (G2) on the Rebel undercard. Jockey Alex Canchari gets the call out of post 4 for trainer Ken McPeek. She has not raced since disappointing in 7th in the Spinster (G1) at Keeneland after winning the Alabama (G1) at Saratoga. 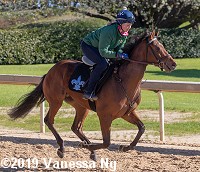 Easy Shot drew post 4 in the first division of the Rebel for trainer Keith Desormeaux and will have jockey Richard Eramia riding the 6-1 shot. He comes here off a 3rd place finish in the Robert B. Lewis (G3). 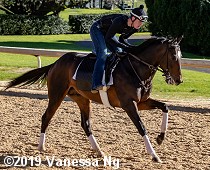 Extra Hope drew post 1 in the first division of the Rebel for trainer Richard Mandella and will have jockey Mike Smith aboard the 15-1 shot. He won a Santa Anita allowance last out after finishing 3rd in the CashCall Futurity (G1) at Los Alamitos. 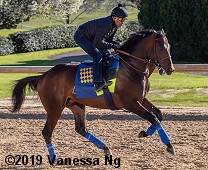 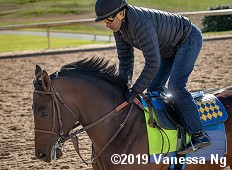 Game Winner is the 4-5 morning line favorite for the second division of the Rebel Stakes. Joel Rosario will be in the irons out of post 5 for trainer Bob Baffert. 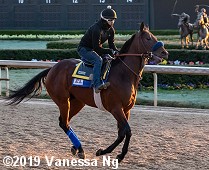 Galilean is in the first division of the Rebel. Trainer Jerry Hollendorfer said, "Galilean, the original plan was to run in the Rebel. We had considered several different races for Gunmetal Gray, including the San Felipe, which was canceled. Once we found out the availability might be to split the race, then we were interested in sending Gunmetal Gray there." He is the 3-1 second choice out of post 8 with Flavien Prat aboard. 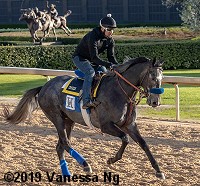 Gunmetal Gray is 10-1 in the second division of the Rebel for Hollendorfer and will break from post 8 with Flavien Prat aboard. He finished 2nd in the Robert B. Lewis (G3) after winning the Sham Stakes (G3). 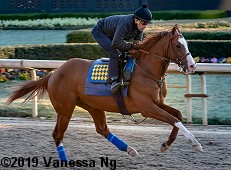 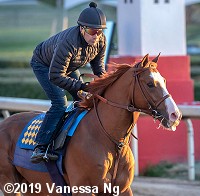 Improbable is the 3-5 morning line favorite for the Rebel's first division and drew the outside post 9 with Drayden Van Dyke aboard. He is undefeated in 3 starts including the CashCall Futurity (G1) last out. 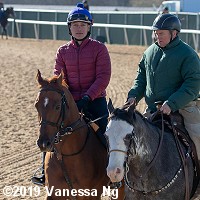 Giant Expectations is the 5-2 morning line favorite for the Essex Stakes for the older horses which will be run between the divisions of the Rebel. He drew post 8 for trainer Peter Eurton with Joel Rosario aboard. He was 3rd in the San Pasqual (G3) after finishing 5th in the Breeders' Cup Dirt Mile (G1). 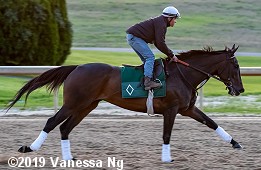 Elate drew post 5 as the 8-5 second choice in the Azeri Stakes for trainer Bill Mott and will have Jose Ortiz aboard. She is unraced since finishing 2nd in the Personal Ensign (G1) at Saratoga.

Looking across the stretch toward the infield saddling area.

Back at the barns.