Cloudy skies and wet conditions greeted the 100,075 fans who came out to Churchill Downs on Friday afternoon for the Kentucky Oaks (G1). Rain all day Thursday and overnight left a sloppy track and yielding turf course for the five undercard stakes events as well as the Oaks. As always, Derby weekend gathers together some of the top horses from all over the country, to compete in the various divisions similar to the Breeders' Cup. Get the Oaks results and photos here.

Although I was not able to get a photo credential this year, I was able to join Jane Dempsey's Kentucky Derby Junket to get photos. Many thanks to her help so I could still cover the Derby and Oaks as in the past.

Kicking off the stakes action on Friday was the $100,000 Alysheba Stakes (G3), a 1 1/16 mile event over the main track for older horses. 3-1 second choice Wandering Boy battled up front with 2-1 favorite and undefeated Half Ours through an initial quarter in 23.71, and then the favorite allowed the pacesetter to pull away by a length and a half down the backstretch through a half in 48.09. John Velazquez asked Half Ours for run entering the stretch through 3/4 in 1:12.86, but Corey Nakatani aboard Wanderin Boy was already pulling away. Wanderin Boy finished 4 1/4 lengths clear of Half Ours at the line, and it was another 1 1/2 lengths back to 7-1 Student Council in third, in a running time of 1:43.45 over the sloppy, sealed track. 9-2 third choice Perfect Drift was fourth.
Full results chart from DRF 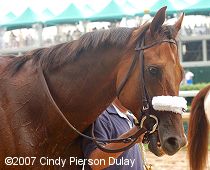 Wanderin Boy heads back to the barn after the race. Winning jockey Corey Nakatani said, "He's a very athletic horse. He did it the right way. Nick (Zito) told me to put him on the lead. I said OK, that's fine. And that's what we did. It's a tribute to Nick and his team what they've done with the horse." Trainer Nick Zito said they would aim for the Stephen Foster Handicap. John Velazquez aboard beaten favorite Half Ours said, "I think the winner really moved up on the wet track. This was the first time he had been over a track like this but you really can't take anything away from the winner. My horse seemed to have everything against him today though. He had to get beat someday. It's unfortunate that he got beat on a track that he didn't care for but he still ran good."

A field of eight 3-year-old fillies went to post in the $150,000 Edgewood Stakes at 1 1/16 miles on the turf. 29-1 longest shot Queen of the Ridge and 8-5 favorite Moonee Ponds contested the pace up front through fractions of 23.82 and 48.70 over the yielding course. Rounding the far turn, Queen of the Ridge faded from contention as Moonee Ponds inherited the lead through 3/4 in 1:11.26. However, the race had set up for the closers. Moonee Ponds held the lead with a furlong to go but 8-1 Swingit, who raced at the rear of the field early, closed well down the center of the course and got up for the win by a head over another closer, 26-1 Luna Dorada, in 1:43.99. It was 2 1/2 lengths more back to 5-2 second choice Good Mood in third, and 1 3/4 more back to Moonee Ponds in fourth.
Full results chart` 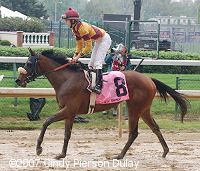 Swingit returns after winning the Edgewood. Winning trainer Hal Wiggins said, "I thought she would handle the softer going today. She won at Keeneland last year, and that track is softer than Churchill even when they call it firm. She had two weeks between races when she won, so we followed that same pattern here. She loves the outside and it worked out for us. I'll give her five or six weeks off now and look for a graded race for her." Thomas Proctor, trainer of beaten favorite Moonee Ponds said, "Any time it´s wet like that, it´s hard to be that close to the lead. Running with the two (longshot Queen of the Ridge) didn´t really help her. The filly who won it is good; she won a stake at Keeneland last fall."

The $150,000 Aegon Turf Sprint (G3) featured eight older horses sprinting 5 furlongs on the turf course. 2-1 favorite Unbridled Sidney contested the lead for the first half mile with 17-1 shot Chief What It Is through fractions of 21.88 and 45.12 before both faded badly from the hot pace. 7-2 second choice Gaff, who stalked the pace in third early and out wide away from trouble, took over the lead inside the 1/8 pole and drew away to a 1 1/4 length victory over late-running 5-1 Ellwood and Jake in a time of 56.84. It was just 3/4 lengths back to 6-1 Congo King in third. Unbridled Sidney faded to sixth.
Full results chart 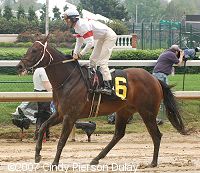 Gaff and John Velazquez return after winning the Aegon Turf Sprint. Winning jockey John Velazquez said, "He ran a perfect race. He seemed to like the soft course. We thought the course was going to better on the outside so I kept him as the ground felt better out there. We were trying to stay away from the rail and it worked out great." Robby Albarado aboard beaten favorite Unbridled Sidney said, "She just got hooked all the way around there. I could never give her a breather. She's been off awhile, and I wanted to get her by herself and let her catch her breath for a second effort."

Only 6 older fillies and mares entered the $300,000 Louisville Breeders' Cup (G2) at 1 1/16 miles on the sloppy main track. 12-1 longest shot Fiery Pursuit was loose on the lead right out of the gate and set a pace of 23.77 and 47.84 while being chased by 6-5 favorite Indian Vale down the backstretch. Entering the stretch, she stubbornly held the lead as 5-2 second choice Asi Siempre closed well after circling the field 4 wide on the turn. In the final strides Fiery Pursuit dug in to hold off Asi Siempre by a head in 1:44.11. It was 3/4 length back to 7-1 Baghdaria in third, while Indian Vale was fourth.
Full results chart 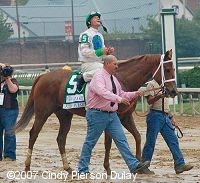 Calvin Borel celebrates his win aboard Fiery Pursuit. Borel said, "Mr. Lukas (trainer) wanted her on the lead, even if I had to use her to get it. He said get the lead no matter how fast you have to go to get it. Once she made the lead, she settled for me. The favorite (Indian Vale) came up to us, and I shook up my filly and she took off again. After that I knew we were okay. The others were coming, and she jumped the gate tracks at the 1/16 pole, and that threw her off stride. But she dug in and kept going to the wire." John Velazquez aboard beaten favorite Indian Vale said, "She was well placed and I was holding her together up there. Then I asked her for it and she couldn't give me anything, she couldn't get hold of the track. She was slipping and sliding all over the place and we just fell out of it."

The $150,000 Crown Royal American Turf (G3) is the penultimate stakes race on Oaks day, featuring a field of ten 3-year-olds going 1 1/16 miles on the turf. 17-1 Jazz Quest contested the pace with 9-2 Duveen through fractions of 24.70, 50.09, and 1:14.98 while being stalked by 3-1 favorite Marcavelly. Around the far turn, Duveen moved up to the lead going 4 wide, and then through the stretch, was all out to hold off late-running 7-2 second choice Whatsthescript by 1/2 a length in 1:44.03 over the yielding course. It was another 1/2 a length back to pacesetter Jazz Quest in third, while favorite Marcavelly failed to fire late, finishing fourth.
Full results chart 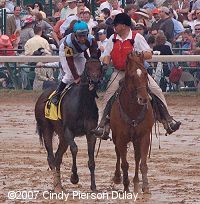 Duveen returns after the Crown Royal American Turf. Winning jockey Mark Guidry, who won his 5000th race earlier in the card, said, "This is a really nice colt. I told everybody a month ago that he would win this race. I thought there would be a better pace today. He was fresh today and he was really pumped up in the post parade. I tried to keep him as relaxed as possible and when we turned for home, he really exploded for me. I think he has a great future." Bill Mott, trainer of beaten favorite Marcavelly said, "The big crowd may have had something to do with it because he was very rank and wouldn't settle for Edgar (Prado). He was more anxious than we would have liked him to be. Edgar had to muscle him back early. (The soft turf) could have been a factor, but the big thing was how anxious and rank he was."