The 130th Kentucky Oaks featured eleven three-year-old fillies, down from twelve after Breeders' Cup Juvenile Fillies winner Halfbridled scratched the morning of the race. The Grade 1 event for a purse of $572,000 was at a distance of 1 1/8 miles over the muddy main track at Churchill Downs before a crowd of 98,445. Heavy rains early in the day had cleared and the sun was peeking through by post time for the Oaks. Sent off as the lukewarm 5-2 favorite was Ashado, runner-up to Halfbridled last year in both the Breeders' Cup and in Eclipse Award voting for top 2-year-old filly.

As expected, 7-2 second choice Madcap Escapade got to the front right away and was loose on the lead through a ground-saving trip, taking the field through blistering fractions of 23.29, 46.00 (the fastest half in Oaks history), and 1:09.99, pulling away by as many as 4 1/2 lengths ahead of the stalker Ashado. Turning for home, she continued to hold the lead after a mile in 1:36.73, but the fast pace and deep going along the rail had taken its toll. In the final furlong she weakened badly and was easily passed. 17-1 longshot Island Sand, who was back in tenth early after a bumpy start, split horses entering the lane and went five wide, closing well to get second. They were no match for Ashado, who raced off the rail in the 2 or 3 path most of the way and was full of run. She easily held off Island Sand's late bid after easing past the pacesetter inside the last furlong to win by 1 1/4 lengths in 1:50.81. It was another 1 3/4 lengths back from Island Sand to Madcap Escapade in third.

There were five other stakes races on the card with the Oaks. Full results for all of them with photos are here. 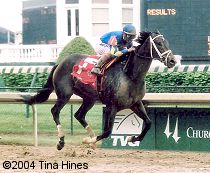 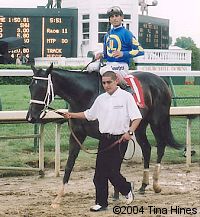 Oaks winner Ashado after the race. Winning trainer Todd Pletcher said, "I was very confident, especially when she was in second on the backside and eased off the rail. When they turned for home, I was more concerned with the three (Island Sand)." Asked if he had considered entering her in the Derby instead of the Oaks, trainer Todd Pletcher said, "No, there was never any real consideration about running her in the Kentucky Derby. Some people were saying this was a tougher race than the Derby. But it was a filly race. When you run fillies against colts, you've got to be dominating. Look at the fillies that have beaten colts in the Derby and you'll see fillies that were dominant. My filly is very good and has been doing very well, but she hasn't reached the dominant stage yet. There will be second thoughts about running her here instead of the Derby. I don't know what we'll do with her next. We'll see how things are back at the barn and how she's doing. She's a big, strong filly and she might be able to match up with the colts. The Preakness? We'll keep our options open." 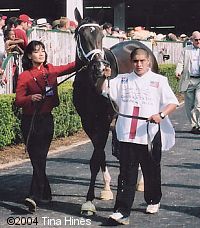 Ashado enters the paddock for the Oaks. Winning jockey John Velazquez said, "That was beautiful, I couldn't have asked for a better trip. I was closing the way I thought I would. Madcap Escapade wasn't going to get away from us. I wasn't afraid of her at all. We were at a good striking distance. My filly responded to everything I asked for. And she runs on anything. I've always loved her. She was a little late last time; I didn't ride her in her last two, though. These people (trainer Todd Pletcher and owner Starlight Stables) have been so good to me, so loyal, I'm thankful to be back on her." 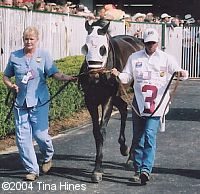 Second place finisher Island Sand. Trainer Larry Jones said, "I'm on top of the world, although I could be just a little more on top! Really, the Kentucky Oaks is the second greatest race in the world...of course, the Kentucky Derby is the greatest. I knew Ashado was going to be the horse to beat here. Going in, I knew if we could beat Ashado, we could win. Her next start? Don't know. She's headed for Ellis Park tonight. We'll celebrate on the way home, maybe stop at McDonald's."

Jockey Terry Thompson said, "My filly kept running all the way to the wire, but (Ashado) felt us coming and picked it up again. Larry and I talked and we knew our filly had the speed to go with these horses, but we also knew that we might not have enough at the end. We decided to take her back and it set up just like we thought it would. We had a clean trip and I was able to save ground along the rail. At the eighth pole I really thought we were going to get there, but the winner just kept going. It's a real honor to be part of a race like this. I'm thrilled." 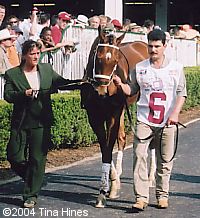 Third place finisher and pacesetter Madcap Escapade. Her trainer Frank Brothers said, "The plan was to go with what got us here and that was speed. I wouldn't have written the script any differently other than she would've held on. We did what we did and it just wasn't good enough today. That's all you can ask her to do. It was probably a bit far for her."

Jockey Jerry Bailey, aboard Madcap Escapade said that "She broke running and she felt comfortable all the way. The fractions were quick, but not ridiculously fast. She ran as hard as she could and she probably just can’t go that far against these kind."