2014 Oaklawn Racing Festival of the South

Run immediately before the Arkansas Derby, the $600,000 Oaklawn Handicap (G2) featured a field of 6 older horses going 1 1/8 miles on the main track. Breeders' Cup Classic runner-up Will Take Charge was sent off as the 2-5 favorite off a second place finish in the Santa Anita Handicap (G1). In to challenge him included 3-1 second choice Golden Lad, winner of the Razorback Handicap (G3), the local prep for this event, and 11-2 third choice Revolutionary, 7th in the Donn Handicap (G1) after winning an allowance at Gulfstream.

25-1 Right to Vote went to the lead first time by and set fractions of 23.43, 47.66, and 1:11.63 whle stalked by Golden Lad and 18-1 Carve. Turning for home, jockey Luis Saez sent Will Take Charge, 6th early, out 4 wide for room and he gained the lead at the 1/8 pole through 1 mile in 1:36.87. Revolutionary attempted to close from 5th but Will Take Charge held him off by 3/4 length in 1:49.55 over the fast track. It was another 1/2 length back to Carve third. There was a stewards' inquiry into the stretch run and claims of interference by both Mike Smith (Revolutionary) and Jesus Castanon (Carve) against Luis Saez (Will Take Charge), but the result was allowed to stand.

Also check out Danza winning the Arkansas Derby and Close Hatches winning the Apple Blossom during the Racing Festival of the South at Oaklawn. 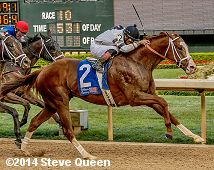 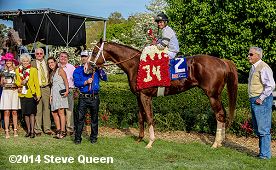 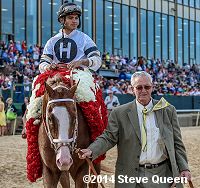 Left: Will Take Charge in the winner's circle with trainer D. Wayne Lukas on the far right.

Right: Owner Willis D. Horton leads Will Take Charge to the winner's circle. Horton said, "Of course the stewards took their time about making it come true, and they did.  I feel good (after the inquiry), I feel better than I did before the race. I’ve got a little life in me now. I’m sure proud of what just happened. Really the other horse was coming out as he was drifting in. There was a brush there, but it didn’t amount to anything." 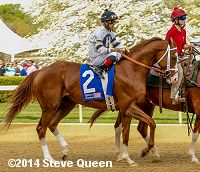 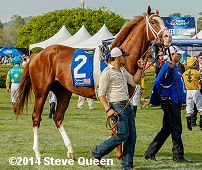 Left: Will Take Charge in the post parade. Winning jockey Luis Saez said, "At the 1/2 mile pole, I had a lot of horse and he wanted to run. I let him go comfortably, just the way he wanted to. When I came into the stretch, this horse gave me what he had and he was comfortable. He didn't want to change leads, that's why he went in a little bit. He came into the stretch and he was lugging in a little bit, but I straightened up pretty well and I didn't put him in any type of danger.  I give a lot of credit to Wayne Lukas. This horse felt wonderful. He had a lot of power and strength."

Right: Will Take Charge in the infield walking ring before the race. 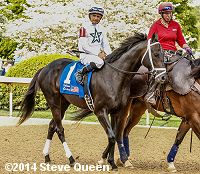 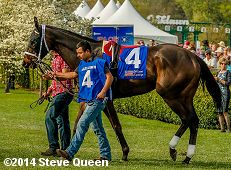 Left: Second place finisher Revolutionary in the post parade. Elliott Walden of owner WinStar Farm said, "It was close. I think (Mike Smith) had to check fro a split second and we ending losing by a 1/2 length. It was worth looking at. Will Take Charge is a great horse and our horse ran really well." Trainer Todd Pletcher added, "I thought he ran terrific and it was a little unlucky that things got tight. He tried to re-rally but couldn’t get there."

Right: Third place finisher Carve in the infield walking ring. The 18-1 shot stalked the pace in third under jockey Jesus Castanon but could not improve late, beaten 1 1/4 lengths. The Brad Cox trainee improved his record to 3 wins, 1 second, and 4 thirds in 11 starts, earning $348,731 for owner Mike Langford. 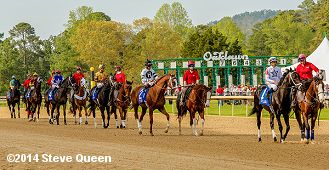 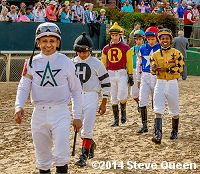 Right: The jockeys for the Oaklawn Handicap head out to the infield walking ring. Jockey Mike Smith aboard runner-up Revolutionary said, "My horse ran really great. (Will Take Charge) came over a little bit. I had to wait. I would have liked to see what the outcome was (otherwise) because I only got beat a neck, and two jumps past the wire I was in front. It was a 50-50 call and I understand that. It was a judgment call and it just didn't go my way." 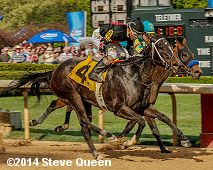 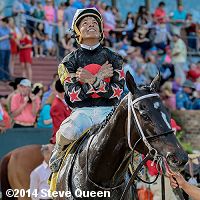 Winning trainer Steve Asmussen said, "She ran a really good race and she ran her race today. This is her second stakes win of the meet and I’m proud of her." She improved to three wins from seven starts and increased her earnings to $161,210.