The feature race at Saratoga on the Thursday of Travers week is the $150,000 New York Turf Writers Cup (G1) a hurdle handicap for older horses going 2 3/8 miles over National Fences. It was sunny with temperatures in the high 70s, however rain on Wednesday downgraded the turf courses to yielding. Winston C was sent off as the 1-2 favorite in the field of 8 off his win in the A.P. Smithwick Memorial Steeplechase (G1). In to challenge him included 11-2 second choice Gibralfar, 4th in the Smithwick after finishing 6th in the Iroquois Hurdle (G1) at Percy Warner, and 13-2 third choice Hinterland, 3rd in the Smithwick.

Jockey Gerard Galligan sent 15-1 All the Way Jose to the front and he led for the opening 2 miles while pressed by 12-1 Peppay le Pugh and stalked by Gibralfaro. Turning for home, the pacesetters tired as Hinterland moved up to briefly lead. However, favorite Winston C, 6th early under Thomas Garner, came out for room and took over at the 3/16 pole, powering away to win by 8 3/4 lengths over Gibralfaro in 4:38.16. It was a nose back to 15-1 Belisarius third. 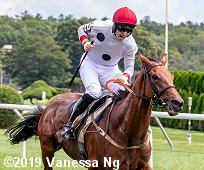 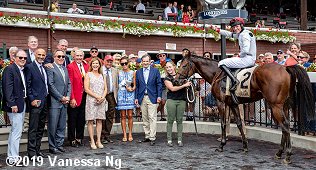 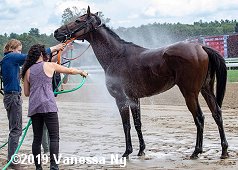 Left: Winston C in the winner's circle. Winning trainer Jonathan Sheppard said, "Ten pounds is a pretty good shift but he was able to overcome it fairly easily. They were just a tad closer earlier this time. It was probably a little slower pace and he was able to have some closer contact to the leaders. It never gets old. Each race is a new challenge. He's a very superior horse, I think. We just have to keep his trainer from messing up and we'll be in business."

Right: Winston C gets hosed off after the race. 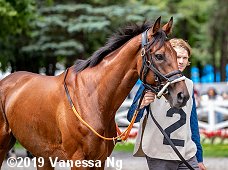 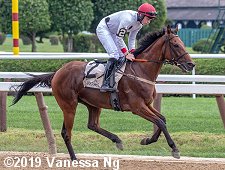 Left: Winston C in the paddock before the race.

Right: Winston C in the post parade. Winning jockey Thomas Garner said, "I had a very willing partner. The horse did everything right. I couldn't put him wrong, really. He's such an honest, classy little horse. I think there is a lot more to come from him. He's still improving. It took a little pressure off, winning the Smithwick, but it added a bit more pressure [because] the Turf Writers and Smithwick [haven't been swept] for a long time. It's definitely something I have enjoyed, especially winning the two, but it was all done by the horse. I was just a passenger." 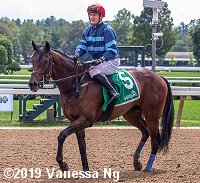 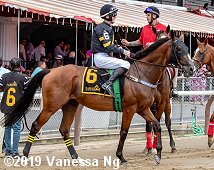 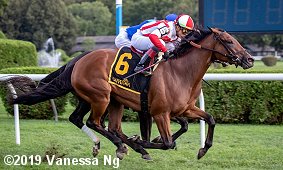 The $100,000 Riskaverse Stakes featured a field of 6 3-year-old fillies going one mile on the inner course. Maiden winner Catch a Bid was sent off as the 9-10 favorite off her 2nd place finish in allowance company, over 3-1 Hotsy Totsy, 3rd in the Sandringham Handicap at Ascot, and 7-2 New and Improved off her debut win. 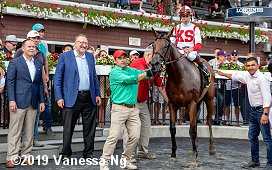 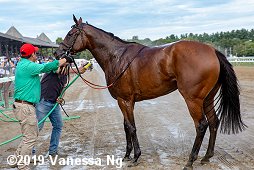 Left: Catch a Bid in the winner's circle. Winning trainer Chad Brown said, "I trained her sire [Real Solution] as well, so this is really special. It's neat to see a mini Real Solution march around the barn. She's a real honest horse and ran well in all three of her first starts. This was Irad's first time on her and he filled in and did a terrific job. She was always in very close striking distance and luckily, she was in close proximity when she turned for home. I still think she's a bit of a miler. I'll probably look at a race like the Pebbles next [September 14]. The runner-up gave a game effort."

Right: Catch a Bid gets hosed off after the race. Winning jockey Irad Ortiz Jr. said, "She's a nice filly. She did everything right. She got a good trip. I just got through, dipped her out and she responded very well. She looks like she could [get some extra distance]." 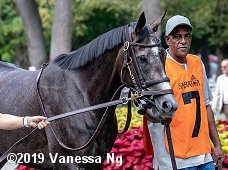 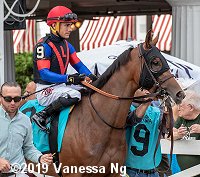 Left: Second place finisher Dalika in the paddock before the race. Jockey Jose Ortiz said, "She ran huge. She got beat by the favorite, who is a nice filly. I rode Varenka before the Lake Placid and we beat [Catch a Bid], and Varenka came back and won the [Grade 2] Lake Placid. I think my filly is decent. She ran a huge race. There was no pace in the race, so we were expecting to be close. [Trainer Al Stall] said, 'Don't be afraid to be on the lead and be comfortable.'"