Kicking off the Travers weekend was New York Showcase Day on Friday, featuring 6 stakes worth $1.25 million in total, restricted to New York-breds. Conditions were excellent with clear skies and temperatures in the high 70's. This was also the day for new inductions into the Saratoga Walk of Fame, with this year honoring two-time Triple Crown winning trainer Bob Baffert in the traditional Red Jacket ceremony and plaque unveiling. 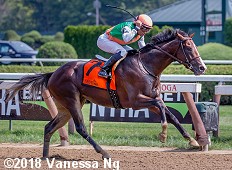 The $250,000 Albany Stakes featured a field of 6 three-year-olds going 1 1/8 miles, one lap of the Saratoga main track. Jockey Joel Rosario sent 9-5 favorite Sea Foam to the lead first time by through fractions of 23.53, 47.51, and 1:11.85 while pressed by 12-1 Spectacular Kid and stalked by 4-1 second choice Singapore Trader. Entering the lane, Sea Foam continued to lead through 1 mile in 1:36.86. 9-4 second choice Evaluator, last early under Manuel Franco, came out 5 wide for the drive and put in a strong late rally but Sea Foam held him off to win by 3/4 length in 1:50.24. It was another 3/4 length back to Singapore Trader third. 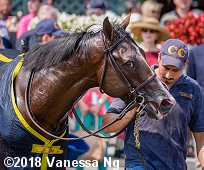 Sea Foam heads back to the barns. Winning trainer Christophe Clement said, "He's always been a nice horse. He was supposed to run at Aqueduct in a race [Damon Runyon] which was canceled. It took him a while to get going, but certainly going longer on the dirt is better for him." Jockey Joel Rosario added,  "Christophe told me to let him be happy wherever he was. He broke sharp out of there and I just let him be where he was. He looked like he showed some speed. He has a nice closing speed. I was happy because I work him in the mornings and he's the type of horse where it doesn't matter how fast you go, he has a good closing speed and when you ask him to go, he just keeps going." 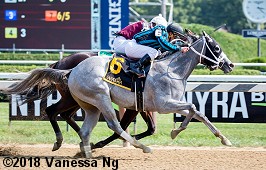 Winning trainer Larry Rivelli said, "It was a great trip. I figured it was going to be between us and [Bankit] and I was confident coming into the race, but I'm glad everything worked out. I talked to Javier before the race and we set him up with a game plan. Most of the runners in this race had won on the front end, so I didn't want him let him get hit with a lot dirt. I told him, 'If you can make the lead, make it, because speed has been going good and he just gave a professional ride. This is the first homebred we've had and we dropped him in New York and he won, so it's exciting." 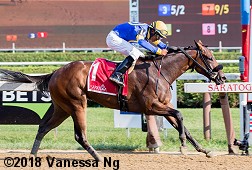 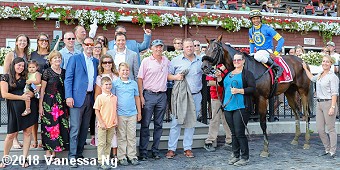 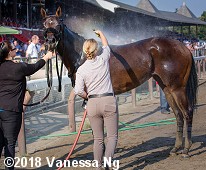 Seeking the Ante gets hosed off after the race. Winning jockey Andre Worrie said,  "The speed [Collegeville Girl] scratched, so I figured I was the only other speed. I went on with it and she got brave and just kept going. The original plan was that the 4 was a little faster, so we said we were going to let her go and get outside, but since that horse scratched I just went on with it." Trainer Jeremiah Englehart added, "As a weanling, she looked like a racehorse. Desert Party gets runners here and there, and I thought she looked like a racehorse for $8,000. I'm going to let my owners really enjoy this one. I think with what she did today the [Lady Finger Stakes] might be a little too quick back, so maybe we'll look at something down towards Belmont." 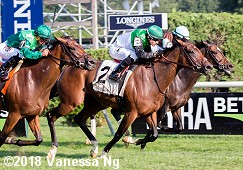 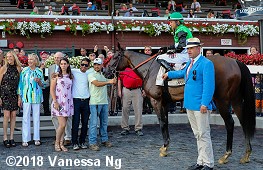 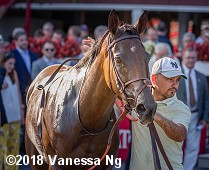 La Moneda heads back to the barns. Winning trainer Tom Morley said, "Brendan [Walsh, previous trainer] told me before she debuted here last year, 'I think I have a New York bred in my barn who can win a graded stakes.' We've taken our time and picked our spots, but she just keeps getting better and better. I think she's good enough to win a graded stakes. But today was the aim, and that was a massive performance and on a track that all day looks like it favored speed. I thought that might helps us with Fifty Five behind us. But the whole way down in front of us, I was worried about catching [Lady Joan]. Junior was very confident. It was a super ride." 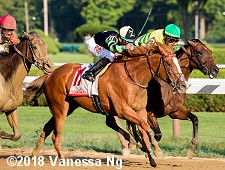 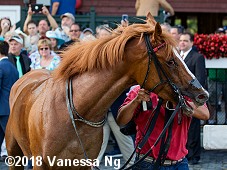 English Soul heads back to the barns. Winning trainer Raymond Handal said, "I didn't think there would be so much scatter across the track. I thought there would be one, maybe two [horses] out there. She broke well and I told Manny [Franco], 'She doesn't need the lead, but break, get her up there. If they give it to you, take it. If not, just sit and you can tuck in and be just two wide'. I was a little concerned when I saw her four while into the first turn. That was definitely not ideal. She kind of grabbed the bit on him on the backside. They went in :48 3/5. That's a little quick. At that time she was making a little bit of a move on him. She kind of grabbed the bit, and he did a good job of harnessing that speed, because we didn't want to make a big middle move, but also you do not want to take her stride away from her." 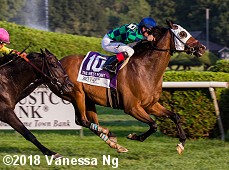 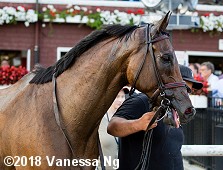 Kharafa heads back to the barns. Winning jockey Dylan Davis said, "There were a lot more speed horses in the race and it set up for him, but he's never missed a beat and he definitely brought his 'A' game today. He really handled the turf course today, and he got it done." Trainer Tim Hills added, "He's nine years old but he just doesn't train like an old horse. He loves what he does. He got a real good trip this time. I'm so happy for Dylan. His dad, Robbie, is one of my all-time favorite riders. He's never done well at Saratoga. In fact, he gets real keyed up with the crowd. It was nice to break through here. We've been talking about retirement, and maybe his vote is to keep doing what he's doing, so we'll see. We'll go through the rest of the New York-bred series and see what happens." 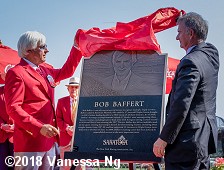 Another tradition on Travers weekend is the Red Jacket Ceremony, for inductions into the Saratoga Walk of Fame. The Walk of Fame, which opened in 2015, honors and showcases the achievements of those who have made significant contributions to the sport of thoroughbred racing. The covered structure houses commemorative plaques, videos and memorabilia honoring various industry leaders, including owners, trainers and jockeys, who have made an indelible mark on thoroughbred racing. The Red Jacket actually began 2 years before the Walk of Fame's opening. This year's newest member is trainer Bob Baffert, one of only 2 trainers to capture multiple Triple Crowns, with American Pharoah in 2015 and Justify this year. He as won 15 Triple Crown races, and has won the trainer Eclipse Award 4 times. He also has 11 Grade 1 wins at Saratoga including 3 Travers Stakes: Point Given in 2001, Arrogate in 2016, and West Coast in 2017. He was inducted into the National Museum of Racing Hall of Fame, located across Union Avenue from the racecourse, in 2009. 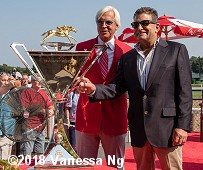 Baffert with his assistant Jimmy Barnes and Justify's Triple Crown Trophy. Baffert said, "I am truly honored to receive this Red Jacket and to be included with such luminaries as Allen Jerkens, Wayne Lukas and Bill Mott. Saratoga is very dear to me and to be recognized in this manner with a plaque in the Walk of Fame is something special. I'd like to thank the New York Racing Association and Chris Kay for this honor as well as for bestowing such recognition upon those individuals within our great sport who have given so much of their own talent and energy to make it possible for me to be here today."

NYRA CEO Chris Kay said, "The Walk of Fame is designed to recognize the men and women who have made outstanding contributions to our sport and who have achieved great success. Bob Baffert is certainly one such individual. Bob won the Triple Crown in 2015 and 2018 after our sport had endured a 37-year drought since the feat had last been achieved. In winning multiple Triple Crowns, he joins Sunny Jim Fitzsimmons as just the second trainer in history to do so. At Saratoga, he has trained back to back Travers winners, including Arrogate, who delivered a record-shattering tour de force victory in 2016, punctuated by an encore performance with West Coast last season. Bob's achievements have firmly established him as one of the most successful trainers in modern history. It is with sincere pleasure that we welcome Bob to the Walk of Fame to take his place alongside the other greats of the game."