The inaugural $200,000 New Orleans Ladies Stakes at the Fair Grounds in New Orleans featured a field of 5 older fillies and mares going 1 1/16 miles on the main track. Conditions were ideal for racing, with sunny skies, a fast track, and temperatures in the mid-60's. The race was written to attract 2009 Horse of the Year, Rachel Alexandra, who spent the winter at the track, and achieved this purpose. Unraced since the Woodward Stakes at Saratoga last September, the undefeated 4-year-old was sent off as the 1-20 favorite. In to challenge the Steve Asmussen-trained daughter of Medaglia d'Oro included 6-1 second choice Clear Sailing, winner of three straight including the Pelleteri Stakes over the same track and distance, and 9-1 third choice Zardana, a stablemate of Zenyatta trained by John Shirreffs, winner of the Bayakoa in December before finishing 4th in the Santa Maria last out at Santa Anita.

Jockey Corey Lanerie sent 43-1 longest shot Fighter Wing to the lead out of the inside post, and was stalked by Rachel Alexandra to her outside for the first 5 furlongs through fractions of 23.84 and 47.72. Zardana sat another 3 lengths behind the pacesetters early. Entering the stretch, jockey Calvin Borel asked Rachel Alexandra for run as the favorite passed the tiring Fighter Wing to take over the lead through 3/4 in 1:12.86. However, Zardana, three wide into the lane, moved up to challenge Rachel Alexandra to her outside. The pair battled through the stretch noses apart, until the 1/16 pole when Zardana gradually pulled away to win by 3/4 lengths in 1:43.55. It was a long 11 1/2 lengths back to 31-1 Unforgotten third.

Update: Sunday afternoon owner Jess Jackson said Rachel Alexandra would not be going to Oaklawn for the Apple Bloosom now. Jackson said, "Yesterday's race while a disappointment, helped us define Rachel Alexandra's racing condition. While she is healthy, just as I had anticipated, she is not in top form. Therefore, I decided today she will not be going to the Oaklawn Invitational on April 9. Steve and I discussed this fully and we now regret we tried to accelerate her training in order meet the Apple Blossom schedule. We have a whole season before us to help define her greatness. She will tell us when her next race will be." 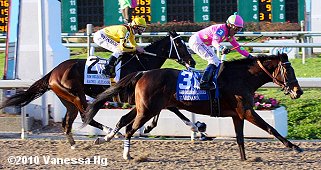 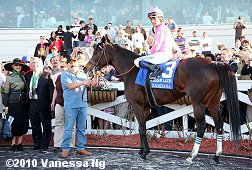 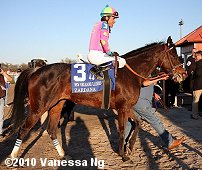 Left: Zardana in the winner's circle. Trainer John Shirreffs was at Santa Anita to saddle the undefeated Zenyatta who won the Santa Margarita Handicap a half-hour after the New Orleans Ladies. Her owner Arnold Zetcher said, "We didn't feel any pressure. We wouldn't have brought her here if we didn't think she could get the job done. She's small but she doesn't back down from a fight. There is nothing easy in this game. Rachel is fabulous; she will be back."

Right: Zardana heads into the winner's circle. Her jockey David Flores said, "We had a picture-perfect trip. The strategy was simply to get her to relax and John (Shirreffs) said she would get the job done. The pace was perfect for my filly. At the 1/2 mile pole I asked her and she responded big. I got after her pretty hard coming home but she is a real warrior. This is a very strong filly, even though she's a bit small. I got a nice hole. I didn't want to let her do too much that first half. I just stayed behind her and saved as much as I could because we were going to need it to beat a big horse like that. I saved as much as I could for the end." 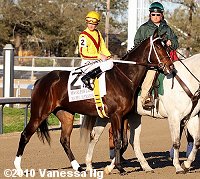 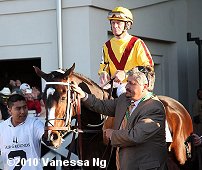 Left: Rachel Alexandra in the post parade with assistant trainer Scott Blasi on the pony with her. Her trainer Steve Asmussen said, "She was strong early and got tired. Very disappointing that she lost. You hate to be in that position, but now that it's over you know it's not something we got away with. I'm just disappointed she didn't win today. It was a lack in fitness and it's our job to have her there and I didn't do it."

Right: Trainer Steve Asmussen leads Rachel Alexandra out of the paddock to the track. When asked if she would go on to the Apple Blossom at Oaklawn, Asmussen added, "Well, if I thought she'd get beat I wouldn't have run her today, so I'm definitely going to be cautious. We just want to do what's right by the mare. You know Calvin and how strongly he feels about her and we'll go from there. She's not where I thought she was and if I had thought she'd get beat she wouldn't run. You take her back, you evaluate her, you see how her mood is, her diet, how she goes back to the racetrack, how she breezes. No crystal ball could see that far ahead." As of Sunday afternoon, they are no longer going to Oaklawn. 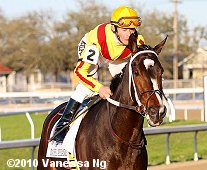 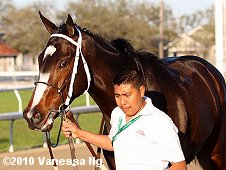 Left: Rachel Alexandra and Calvin Borel return after the race. Borel said, "My little filly tried hard. She needed the race more than anything. I wanted to go on past the speed horse early (Fighter Wing). I'd have got by her anytime and my filly could have gone on but they wanted me to wait and not get into her until the 1/16 pole. You know how I know she's a real racehorse? She was beat when that other horse went by her, but she didn't quit. She dug in and fought right back and stayed with the winner the rest of the way. She was a little rank but going that slow she's going to be rank. I was just trying to save her for the end and have something to finish with. She just got a little tired. I guess I tried to sit on her a little bit longer than I wanted to and it kind of took a bit out of her. She was so tired when I pulled her up. We're shooting for a goal, though, and win, lose or draw, that's the goal we're shooting for. After today you'll see a different filly."

Right: Rachel Alexandra heads back to the barn. 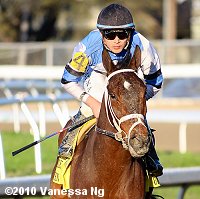 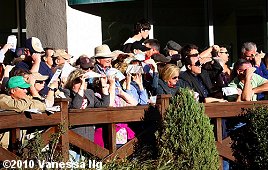 Left: Third place finisher Unforgotten returns after the race. Her jockey Miguel Mena said, "She ran good. She's just a nice filly. She's won a half-million and she shows up every time." Trainer Dallas Stewart added, "She ran good and we got a big piece of it. I'm very pleased."

Right: The crowd of fans around the paddock who came to see Rachel Alexandra.