The feature race at Woodbine on Sunday was the $175,000 Nijinsky Stakes (G2), a 1 1/2 mile tour of the E.P. Taylor Turf Course for older horses prepping for the Northern Dancer Turf and the Pattison Canadian International or Breeders' Cup Turf. It was unusually warm for southern Ontario in late July, with partly cloudy skies and a race time temperature of 31 C (87 F), and the turf rated firm (GoingStick 11.7) with the rail out 30 feet (Lane 3).

Last year's winner Tiz a Slam was sent off as the even-money favorite in the field of 7 off wins in the Louisville Stakes (G3) at Churchill Downs and the Singspiel Stakes (G3) at Woodbine. In to challenge him included 5-1 second choice Sir Sahib, 3rd in the Singspiel, and 11-2 third choice Pumpkin Rumble, 3rd in the Dominion Day (G3).

Jockey Steven Bahen sent Tiz a Slam to the lead immediately and he set easy fractions of 24.75, 49.48, 1:14.27, and 1:37.58 while pressed by 6-5 fourth choice Bourbon Resolution and stalked by 7-1 Arthur Kitt and 17-1 Dark Templar. Entering the stretch, Tiz a Slam continued to lead through 10f in 2:01.23. Sir Sahib attemped to rally from 6th early to no avail, as Tiz a Slam drew off late to win going away by 4 1/4 lengths in a new course record of 2:25.14, 0.46 seconds faster than the previous record set by Raintrap in the 1994 Canadian International (G1). It was another 1 1/4 lengths back to late-running Pumpkin Rumble third. Due to a malfunction of the Gmax system the race was originally hand-timed at 2:24.45 (also a record) but was "unofficial" until reviewed by the stewards. On Friday the stewards declared the new clocking of 2:25.14 (verified by an official clocker) and the course record as official. 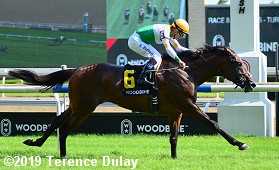 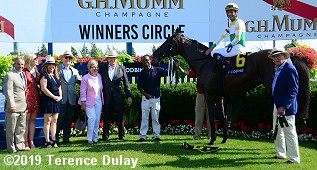 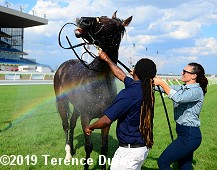 Left: Tiz a Slam in the winner's circle. Winning trainer Roger Attfield said, "He was a big, big horse just taking a long time to actually reach total maturity, which he has now. We've looked after him really well and he's sound and, like I say, when they reach full maturity and they're sound and they're happy, they're only going to give you their best and that's what he's doing for us."

Right: Tiz a Slam gets hosed off after the race. Winning jockey Steven Bahen said, "He ran very well. We got to where we like to be and he doddled along again and when I heard them coming and asked him, he just took off again. Roger's got him really good right now. He's a very happy horse and he's just showing it when he runs." 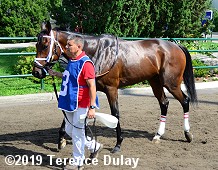 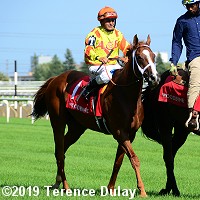 Left: Second place finisher Sir Sahib heads to the paddock before the race. The 5-1 second choice sat 5 1/2 lengths off the pace early under Luis Contreras then passed tiring horses to finish second beaten 4 1/4 lengths. The Kevin Attard trainee improved his record to 2 wins, 2 seconds, and 6 thirds in 13 starts, earning $153,182 for owner-breeder Stronach Stables.

Right: Third place finisher Pumpkin Rumble behind the starting gate before the race. The 11-2 third choice was last early under Eurico Rosa da Silva then rallied to get third beaten 5 1/2 lengths. The Kevin Attard trainee improved his record to 9 wins, 8 seconds, and 10 thirds in 44 starts, earning $575,577 for owners Al and Bill Ulwelling. 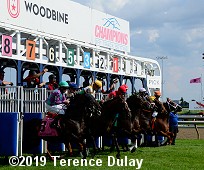 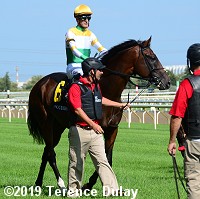 Left: The horses break from the gate for the Nijinsky Stakes. Tiz a Slam is only the second back-to-back winner of the Nijinsky, after Windward Islands in 2010 and 2011. This is Attfield's second win in the race, his first being Are You Kidding Me in 2015.

Right: Eventual winner Tiz a Slam behind the starting gate before the race. Attfield added that Tiz a Slam will go next in the Northern Dancer Turf on the Woodbine Mile undercard (September 14). He said, "It was inward-nervousness. He never showed it much outside but I could pick it up that he was a little bit tense and nervous. He'd get a little bit hot in the mornings. He's been a very interesting horse because when I first got him, I looked at him and said 'I don't think I'll run him as a two-year-old.' And I finished running him four times (as a two-year-old) and he won three of them. So they make liars of you sometimes."


The undercard feature on Sunday was the $100,000 King Corrie Stakes for 3-year-olds sprinting 6 furlongs on the main track. 4-5 favorite Big Drink of Water set the pace of 22.66 and 44.45 while pressed by 4-1 third choice Souper Success. Midway down the stretch Souper Success passed the tiring pacesetter through 5f in 56.88 but 9-5 second choice Olympic Runner, last early under Patrick Husbands, rallied to win going away by 2 1/2 lengths in 1:09.66. It was a neck back to Big Drink of Water third.

Winning jockey Patrick Husbands said, "He was pretty bad again in the gate and I drew the one-hole, but I was lucky we only had three other horses in the gate with me. Down the back, I was getting a perfect trip. These guys were clicking along, and he was just enjoying himself. At two and a half, I said, ‘Boy let's go' and he just decided to run. When I straightened up, he switched to his right lead, and showed me that I had a lot of horse under me, so I just hand-rode him down the lane."