The $200,000 Nijinsky Stakes (G2) at Woodbine Racetrack is one of the prep races for the major turf races later in the season including the $1 million Woodbine Mile (G1) in September and the $1.5 million Canadian International (G1) in October. Conditions were tropical at the Toronto oval, with partly cloudy skies, temperatures in the high 80's, high humidity, and a stiff 20 MPH headwind in the stretch. After 1 scratch a field of 9 older horses went to post in this 1 1/8 mile trip around one turn of the E.P. Taylor Turf Course, with Are You Kidding Me sent off as the 5-2 favorite off his win in the Eclipse Stakes (G2). In to challenge him included 7-2 second choice Za Approval, fourth in the Frank Kilroe Mile (G1) in March and 3rd in the Eclipse last out, and 5-1 Lucky Speed, winless since the 2013 Deutches Derby (G1), shipping in from Germany after finishing 9th in the Grosser Preis vin Baden (G1).

Jockey Omar Moreno sent 8-1 Platinum Glory to the lead exiting the chute and he set fractions of 24.61, 48.34, and 1:11.98 while pressed by 15-2 Excaper and stalked by Are You Kidding Me. Entering the stretch, the pacesetters tired allowing Are You Kidding Me to inherit the lead through 1 mile in 1:34.84. 7-1 Golden Sabre, 4th early, put in a late rally between horses but Are You Kidding Me held him off by 1/2 a length in 1:46.69 over the firm course. It was another 2 lengths back to Za Approval, who nosed out Lucky Speed in a close photo for third. 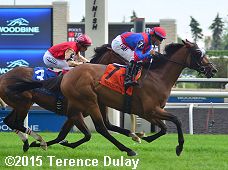 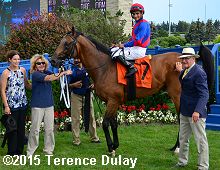 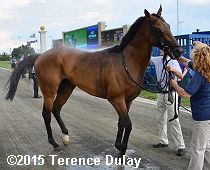 Left: Are You Kidding Me in the winner's circle. Winning trainer Roger Attfield said, "He's a really nice horse. He always has been. He's had some problems with his wind. He's had some fairly significant throat surgeries. I didn't think they could beat him. The only thing I was concerned about was they said it was supposed to be the hottest, most humid day of the summer. We obviously have his breathing problems corrected very well."

Right: Are You Kidding Me gets hosed off after the race. Winning jockey Alan Garcia said, "I was very confident. He'd been training super in the morning, working very great. I only needed at trip. He did spectacular today. He broke good, and I saw two horses go to the lead. I took my time, because I knew he was going to come with a big run, and he did." 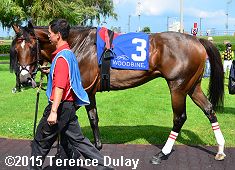 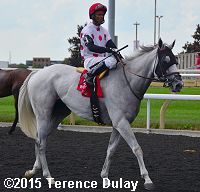 Left: Second place finisher Golden Sabre in the paddock before the race. The 7-1 fourth choice rated in fourth early under jockey Luis Contreras, then rallied well but just missed. The Malcolm Pierce trainee improved his record to 3 wins, 1 second, and 1 third in 10 starts, earning $181,419 for owner-breeder Sam-Son Farm.

Right: Third place finisher Za Approval returns after the race. The 7-2 second choice was unhurried under jockey Patrick Husbands, then rallied to get third beaten 2 1/2 lengths. The Mark Casse trainee improved his record to 8 wins, 8 seconds, and 4 thirds in 30 starts, earning $1,344,204 for owner-breeder Live Oak Plantation.


The undercard feature on Sunday was the $25,000 Duchess Stakes (G3) for 3-year-old fillies sprinting 7 furlongs on the Polytrack. After 1 scratch, just 5 went to post with Pohdi Pohdi sent off as the 4-5 favorite of her win in the Passing Mood after finishing third in the Lady Angela. In to challenge her included 3-1 second choice America Mon Amie, winner of the Northbound Pride Oaks at Canterbury, and 7-2 third choice Roaming, second in her last 2 starts in allowance company.

Jockey Alan Garcia sent 9-1 Midnight Miley to the lead exiting the chute and she set fractions of 22.96 and 45.29 while pressed by Pohdi Pohdi. At the top of the lane, 19-1 longest shot Her Majesty's Flag, 4th early, swept 4 wide to take the lead. Kept to task by Omar Moreno, Her Majesty's Flag held off late-running Roaming by 3/4 length for the win in 1:22.91. It was a neck back to favorite Pohdi Pohdi third. 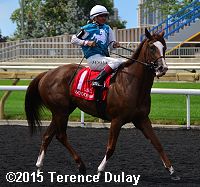 Left: Her Majesty's Flag in the winner's circle. Winning jockey Omar Moreno said, "I thought we were going to be a little further away, but she was so comfortable being up there and when I asked her she just kept going. She felt good today."

Right: Third place finisher and beaten favorite Pohdi Pohdi returns after the race. The 4-5 choice pressed the pace under Eurico Rosa da Silva but gave way in the lane to finish third beaten 1 length. The Bob Tiller trainee improved her record to 4 wins and 2 thirds in 6 starts, earning $192,692 for owner 3 Sons Racing Stable.