The final Breeders' Cup Challenge stakes for 2013 was the $300,000 Nearctic Stakes (G1) at Woodbine, a "Win and You're In" race for the Breeders' Cup Turf Sprint. Light rainshowers all day downgraded the turf course to good, with temperatures in the low 60's. A field of 10 older horses contested this 6 furlong dash over the E.P. Taylor Turf Course, with Play the King (G2) runner-up Excaper sent off as the 3-1 favorite off his 6th place finish in the Woodbine Mile (G1). In to challenge him included 7-2 second choice Longhunter, winner of the Kentucky Downs Turf Dash last out, and 6-1 third choice Riding the River, winner of the King Edward (G2) but fourth in the Woodbine Mile.


Jockey Jim McAleney sent 43-1 longest shot Fatal Bullet to the lead and he set fractions of 22.80 and 46.47 while pressed by Longhunter and Bear Tough Tiger. At the top of the lane Fatal Bullet tired, as Longhunter inherited the lead through 5/8 in 58.29. 9-1 Phil's Dream, who was 6th early, unleashed his rally from the 1/16 pole to win going away by 2 lengths over late-running 8-1 Mr. Online in 1:10.83. It was another 3/4 length back to Longhunter third, while favorite Excaper checked in 9th. 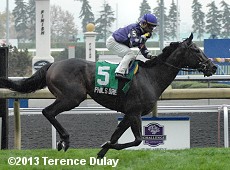 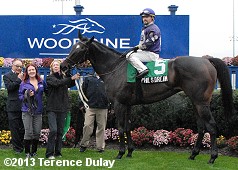 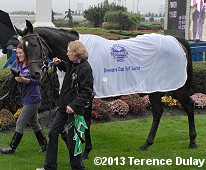 Left: Phil's Dream in the winner's circle. Rick Hayashi, assistant to owner-breeder-trainer Paul Buttigieg, said, "Yes he has (answered every question asked of him). I think he can go any (distance), Paul has run him at 5 1/2 before. When I watched him run before, I felt he would be a better horse on the turf. So we took it from there. Justin gets along well with many of our horses."

Right: Phil's Dream heads back to the barn in his new winner's blanket. Jockey Justin Stein said, "He's a really nice horse, super talented. I did have to sit and wait a little bit, but I had lots of horse to carry me to where I needed to be when it was time to ask him to run. That's the beauty of riding a horse like this. I believe in this horse, was very confident (despite lack of turf experience), I knew he would step up for me." 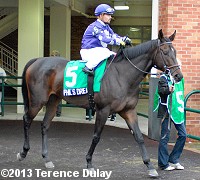 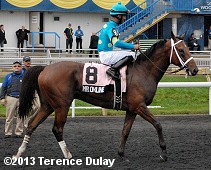 Left: Phil's Dream heads out of the paddock before the race. 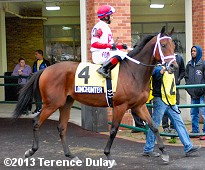 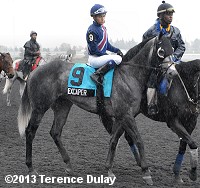 Left: Third place finisher Longhunter heads out of the paddock before the race. The 7-2 second choice pressed the pace in second under jockey Alan Garcia but tired in the final furlong to finish third beaten 2 3/4 lengths. The Mike Maker trainee improved his record to 7 wins, 2 seconds, and 2 thirds in 22 starts, earning $304,03 for owners Ken and Sarah Ramsey.

Right: Ninth place finisher and beaten favorite Excaper in the post parade. The 3-1 choice settled about 3 lengths off the pace down the backstretch under jockey Luis Contreras but failed to respond when asked, finishing 9th beaten 7 lengths. The Ian Black trainee has a record of 3 wins, 6 seconds, and 1 third in 15 starts, earning $501,279 for owner-breeder Richard Kaster and Fred Wieting.