The feature race on the third Saturday of Del Mar's Bing Crosby Season was the $100,000 Native Diver Stakes (G3) for older horses going 1 1/8 miles around 2 turns of the main track. Conditions were excellent with sunny skies and temperatures in the mid 60's at the seaside oval. After Midcourt and Wicked Trick scratched, a field of just 6 went to post, with Eight Rings sent off as the even money favorite off his 4th place finish in the Breeders' Cup Dirt Mile (G1). In to challenge him included 3-1 second choice Azul Coast, 7th in the Awesome Again (G1), and two horses at 13-2, Kiss Today Goodbye, 8th in the San Diego Handicap (G2), and Established off two straight allowance wins. 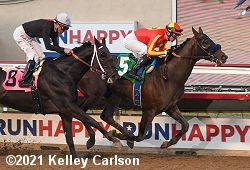 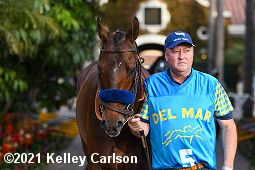 Left: Azul Coast in the winner's circle. Winning trainer Bob Baffert said, "Azul runs his best races down here. He likes this track and he ran really impressive. When I ran him in the Awesome Again he just laid an egg, he was up there close and I was really disappointed, but he was chasing Medina Spirit. I had no idea how it would setup, they were all on their own. I told the jockeys (he had three horses in the race) you guys ride your own races and hopefully we'll run 1-2-3. I'm happy for the connections, the well has been a little dry lately. Main thing is that we got the W..."

Right: Azul Coast heads into the paddock. Winning jockey Flavien Prat said, "We were in a good spot for the whole trip. I could tell the pace was only moderate, so I moved him up closer near the three-eighth (pole). Then when we went we were in good position and he was ready. A good win." 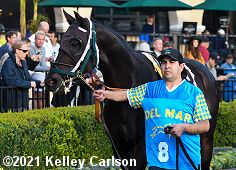 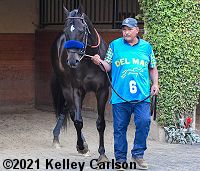