The feature race on the fourth Saturday of Del Mar's Bing Crosby Season was the $100,000 Native Diver Stakes (G3) for older horses going 1 1/8 miles around 2 turns of the main track. Conditions were excellent with sunny skies and temperatures in the mid 60's at the seaside oval. After Stellar Sound scratched, a field of just 4 went to post, with last year's winner Midcourt sent off as the 2-5 favorite off 3rd place finishes in the Pacific Classic (G1) and Awesome Again (G1). In to challenge him were 3-1 second choice Royal Ship, 6th in the City of Hope Mile (G2), 4-1 third choice and last year's runner-up Extra Hope off an allowance win, and 10-1 longest shot Combatant, winner of the Santa Anita Handicap (G1) but 3rd in the Tokyo City Handicap (G3) last out. Due to the short field show wagering was not available. 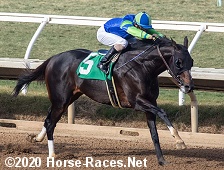 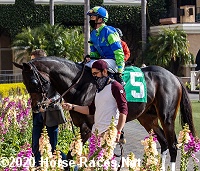 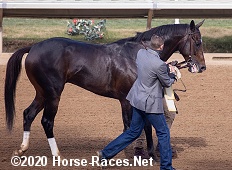 Left: Extra Hope in the paddock. Winning trainer Richard Mandella said, "That's (front running) what we planned with Extra Hope. I told (Juan Hernandez) 'Spin the tires' out of the gate a little bit. He (Extra Hope) kind of doesn't take life real serious, so he wasn't getting out of his training what he needed to before his first race off the layoff. But the one race did it. He's been doing good since then. We'll look at the Big 'Cap (next year) and possibly the San Antonio on opening day at Santa Anita."

Right: Extra Hope returns after the race. Winning jockey Juan Hernandez said, "That was the plan – to go for the lead right away. He helped me a lot the way he broke so good out of there. Then he was running nice an easy for me; he was relaxed. At the quarter pole I asked him and he gave me a good reply." 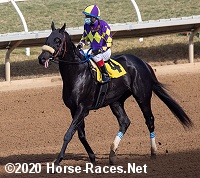 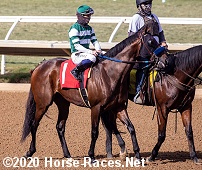