Woodbine Mile weekend kicked off on Saturday with two Breeders' Cup Challenge "Win and You're In" races for the juvenile turf divisions. With no rain in Toronto for over 2 weeks, the turf course was very firm on a sunny but cool afternoon with temperatures in the 60's.

The $300,000 Summer Stakes (G3) featured a field of 10 two-year-olds also at 1 mile on the turf, with a berth in the Breeders' Cup Juvenile Turf up for grabs. Stormy Lord was sent off as the lukewarm 3-1 choice, off an allowance win after finishing 5th in the Vandal Stakes. In to challenge him included 7-2 second choice Korvette Kid, winner of his debut last out, and 9-2 third choice Bridgetown, a maiden winner last out at Saratoga after finishing second in his debut at Churchill Downs.

Stormy Lord and Bridgetown hooked up on the front end down the backstretch and battled through quick fractions of 22.98 and 45.77 with 20-1 Mobil Unit sitting behind them in third, with the field tightly bunched most of the way. Entering the stretch, Stormy Lord continued to lead through 3/4 in 1:10.32, but the pace took its toll on the front runner, as Bridgetown eased on by him at the 3/16 pole, opening up a 2 length lead with a furlong remaining. 7-1 Becky's Kitten, last after 1/2 a mile, came out for room and closed well but was left with too much ground to make up, as Bridgetown cruised under the line 1 1/2 lengths clear in 1:35.04. It was just a nose back to late-running 6-1 Fantastico Roberto third, while favorite Stormy Lord faded to finish fifth. 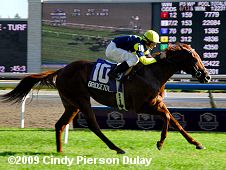 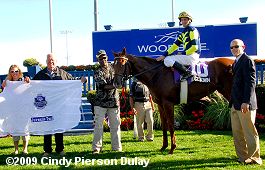 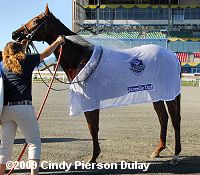 Left: Bridgetown in the winners' circle. His jockey Robert Landry said, "I've been very fortunate to ride a lot of nice horses. This is another great win. (Trainer Ken McPeek) wanted me to try to settle him without getting in a fight with him. He settled nice. When the time counted, he really responded well. I still had a lot of horse. They would have had to do a lot to get by him. He could be a serious horse."

Right: Bridgetown gets hosed off after the race. 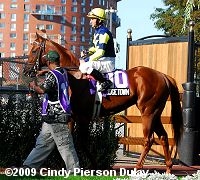 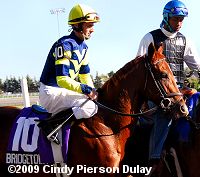 Left: Bridgetown in the paddock before the race.

Right: Bridgetown in the post parade. In his stakes debut, the 9-2 third choice stalked the pacesetter on the outside, took command inside the 3/16 pole and won easily by 1 1/2 lengths. The son of Speightstown out of Tabasco Cat mare Ellesmere improved his record to 2 wins, and 1 second in 3 starts, earning $217,880 for owner-breeder Eugene Melnyk. 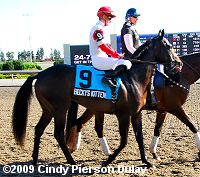 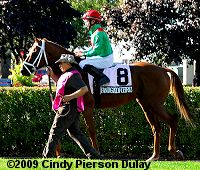 Left: Second place finisher Becky's Kitten in the post parade. The 7-1 shot raced well off the pace early under jockey Julien Leparoux, came out four wide into the stretch and rallied well to get second beaten 1 1/2 lengths. The Wesley Ward-trained son of Kitten's Joy improved his record to 1 win, 1 second, and 1 third in 5 starts, earning $99,135 for owners and breeders Ken and Sarah Ramsey.

Right: Third place finisher Fantastico Roberto in the paddock before the race. The 6-1 shot raced off the pace under new jockey Chris DeCarlo, came five wide into the stretch and rallied well on the far outside, missing second by a nose. The Todd Pletcher-trained son of Refuse to Bend improved his record to 2 wins, 0 seconds, and 1 third in 4 starts, earning $53,594 for owner Team Valor International. 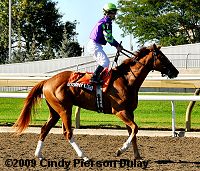 Fifth place finisher and beaten favorite Stormy Lord returns after the race. The 3-1 favorite battled for the lead under regular rider Justin Stein, but could not maintain the hot pace and faded late to finish 5th beaten just 2 lengths. The Ian Black-trained son of Stormy Atlantic has a record of 2 wins in 4 starts, earning $111,390 for owners Hat Trick Stable and Kinghaven Farms.


The $150,000 Natalma Stakes (G3) featured a field of 9 two-year-old fillies going 1 mile on the turf looking for a ticket to the Breeders' Cup Juvenile Fillies Turf. Elusive Galaxy, making her first North American start after shipping in from Ireland, was sent off as the even-money choice exiting a third place finish in the Debutante at Leopardstown. In to challenge her included 7-2 second choice Bay to Bay, winner of a maiden last out, and 9-2 third choice Gitchee Goomie, winner of her debut over the Saratoga turf on September 4.

Elusive Galaxy battled for the lead with Bay to Bay through fractions of 24.08 and 47.61 down the backstretch, with Gitchee Goomie stalking them in third. At the top of the stretch, the pace duel continued through 3/4 in 1:12.49, but Elusive Galaxy began to tire at the 3/16 pole, allowing Bay to Bay to take over the lead in mid-stretch. 10-1 Jungle Tale, seventh early, put in a strong rally on the outside late but Bay to Bay held her off by 3/4 lengths at the line to get the victory in 1:36.06. It was another 1 3/4 lengths back to 9-1 Ernfold third, while favorite Elusive Galaxy was a neck back in fourth. 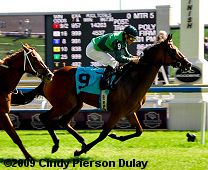 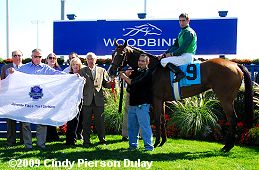 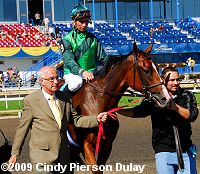 Left: Bay to Bay in the winner's circle. Her trainer Brian Lynch said, "Her first race was on the grass so I was really confident. She ran well her first time. She's a versatile filly. We wanted to see how she'd handle the 'Poly'. She handled that. That was a perfect prep to have her fit enough to get the mile. She always showed that she was a little bit special from the get-go. She's virtually the best two-year-old we have in the barn, right now. She's not eligible (for the Breeders' Cup), so there's still a considerable supplement involved." 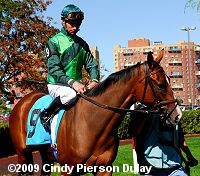 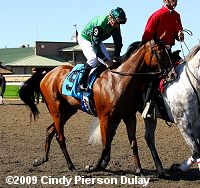 Left: Bay to Bay in the paddock before the race.

Right: Bay to Bay returns after the race. In her stakes debut, the 7-2 second choice stalked the pace down the backstretch under regular rider David Clark, lost touch briefly at the 3/8 pole, but came back in the stretch to prevail by 3/4 lengths. The son of Sligo Bay out of With Approval mare Bala improved her record to 2 wins and 1 third in 3 starts, earning $132,600 for owner Robert Smithen. 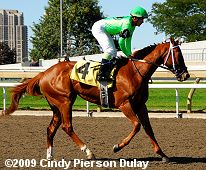 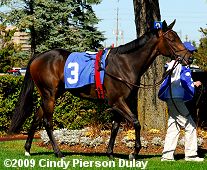 Left: Second place finisher Jungle Tale returns after the race. The 10-1 shot raced back in 7th early under regular rider Luis Contreras, came out five wide into the stretch and closed well to get second beaten just 3/4 length. The Steve Asmussen-trained daughter of Lion Heart improved her record to 1 win, 2 seconds, and 0 thirds in 4 starts, earning $78,400 for owner Bardasian Stables.

Right: Third place finisher Ernfold in the paddock before the race. The 9-1 shot raced in 8th early under regular rider Jim McAleney, then came through on the inside to get third beaten 2 1/2 lengths. The Reade Baker-trained daughter of Stormy Atlantic improved her record to 1 win, 1 second, and 1 third in 3 starts, earning $81,340 for owners Jim and Susan Hill. 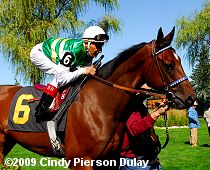 Left: Fourth place finisher and beaten favorite Elusive Galaxy in the paddock before the race. The even-money favorite led for the first 3/4 mile under new jockey Rafael Bejarano, opened up a short lead at the top of the stretch but tired through the final 3/16 mile to finish fourth beaten 2 3/4 lengths. The Gerard Lyons-trained daughter of Elusive City has a record of 1 win and 1 third in 4 starts, earning $53,485 for owners Three Chimneys Racing LLC and Triple B Farms.