The highlight race in New York this weekend was the $400,000 Man O'War Stakes (G1) for older horses going 1 3/8 miles on the inner turf course. Pan American Handicap (G2) winner Imagining was sent off as the 8-5 favorite in the field of 6. In to challenge him included 2-1 second choice Twilight Eclipse, third in the Breeders' Cup Turf (G1) and Pan American, and 7-2 third choice Hardest Core, winner of the Arlington Million (G1) then 8th in the Breeders' Cup Turf. 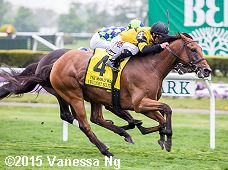 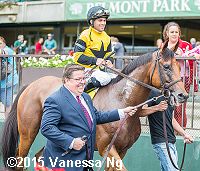 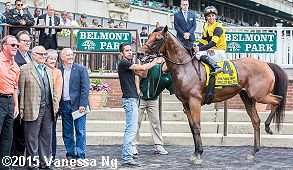 Left: Twilight Eclipse takes his walk down Victory Lane. Winning trainer Tom Albertrani said, "It's been very satisfying for everybody that's involved and for his connections to finally get that Grade 1. I know we've been beaten in a couple of spots but he shows up every time. I think in previous races, the horses were just that good; you know you have horses like Main Sequence. Without a horse like that in the race, this horse looks like a champion himself, but to his credit he did train really well coming into this race. I thought we would have had a little bit of a harder time, especially with the slow fractions, but he was able to get there." 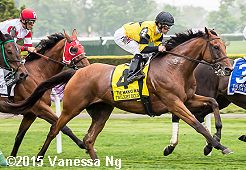 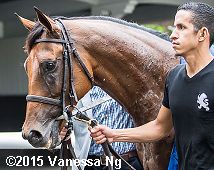 Left: Twilight Eclipse runs in second place first time by. Winning jockey Javier Castellano said, "I thought in my mind, turning for home, I could have put a little pressure on the front-runner because the pace was very slow. But Twilight Eclipse has a short, short run and good kick. I was a little concerned about the ground, because it was a little soft, and usually that type of horse likes it very firm. But he had so much class today. He just galloped along and was right there. Turning for home, if we moved too soon, he would be hanging; if he moved too late, he wouldn't get there. At the right time, the right place, he made the move."

Right: Twilight Eclipse heads back to the barns after the race. 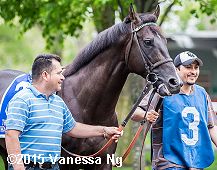 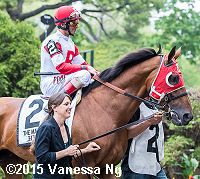 Left: Second place finisher War Dancer in the paddock. The 8-1 shot set the pace under Jose Lezcano but could not hold off the winner. The Bill Mott trainee improved his record to 4 wins, 4 seconds, and 4 thirds in 19 starts, earning $742,662 for owner Diamond M Stable.

Right: Third place finisher Hyper heads out of the paddock. The 11-1 longest shot stalked the pace in third early under John Velazquez but could not improve late, finishing third beaten 3 1/4 lengths. The Chad Brown trainee improved his record to 10 wins, 6 seconds, and 3 thirds in 24 starts, earning $786,775 for owner-breeders Ken and Sarah Ramsey. 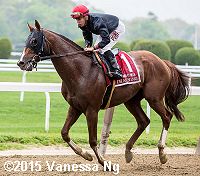 Fifth place finisher and beaten favorite Imagining returns after the race. The 8-5 favorite raced in 5th early under jockey Irad Ortiz Jr. but failed to rally late finishing 5th beaten 6 3/4 lengths. The Shug McGaughey trainee has a record of 9 wins, 5 seconds, and 1 third in 23 starts, earning $1,107,394 for owner-breeder Phipps Stable.


The $150,000 Beaugay Stakes (G3) featured a field of 7 older fillies and mares going 1 1/16 miles on the inner turf course. Discreet Marq was sent off as the 9-5 favorite, unraced since 3rd in the Matriarch (G1) at Del Mar in November. In to challenge her included 5-2 second choice Radiator, an allowance winner at Keeneland last out, and 4-1 third choice J Wonder off a close third in a Keeneland allowance. 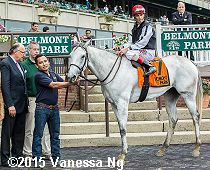 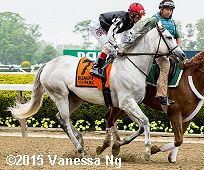 Left: Discreet Marq in the winner's circle with trainer Christophe Clement on the far left. Clement said, "Everything is good. It's nice when they come back. That's what good horses do - they win. Great trip, great ride. She's a good filly. Life is good. I'm delighted because Moyglare stepped up to buy her in the November sale and she came back to win a graded race right away for them, so that's wonderful. This is a good start. Moyglare has been supporting the barn for many years so it's nice to do well for them."

Right: Discreet Marq in the post parade. Winning jockey John Velazquez said, "I had a perfect trip; she broke well and we weren't expecting much speed, so she ended up on the lead. I wanted to make sure to let her run from the gate since there wasn't any speed on paper. Nobody went, so we went a half-mile in :50 and change all by herself. After that, I just let her do what she wanted to do. She had plenty left in the stretch." 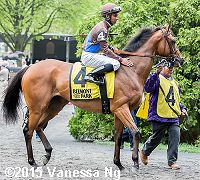 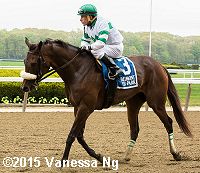 Right: Third place finisher Recepta returns after the race. The 17-1 shot stalked the pace in 3rd under Junior Alvarado, but could not improve finishing third beaten 1 1/4 lengths. The James Toner trainee improved her record to 3 wins, 0 seconds, and 3 thirds in 8 starts, earning $195,200 for owners Phillips Racing Partnership and Pam Gartin.