The last stakes race of Belmont Park's spring-summer meeting is the $600,000 Man o'War Stakes (G1), before New York racing shifts upstate to Saratoga on Friday. A field of 8 older horses went 1 3/8 miles on the inner turf course on Saturday afternoon, before 5,474 fans under skies that started sunny but progressed to cloudy later in the afternoon with temperatures in the mid-80's. Monmouth Stakes (G2) winner Boisterous was sent off as the 3-2 favorite over 8-5 second choice Optimizer, seocnd in the Manhattan Handicap (G1), and 6-1 third choice Speaking of Which, an allowance winner last out after finishing 6th in the Fort Marcy (G3).

Jockey Jose Espinoza sent 88-1 longest shot Folk Singer to an uncontested lead first time by and he set fractions of 23.44, 48.07, and 1:13.06 over the good turf while stalked by Speaking of Which and 8-1 fourth choice Twilight Eclipse. On the far turn, Speaking of Which took over the lead from the tiring pacesetter, getting 1 mile in 1:37.35 before also dropping out of contention. Boisterous, who settled in midpack 5th early, came out 4 wide into the stretch to take the lead at the 3/16 pole through 1 1/4 miles in 2:01.88. In the final furlong, he drew off to win by 2 1/4 lengths over Twilight Eclipse in 2:14.11. It was another 1/2 length back to late-running 22-1 Exclusive Strike third. 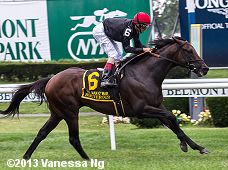 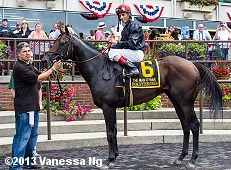 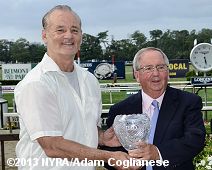 Left: Boisterous in the winner's circle.

Right: Actor Bill Murray presents the Man O'War trophy to winning trainer Shug McGaughey. Murray was at Belmont Park on Saturday to film scenes for the upcoming film St. Vincent de Van Nuys. McGaughey said, "I'm going to smile on this one, because this horse deserves to win a Grade 1. He had been training so good. His three races this year have all been really good. We kind of caught a turf today we liked. I was looking for a little bit of rain. I'm tickled to death, not for me, but for the horse." 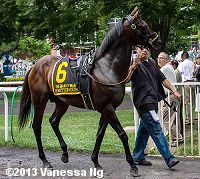 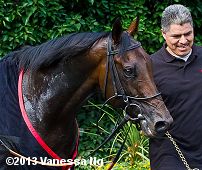 Left: Boisterous in the paddock before the race. Winning jockey John Velazquez said, "I couldn't have asked for a better trip. When I asked him to run, he was there instantly. It was very nice. I was anticipating the pace was going to be a little quicker, but I didn't think three horses would go, so it worked out perfect."

Right: Boisterous heads back to the barns after the race. McGaughey added, "We'll think about the Sword Dancer, the Arlington Million, or the Pacific Classic. When we get up there (to Saratoga), we'll see how he's doing. The Arlington Million I'm a little bit gun shy on because I don't really understand why he ran bad there last year. Somebody said, 'He didn't run all that bad. He was ninth, beaten 5 3/4,' but he ran bad." 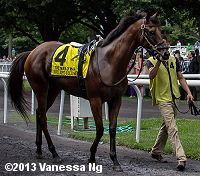 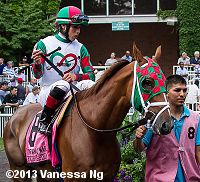 Left: Second place finisher Twilight Eclipse in the paddock. Jockey Javier Castellano said, "At Gulfstream, he loved the hard ground. The weather, you can't control it. The ground was a little soft, but I don't complain much because he gave me a good run. When I asked him, he responded so well in the last part of the race. I give credit to the winner. He was much the best today." 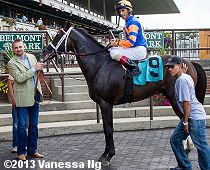 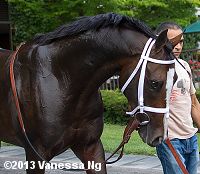 Left: Notacatbutallama in the winner's circle. Jockey John Velazquez said, "I know those two horses are behind me. I wanted to make them commit inside of me and wait there as long as I could, and then when I asked him to run, he was there for me."

Right: Notacatbutallama heads back to the barn after the race. Mike McCarthy, assistant to trainer Todd Pletcher said, "Testament to the horse – he shows up every time, runs hard. You kind of think you're stealing a little bit when you enter in a race like this, and Chad shows up with two very nice horses in here." He will go next in the National Museum of Racing and Hall of Fame Stakes at Saratoga.