The last stakes race of Belmont Park's spring-summer meeting is the $600,000 Man o'War Stakes (G1), before New York racing shifts upstate to Saratoga on Friday. A field of 7 older horses went 1 3/8 miles on the Widener turf course on Saturday afternoon, before 5,948 fans under cloudy skies and temperatures in the mid-80's. European shipper Treasure Beach, winless since the Secretariat Stakes (G1) last year, was sent off as the 9-10 favorite off a 9th place finish in the Audemars Piguet Queen Elizabeth II Cup (G1) at Sha Tin. In to challenge him included 3-1 second choice Point of Entry, winner of the Elkhorn (G2) at Keeneland, and 4-1 third choice Hudson Steele, fourth in the Manhattan (G1) after winning the Dixie (G2).

Jockey Rosie Napravnik sent 17-1 Center Divider to the lead first time past the stands and he set slow fractions of 26.10, 52.05, 1:16.68, and 1:40.02 while stalked by Point of Entry a length behind and just to his outside. Entering the stretch, Point of Entry began to close the gap, taking over the lead at the 1/8 pole through 1 1/4 miles in 2:02.41. Point of Entry drew off for the final furlong, finishing 3 1/2 lengths in front in a time of 2:13.87 over the firm turf. It was another length back to 30-1 Tahoe Lake third, while favorite Treasure Beach finished a disappointing 5th. 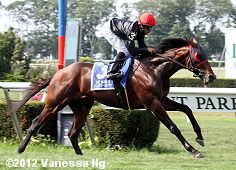 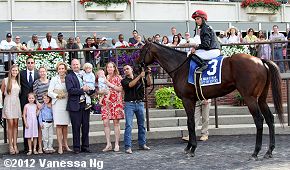 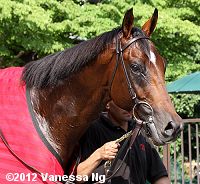 Left: Point of Entry in the winner's circle. Trainer Shug McGaughey said, "I thought Jose rode him great. When Center Divider broke on the lead [Point of Entry] laid right there with him. He said he just relaxed and galloped along. When someone kind of came up there he just sort of eased into the bridle and [Jose] kept him in the clear. I thought it worked out really well."

Right: Point of Entry heads back to the barns after the race. 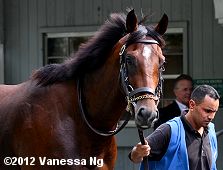 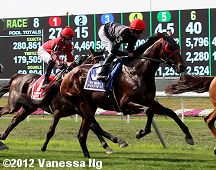 Left: Point of Entry in the paddock before the race. Trainer Shug McGaughey added, "I think he's learning. I told Jose, 'Just be careful he's not too sharp off when you come off the layoff.' I could tell in the paddock he was ready."

Right: Point of Entry shortly after the start. His jockey Jose Lezcano said, "I thought the horse inside of me [Center Divider] would be going, but he wasn't going [fast], so after the break I let my horse settle right there. He wasn't pulling or anything. He did everything right. I think any distance would be good for him. He's a very good horse." 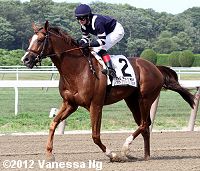 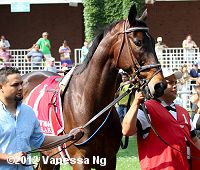 Left: Second place finisher Center Divider returns after the race. Cherie DeVaux, assistant to trainer Chad Brown said, "Rosie rode a beautiful race. Nice and easy, no one came next to her and she was able to stay up there and keep the pace slow. Jose just had more horse and we were second-best."

Right: Third place finisher Tahoe Lake in the paddock before the race. The 30-1 shot stalked the pace in third under new jockey Eddie Castro, but could not improve late finishing third beaten 4 1/2 lengths. The Ken McPeek trainee improved his record to 2 wins, 6 seconds, and 4 thirds in 16 starts, earning $222,919 for owner Alastar Thoroughbred Racing. 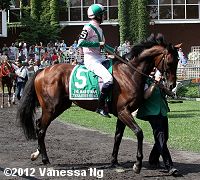 Fifth place finisher and beaten favorite Treasure Beach in the paddock before the race. Jockey Jamie Spencer said, "He was moving fine, he just didn't do anything. The pace was steady, but he was a bit rank early, so I had to get him back."