The feature race at Monmouth Park on Saturday was the $150,000 Monmouth Oaks (G3), a 1 1/16 mile main track contest for 3-year-old fillies. Conditions were excellent at the Oceanport oval with sunny skies and temperatures in the low 80's for the 10,518 fans on hand. A short field of just 5 made final entry, with Breeders' Cup Juvenile Fillies (G1) winner Jaywalk sent off as the 1-5 favorite off her 9 length romp in the Delaware Oaks (G3). In to challenge her included 5-1 second choice Horologist, winner of the Smart N Classy Handicap against New Jersey-breds, and 6-1 third choice Sweet Sami D, second in the Just Jenda Stakes on the Monmouth turf last out.

Jockey Joe Bravo sent Jaywalk to the lead first time by and she set fractions of 23.49, 46.82, and 1:11.12 while pressed by Horologist and stalked by Sweet Sami D. Entering the stretch, jockey Angel Suarez sent Horologist through on the inside to challenge, gaining the front midstretch though 1 mile in 1:37.53. The pair dueled to the line but Horologist outfinished Jaywalk to win by 3/4 length in 1:44.44. It was another 2 1/4 lengths back to Sweet Sami D third. 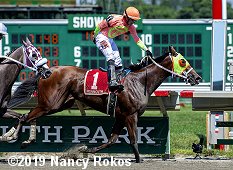 Left: Horologist in the winner's circle. Winning trainer John Mazza said, "I had a lot of confidence in her today but I didn't think she could beat Jaywalk. She's a game Jersey-bred. In this business you've got to keep proving. I think she proved herself today. I'm emotional. It's been a long time between graded stakes wins for me. I'm so happy it happened again with her. I thought she would run a bang-up race. I just didn't know if we could beat a champion like Jaywalk." Owner Cameron Beatty added, "It's happening very fast for me. I'm down to two horses and I only bought my first one in 2015. I would have never named my stable Theres A Chance if I didn't think we had a chance in races like this. 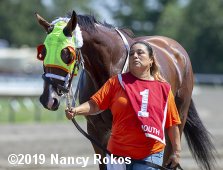 I look at it as, if you're not in it you can't win it. We took a shot thinking there was a little bit of a chance. I guess there was a 5-1 chance because it happened. It's unbelievable."

Right: Horologist walks over before the race. Winning jockey Angel Suarez, celebrating his first graded stakes win said, "I thought I had a good shot. I expected the race to set up just the way it did for me because there was enough speed to make Jaywalk work. Her last race they let her walk on the lead real easy at Delaware. Today I knew it was going to be a different outcome because there was some speed to make her work. If no one else went after her I was going to have to be the one to do it. Once I saw another horse go after her it was perfect. I took a seat and waited for the right moment. Passing the three-eighths I was loaded. I was deciding whether to go outside or inside. I opted to go inside and it worked out good. I was a little worried in the stretch because I wasn't sure if my horse could fight off Jaywalk. But she was just so game." 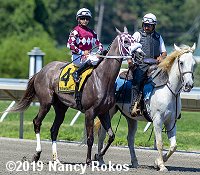 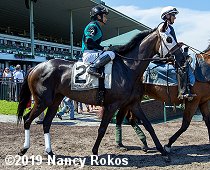 Left: Second place finisher and beaten favorite Jaywalk in the post parade. The 1-5 choice set the pace under Joe Bravo but could not hold off the winner. The John Servis trainee improved her record to 5 wins, 2 seconds, and 1 third in 10 starts, earning $1,653,500 for owners D.J. Stable and Cash is King Stable.