The feature race on Saturday at Monmouth Park was the $156,000 Monmouth Stakes (G3) for older horses going 1 1/8 miles on the turf with the winner earning free entry into the United Nations Stakes (G1) on July 17. Conditions were typical for early June on the Jersey Shore with sunny skies and temperatures in the low 90's for the 4,857 fans in attendance, however heavy rain on Friday downgraded the turf course to good.

Canadian Turf (G3) fourth place finisher Winters Back was sent off as the 3-2 favorite in the field of 8 off an allowance win at Aqueduct. In to challenge him included 2-1 second choice Devamani, fourth in the Fort Marcy (G2) at Belmont, and 3-1 third choice Serve the King, unraced since 2nd in the 2020 Monmouth Stakes (G3) which was delayed to October. 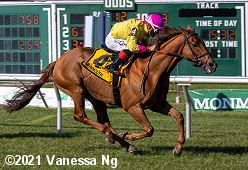 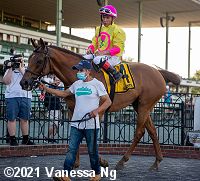 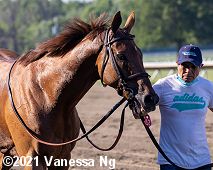 Left: Devamani in the winner's circle. Luis Cabrera, assistant to winning trainer Chad Brown said, "He needed his first race back. (Brown) was thinking about this race all along. This horse is very consistent. But he's kind of a heavy horse who sometimes needs a race. Nik Juarez rode him perfectly. He sat off the speed the way we wanted and saved ground and he had the horse in the right position to win."

Right: Devamani heads back to the barn after the race. 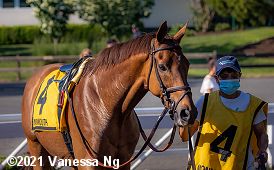 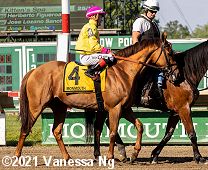 Left: Devamani in the paddock. Winning jockey Nik Juarez said, "You're ultra-confident when you ride Chad Brown's horses. When I ran the turf course this morning I saw how soft it was. It had some give to it. Then I was able to ride on it two races before this. So I knew what to expect, and, with this horse's breeding, he just excelled over it. I had a perfect trip. I could not have gotten to a better set up and the best horse won."

Right: Devamani in the post parade. Juarez added, "I love running the turf course in the mornings (to prepare for the New Jersey Marathon). I would hope it gives me a little advantage. You can find out where you best paths are and with the rain how it was I like to see where the hoses are to drain the water. You can tell the depth of the turf course from there. I will take any edge I can get." 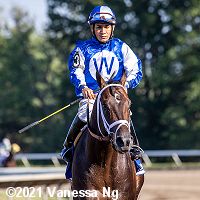 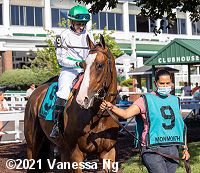 Left: Second place finisher and beaten favorite Winters Back returns after the race. The Todd Pletcher trainee improved his record to 3 wins, 3 seconds, and 0 thirds in 8 starts, earning $198,170 for owner Waterford Stable.

Right: Third place finisher Corelli in the paddock before the race. The Jonathan Thomas trainee improved his record to 4 wins, 3 seconds, and 3 thirds in 16 starts, earning $198,705 for owner-breeder Augustin Stable. 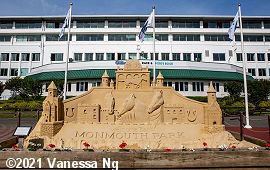 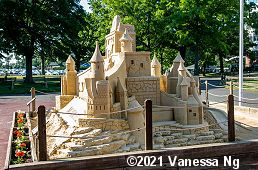 The giant sandcastle behind the grandstand near the paddock. This is an annual tradition at Monmouth Park. 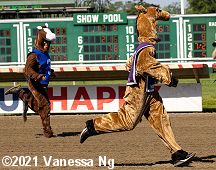 They held a Human Horse Race today sponsored by the NJ Irish Festival Foundation with proceeds going to Bridging the Gap for Veterans, where people dressed in horse suits raced down the homestretch. It takes real guts to run on the track in a horse suit in 90+ degree weather.