Saturday night at Woodbine Mohawk Park featured the third running of the $1 million Mohawk Million, a 1 mile trot for 2-year-olds around 2 turns of the 7/8 mile oval in Campbellville, Ontario. Conditions were typical for the first Saturday of fall, with cloudy skies, intermittent showers, and a race time temperature of 15C (59F) Patterned after the Pegasus World Cup (G1) at Gulfstream Park, owners can buy starting slots for the race and either use the slot for their own horse or re-sell the slot to another owner.

A full field of 10 lined up behind the starting gate, with Peter Haughton Memorial runner-up Oh Well sent off as the 7-10 favorite off his win the New Jersey Classic. In to challenge him included 9-5 second choice Winners Bet, second in the Champlain after winning the William Wellwood, and 14-1 third choice DW's Point Man, winner of his last two races in Ontario Sires Stakes company. 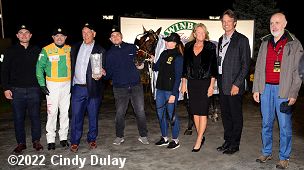 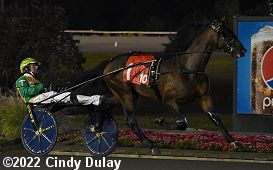 Left: Oh Well in the winner's circle. Winning slot owner Steve Stewart said, "I think that it was more of an opportunity for us to give back to the race and we have benefited tremendously, the guys and us that had the mares and bred the horses. It's a great opportunity. I think it's a wonderful race. It's really important I think to have a race like this for the breeders to have." Stewart's Hunterton Farm bred the first two Mohawk Million winners but this is their first win as a slot owner.

Right: Oh Well warms up before the race. Winning driver Tim Tetrick said, "I just had to be careful on the rail, you just don't want to get pinned, and then not get out. I don't think the size of the track even bothers him at all. He's a big strong colt, he's great gaited, and mainly just keep him focused because he'll look at butterflies if you let him. He's got a big engine, he never gets tired, and he's a really nice colt." 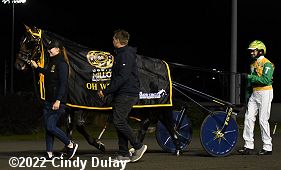 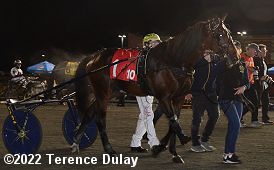 Right: Oh Well returns after the race. Winning trainer Marcus Melander said, "Right from the start, he was a beautiful colt. He cost a lot of money. If you buy a high-price yearling, it doesn't mean they're going to be good. He's covered a lot of ground and he's a great horse." 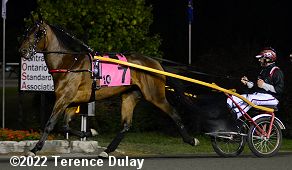 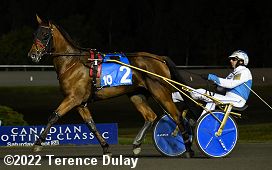 Left: Second place finisher Silly Me Hanover warms up earlier in the evening. The Luc Blais trainee improved her record to 2 wins, 1 second, and 2 thirds in 6 starts, earning $289,631 for owner Determination of Montreal, QC.

Right: Third place finisher Proud To Be Lindy warms up before the race. The John Bax trainee improved her record to 0 wins, 3 seconds, and 2 thirds in 7 starts, earning $155,694 for owners Bax Stable of Campbellville and Glengate Famrms of Erin, ON. 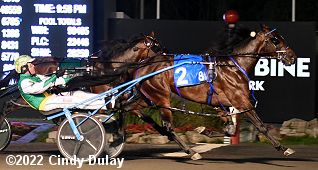 The $900,000 Metro Pace featured a full field of ten 2-year-old pacers. Save America was sent off as the 3-5 favorite off wins in the Nassagaweya Stakes and Champlain Stakes before winning his elimination heat. In to challenge him included 4-1 second choice Stockade Seelster, third in his elimination after winning the Dream Maker and Ontario Sires Stakes, and 8-1 third choice Ace of Aces, second in the Champlain and then third behind Save America in his elimination.

Driver Dexter Dunn sent 12-1 Tickertape Hanover to the lead first time by through a quarter in 27 4/5 before favorite Save America took over on the backstretch through a half in 55 1/5 and 3/4 in 1:23. Save America had a 1 1/2 length lead at the top of the stretch but Stockade Seelster and driver Jody Jamieson rallied to win by 3/4 length in 1:50 1/5. It was another 1 3/4 length back to Ace of Aces third. 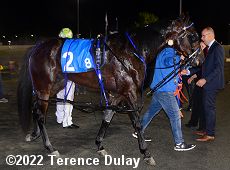 Left: Stockade Seelster in the winner's circle. Winning driver Jody Jamieson, celebrating his third Metro win, said, "Yannick was looking to let me go and I knew that when I moved him. He's a tough horse to drive right now. He's green and he wants to go fast all the time. There was a gap there and I took it, it's as simple as that. At the head of the lane, I thought I did have him. I was kind of shocked a bit that I had him, but I thought I had him, and he just dug in and paced right to the wire."

Right: Stockade Seelster heads back to the barn. Winning trainer Dr. Ian Moore, celebrating his first Metro win said, "This is a pretty nice colt, and I should've made the change with the bridle long before this. He was obviously a lot more manageable tonight, and we got a full performance from him tonight. And Jody did a heck of a job, no doubt about that. I figured that our luck may have changed when he drew the two-hole. I was expecting the 10-hole, so that was a surprise. The week before in the elimination, I was not happy here on a Saturday night. The horse and I were having a battle all week long and he just wasn't in top shape for me. This week, I was very pleased. I warmed him up, he was two fingers tonight. I could've gone another lap, but I was pleased." 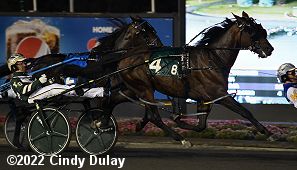 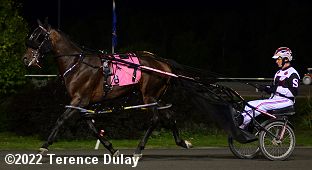 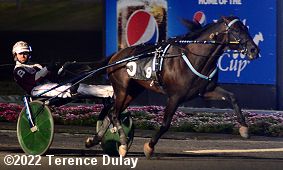 The $615,000 Canadian Trotting Classic featured an overflow field of eleven 3-year-old trotters. Kentucky Championship Series Final winner Branded by Lindy was sent off as the 11-10 favorite over 4-1 second choice Pretender, winner of the New Jersey Classic, and 11-2 third choice Twin B Archie, winner of the Simcoe Stakes.

Driver Andrew McCarthy sent Pretender to the lead first time by and he set fractions of 27 1/5, 56, and 1:23 3/5 while pressed by 8-1 Slay and stalked by 12-1 Keg Stand. At the half, favorite Branded by Lindy, 5th early, broke stride and dropped back to ninth. In the stretch Pretender continued to lead but driver Joe Bongiorno sent Slay through a narrow opening along the pylons, briefly breaking stride at the 1/8 pole, but continuing on to win by a length over Pretender in 1:52 1/5. It was another 1/4 length back to late-running 37-1 Fast As The Wind third. After a lengthy inquiry into Slay's breaking of stride, the judges did not change the order of the first 8, however favorite Branded by Lindy who finished ninth was disqualified and placed 10th for an extended break in stride. 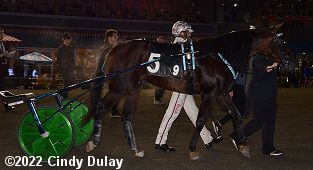 Left: Slay in the winner's circle. Winning driver Joe Bongiorno said, "We just got a little bit jammed up in there, he caught a boot. It was surprising to me as it probably was to everyone else, it was very uncharacteristic for him. Like a great horse does, he got back really quick. I figured going for this kind of money I just had to drive him through the wire and let the judges make their decision. I was worried but after speaking with the judges I was pretty confident. Me and Tony have had a lot of success here, that's for sure. This is a great and I'm just really happy for the connections."

Right: Slay returns after the race. Winning trainer Tony Alagna said, "He got out of there good, he's a real tactical horse. He's pretty handy. I was as shocked as anyone (when he broke), it made sense he caught a boot the way his head dropped. We just had to wait and see that hopefully he didn't interfere with anybody. He showed determination, this horse really likes to win. It's kind of fun because we brought his brother up here last year, Ahundreddollarbill, and he won the Canadian Trotting Classic so to have to full brothers win it back to back years, both owned by the Crawfords, it's special." 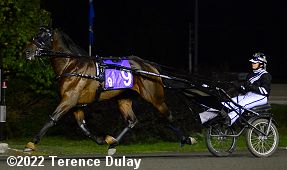 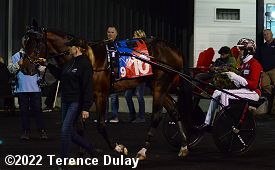 Right: Third place finisher Fast As The Wind comes out for the post parade. Trainer Tony Alagna said, "Fast As The Wind raced phenomenal tonight, he came out of the 10 hole to be third." Alagna added that Slay and Fast As The Wind will both go next in the Kentucky Futurity at the Red Mile in Lexington. 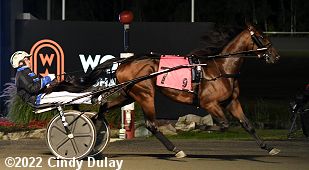 Beaten favorite Branded by Lindy crosses the finish line in 9th place but was disqualified and placed 10th by the judges for an extended break in stride. The Domenico Cecere trainee has a record of 10 wins, 2 seconds, and 4 thirds in 21 starts, earning $544,769 for owner-breeder Lindy Farms of Enfield, CT. 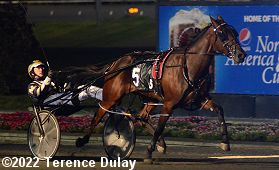 Kicking off the Saturday night stakes quintet, a field of 9 two-year-old pacing fillies contested the $525,500 She's A Great Lady Stakes. Sylvia Hanover was sent off as the 1-2 favorite off wins in the Eternal Camnation and Champlain Stakes, over 2-1 Charleston, winner of the Kindergarten at Meadowlands, and 11-1 Proud Mary off third place finishes in the Pennsylvania Sires Stakes. Charleston was quickest away through an opening quarter of 27 2/5 before driver Bob McClure moved favorite Sylvia Hanover out wide to the front through a half in 56 3/5 and 3/4 in 1:25 2/5. Charleston kept pace with Sylvia Hanover the rest of the way as Sylvia Hanover held her off to win by 3/4 length in 1:51 4/5. It was another 3 lengths back to late-running 62-1 Treacherous Penny third. 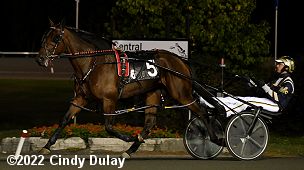 Left: Sylvia Hanover in the winners circle. Winning trainer Shawn Steacy said, "Every start she shows more and more, her first start off a qualifier when she jumped up to a 1:51 mile, that was impressive." Steacy said Sylvia Hanover would train up to the Breeders Crown which will be run at Woodbine Mohawk Park in 5 week's time.

Right: Sylvia Hanover in the post parade. Winning driver Bob McClure said, "She was stretching herself out, I think she could have cleared a little easier. We kept going really fast, we were pacing hard down the lane, they were pacing with her, there's a lot of really fast fillies. She wasn't letting them get too close. It's a fun race just to be a part of, to win it is even better." 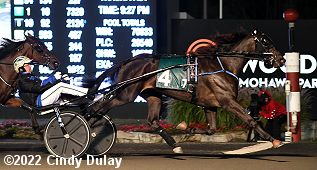 The $350,000 Elegantimage Stakes featured a overflow field of 11 older pacing fillies and mares. New Jersey Classic third place finisher Raised by Lindy was sent off as the even-money favorite over 9-5 second choice Warrawee Xenia, winner of the Simcoe Stakes, and 13-2 third choice Mon Cheval, fourth in the Delmonica Stakes at Pocono and Pennsylvania Sires Stakes at the Meadows. Driver James MacDonald sent 17-1 Adare Castle to the lead first time by through a quarter of 27 1/5 before Yannick Gingras moved Raised by Lindy on by down the backstretch through a half in 56 2/5 and 3/4 in 1:24 3/5. Kept to task by Gingras, Raised by Lindy held the lead the rest of the way to prevail by 1 1/2 length over Adare Castle in 1:52 1/5. It was a head back to Mon Cheval third. 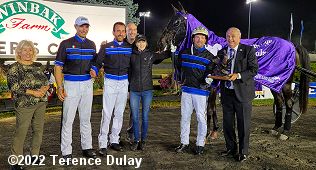 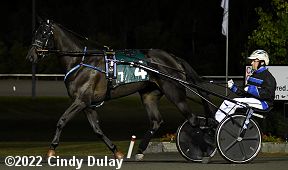 Left: Raised by Lindy in the winner's circle. Winning driver Yannick Gingras said, "She was (well in hand), she was fighting them off. I wasn't sure where Bobby (McClure) was (driving Warrawee Xenia, who broke stride and finished last) so I was trying to keep her going. There are a lot of big races at the end of the year, so we're looking forward to a nice fall."