The newest addition to the Woodbine Mohawk Park stakes schedule is the $1.32 million Mohawk Million, a 1 mile trot for 2-year-olds around 2 turns of the 7/8 mile oval in Campbellville, Ontario. Conditions were excellent on Saturday night, with partly cloudy skies and a race time temperature of 21 C (70 F) with the track rated fast. Patterned after the Pegasus World Cup (G1) at Gulfstream Park, owners can buy starting slots for the race and either use the slot for their own horse or re-sell the slot to another owner. A full field of 10 faced the starter, 9 on the gate and 10 post Venerate starting in the pocket behind the 1 post.

Donna Soprano was sent off as the 4-5 favorite off wins in the Pure Ivory, Champlain, and Peaceful Way Stakes, all at Mohawk. In to challenge her included 5-2 second choice Venerate, winner of the Kentucky Sires Stakes at Red Mile after finishing 3rd in the Peter Haughton at Meadowlands, and 9-1 third choice On a Streak, winner of the William Wellwood last out.

Driver Jody Jamieson sent 20-1 Altar to the lead first time by through an opening quarter of 27 seconds before 9-1 On a Streak took over down the back through a half in 56 1/5. 13-1 Insta Glam moved up to challenge on the far turn through 3/4 in 1:24, before driver Bob McClure, 6th early behind favorite Donna Soprano, sent her out wide to sweep to the lead at the 3/16 pole. However, Venerate, wide around both turns withd river Andrew McCarthy, rallied down the lane to pull off the mild upset by 3/4 length in 1:53 2/5. It was a long 8 lengths back to On a Streak third. 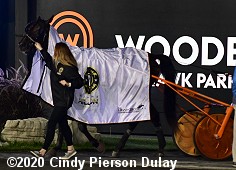 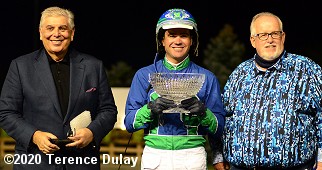 Left: Venerate exits the winner's circle. Brad Grant, who purchased a slot in the race in partnership with Marvin Katz for $110,000 and then negotiated a deal with owners Pinske Stables and Andy Miller Stable said, "It makes me look pretty smart I guess. We really believed in this race when we bought our slot. What Woodbine has done is something new and I think it's great, it had a buzz to it all year long. Its unfortunate our colt [Maverick] didn't get here but [we] talked to Julie Miller and one quick conversation we had a deal done. Just wonderful people to work with. I'm happy it worked out for them and I'm really happy it worked out for us"

Right: Driver Andrew McCarthy and slot owners Brad Grant (right) and Marvin Katz (left) pose with the trophy for the Mohawk Million. McCarthy said, "I was hoping I'd get out of there a little closer, but after scoring him down I knew I couldn't make him accelerate too fast, so I just wanted to get out of there upright. He's a very strong horse, I've seen that, I didn't really care how far back I got, just figured I'd have to get through that first turn and then worry about where I'm going from there. The speed was pretty tough early, so it worked out where I could end up getting a pretty good trip, but when I looked up at the eighth-pole I was a long away back." 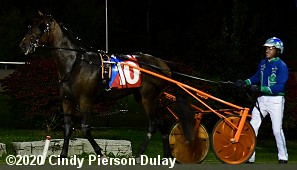 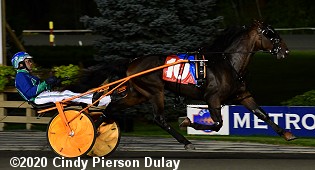 Left: Venerate returns after the race. Winning driver Andrew McCarthy added, "I'm so thankful for Andy and Julie and Pinske Stable. And to Brad (Grant) for deciding to use me on this horse, I'm so thankful. It feels amazing just to be involved in a race like this. It's important to hold races like this, it draws a lot of attention and hopefully it hangs around for next year."

Right: Venerate warms up before the race. 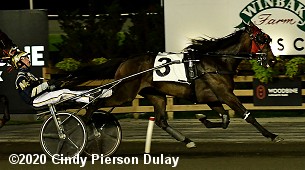 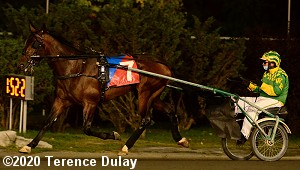 Right: Third place finisher On a Streak warms up earlier in the evening. 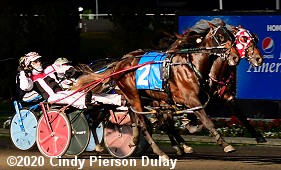 The $720,000 Metro Pace featured a full field of 10 two-year-old pacers. Abuckabett Hanover was sent off as the 1-5 favorite off wins in the Nassagaweya and Champlain Stakes. In to challenge him included two colts at identical 7-1 odds, Bayfield Beach, 3rd in the Pennsylvania Sires Stakes Championship at Pocono, and Lawless Shadow, winner of the other Nassagaweya division as well asn an Ontario Sires Stakes last out. Driver Bob McClure sent Lawless Shadow to the lead first time by through an opening quarter of 26 seconds before Bayfield Beach took over down the back through a half in 55 1/5 and 3/4 in 1:22 4/5, chased by favorite Abuckabett Hanover to his outside. Turning for home, Bayfield Beach continue to lead but 36-1 longshot Exploit, wide throughout with driver Doug McNair, rallied to win by a head over Bayfield Beach in 1:50 4/5. It was another length back to Lawless Shadow third, while Abuckabett Hanover tired to finish 6th beaten 4 1/2 lengths. 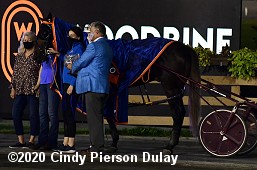 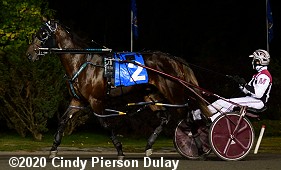 Left: Exploit heads to the winner's circle. Donna Lee, assistant to trainer Tony Alagna (her son) said, "I was so shocked that Abuckabett didn't fire, I know something's got to be bothering him; something's wrong. But when I heard Exploit on the outside I'm going ‘Oh my God, we're going to win anyway!' I'm just shocked. It's been a night of strange happenings."

Right: Exploit returns after the race. Winning driver Doug McNair said, "[Exploit] was feeling real good. We were following the best horse in race I thought—I mean we got away like sixth and seventh, so I figured if we got out on the flow we get a pretty decent trip. He swelled right up in the last turn and kind of surprised me a little bit when he blew by them all. But he raced great. We might put a little bit of whiskey in this trophy later." 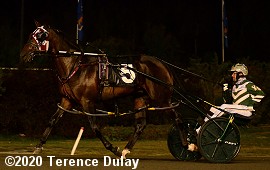 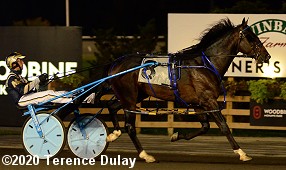 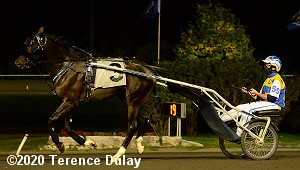 Kicking off the stakes quartet, a field of 9 two-year-old pacing fillies contested the $455,000 She's A Great Lady Stakes. Eternal Camnation and Champlain Stakes winner Caviart Audrey was sent off as the 4-5 favorite over 5-2 Scarlett Hanover, winner of her Champlain division, and 3-1 Notorious Pink, winner of the WHenuwishuponastar before finishing 2nd in the Kentucky Sires Stakes. Scarlett Hanover was quickest away through an opening quarter of 26 seconds before Notorious Pink gained the front down the back through a half in 53 4/5 and 3/4 in 1:21 3/5. Notorious Pink continued to lead the rest of the way but came out on favorite Caviart Audrey and driver Yannick Gingras midstretch causing a chain reaction. Scarlett Hanover finished a head in front of Caviart Audrew in 1:52 2/5, and it was another head back to 64-1 Paulas Bet Hanover third. After a lengthy inquiry, the judges disqualified Scarlett Hanover and driver Andrey McCarthy for interference and placed her last, moving favorite Caviart Audrey to the win. 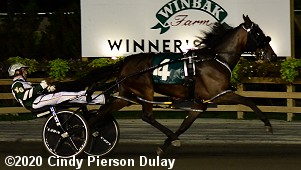 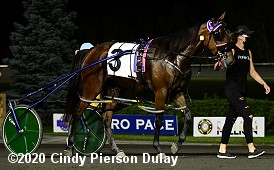 Left: Caviart Audrey warms up before the race. Now a five-time winner from six starts, Caviart Audrey has banked $354,237 for owner Caviart Farms. Nancy Takter trains the filly by Somebeachsomewhere who paid $3.70 to win. 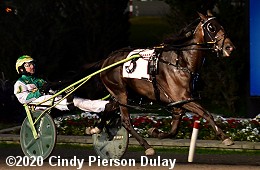 The $215,000 Milton Stakes featured a full field of 10 older pacing fillies and mares. Elimination winner Kissin in the Sand was sent off as the 3-2 favorite over 3-1 Warrabee Ubeaut, winner of the Roses are Red Stakes at Mohawk but 5th in the Send It In at Scioto Downs, and 5-1 Caviart Ally, 3rd in her elimiation after finishing 6th in the Dorothy Haughton at Meadowlands. Driver Louis Philippe Roy sent 9-1 Lit de Rose to the lead first time by through an opening quarter of 26 1/5 before driver Jody Jamieson sent favorite Kissin in the Sand down the back through a half in 54 1/5 and 3/4 in 1:22.1. Kept to task by Jamieson, Kissin in the Sand powered away to win by 5 lengths over Lit de Rose in 1:49. It was another 1/4 length back to Caviart Ally third. 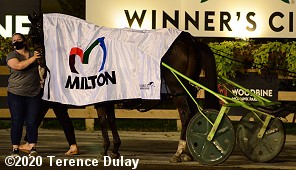 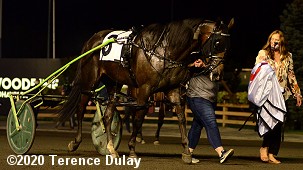 Left: Kissin in the Sand in the winner's circle. Winning owner Marvin Katz said, "(Trainer) Nancy Takter doesn't need me to sing her praises but this mare is entirely 100 per cent due to Nancy Takter. From the time she was a baby, developing her as a yearling, she's loved her. Nancy and I have had 50 discussions about stopping with her and its Nancy who's insisted [we race], because we want to breed of course. Nancy loves this filly and deserves absolutely all of the credit in the world, and the performance tonight speaks volumes of Nancy Takter."

Right: Kissin in the Sand heads back to the barn after the race. Winning driver Jody Jamieson said, "She clearly needed that race last week. She was so good coming off the rail in :25.3 on the end. I was just ultra confident in her, and we got to pick our post obviously with the win. So I just figured that we get away a little bit close and see how it panned out, and it worked out perfectly to get back to the lead. She just did the rest; Nancy [Takter] and her team had her awesome tonight, she was unbeatable, really. She just jogged :26.4 on the end like breaking sticks—really just an amazing effort."