It was a full moon on Saturday night at Mohawk Racetrack, with no less than three bizarre incidents marring one of the track's biggest days of racing. There were three stakes finals on the card, including the Maple Leaf Trot, which was billed as a "match race" between two Breeders Crown champions, Mare Trot winner Peaceful Way taking on the best of the boys, Open Trot winner Mr. Muscleman. Peaceful Way and Mr.Muscleman buttons were handed out at the entrances for fans to show their choices. After the Maple Leaf were two other finals for the best pacing juveniles of the east, the She's A Great Lady for 2-year-old fillies and the Metro Pace for 2-year-old colts and geldings.

The third race, an elimination event for next week's Canadian Trotting Classic, saw one of the lengthiest judges inquiries in recent memory. There was some interference before the start, and it was decided that last place finisher Last Flight Out did not receive a fair start and thus all bets on him were refunded. The judges also ruled that Northern Ensign, who finished second but was placed first, did not receive a fair start and had originally announced that his bets would also be refunded, ironically allowing Strong Yankee, who interfered with Northern Ensign and had been disqualified from first to second, to move back up to first place. A loud chorus of boos rained down from the packed stands when Northern Ensign's number was taken down. After more silence, the announcer explained that Northern Ensign cannot be taken down because, even though he was interfered with, he obviously did not suffer and the rules of racing did not allow refunds to be given on a winner. After 30 minutes of deliberation, the order of finish was allowed to stand, with Strong Yankee moved to second and the refund on the 7 Last Flight Out.

Although it was not the richest race on the card, the Maple Leaf Trot was the highlight of the night. An overflow field of eleven lined up behind the starter in this $918,000 event, but the eyes of the crowd were on just two of them, 2-1 Peaceful Way and even-money favorite Mr. Muscleman. When the starting gate hit the top of the stretch, the "recall" light turned on. The track announcer called it to the audience, the tote board also lit up, and some of the drivers begun to pull up their horses. Then inexplicably, the light was turned back off, the gate kept moving on to the start, the drivers quickly got their horses back into stride, and the race was on.

66-1 outsider Abbey Road C and 21-1 shot Elegant Man battled up front around the clubhouse turn and down the backstretch, with Mr. Muscleman stalking them taking a wide trip out of the 9 hole, and Peaceful Way also close up. Midway down the backstretch, driver Trevor Ritchie took Peaceful Way out wide to challenge for the lead, but she uncharacteristically broke stride, dropping her to the back of the pack where she would finish. Mr. Muscleman was just hitting his best stride at this point, and rounding the far turn he easily made the lead. Through the stretch he did just as he did in the Breeders Crown, extending his lead to 5 1/2 lengths over 17-1 second place finisher Muscles Marinara, in a time of 1:52.1.

While the connections of Mr. Muscleman celebrated in the winner's circle, the judges called in each of the eleven drivers to be interviewed regarding the bizarre start (winning driver Ron Pierce went in last). After this lengthy process, the judges ruled that four of the drivers were affected by the recall light error, and so, bets on any of them were refunded but the result was allowed to stand. About the only people happy with this decision were the many bettors who chose Peaceful Way, as she was bet down to 2-1 second choice and was the sentimental favorite for many in the crowd. 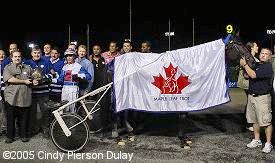 Mr. Muscleman and his many connections in the winner's circle. Winning driver Ron Pierce said, "He's been so good for so long. I had no idea what I was going to do. I was just going to wait and see what everyone else was doing and make up my mind. As it turned out, we just floated out of there, let everybody settle in. Turning for home, I just waved the whip at him a little bit and he did the rest." 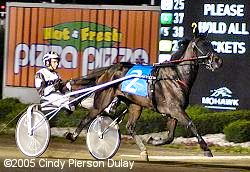 Peaceful Way crosses the finish line last after breaking stride in the race. Her driver Trevor Ritchie said, "She got ultra-aggressive. When I moved her, she tried to trot right out of her skin and made a break. She's trotted out of her skin before, but it's usually later in the mile when she's more tired and not as keyed up." 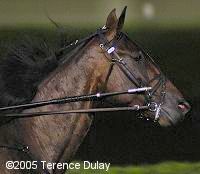 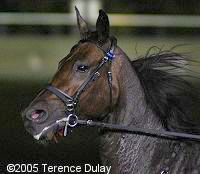 Close-ups of Mr. Muscleman (left) and Peaceful Way (right) earlier in the evening while they were warming up without so much equipment so you can actually see their faces. 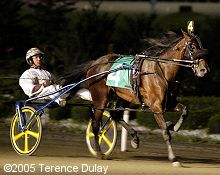 The She's A Great Lady Final

Thankfully the superstition of "bad luck happens in threes" held true, as the two juvenile stakes races went off without incident. In the $688,200 She'sagreatlady Stakes, 3-5 favorite Little Miss K lived up to expectation, stalking the pace around the clubhouse turn, taking over the lead down the backstretch, and then stretching her lead through the lane to win by 3 lengths over 3-1 second choice Style in a time of 1:52.2. Trained by Erv Miller and driven by Brian Sears, Little Miss K sent her bankroll past the $468,000 mark as she notched her fifth win from her seventh start.

Closing out the festivities was the $1 million Metro Pace, the richest race in North America for 2-year-old pacers. 2-1 second choice Jeremes Jet sat back in fourth early, grabbed a slim lead at the top of the stretch, and then held off the even-money favorite Palone Ranger in a duel through the final furlong to win by just 1/4 length in 1:50.4.

Winning driver Paul MacDonell said, "He's a quality animal. When he steps on the track, you can just see he's got presence. He looks like he's got the parts when the race starts too. He certainly did prove himself tonight, especially considering the fact that it's only his third lifetime start. He's got a great career ahead of him. I was worried. That colt (Palone Ranger) just never went away."