The $250,000 Mother Goose Stakes (G1) is the middle leg of the New York Triple Tiara, conducted at 1 1/16 miles around one turn of the Belmont Park main track. Just six 3-year-old fillies went to post on Saturday afternoon under sunny skies before the 6,827 fans in attendance, with Fantasy Stakes (G2) winner Joyful Victory sent off as the 4-5 favorite off her 4th place effort in the Kentucky Oaks (G1). In to challenge her included 7-2 second choice Buster's Ready, second in the Black-Eyed Susan (G2) at Pimlico last out, and 15-4 third choice Salty Strike, winner of the Dogwood (G3).

Salty Strike battled for the early lead with Buster's Ready exiting the chute and down the backstretch through fractions of 23.55 and 47.03, while being stalked by 26-1 longest shot R Gypsy Gold in third. Salty Strike continued to lead through 3/4 in 1:11.52 but soon tired, allowing Buster's Ready to inherit a 1 1/2 length lead in mid-stretch. Joyful Victory, 4th early, put in a late rally but Buster's Ready was long gone, drawing off through the final furlong to win by 4 1/4 lengths in 1:42.44 over the fast track. It was just a neck back to R Gypsy Gold third. 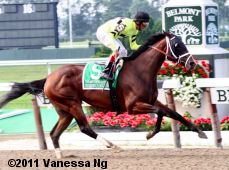 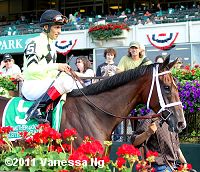 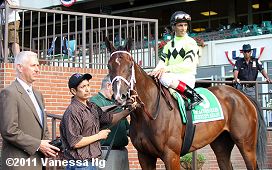 Right: Buster's Ready in the winner's circle with trainer Todd Pletcher on the far left. Pletcher said, "She's been steadily improving all winter and spring and she's a filly we always felt wanted more distance. Her last race was sort of a breakthrough race for her and she's kind of finding her rhythm now. She's putting it all together and it's helped being able to steadily get some route races. We'll see how she comes out of it; I think the next logical step is the Coaching Club American Oaks." 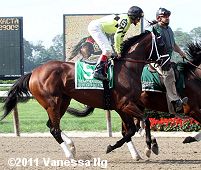 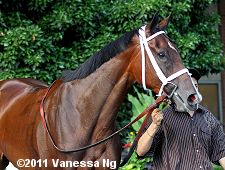 Left: Buster's Ready in the post parade. Her jockey John Velazquez said, "We like nice surprises. She ran huge. I didn't think I was going to be on the lead, that's for sure. We were planning that I was going to be second or third. But she was doing it so comfortably. She was running the last part!"

Right: Buster's Ready heads back to the barns after the race. 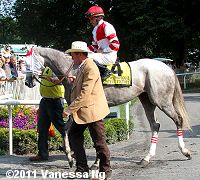 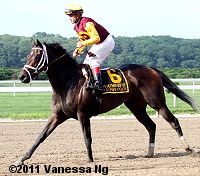 Left: Second place finisher and beaten favorite Joyful Victory in the paddock. Her trainer Larry Jones said, "My horse ran well. The other horse showed she could run the last time." Jockey Ramon Dominguez added, "I had a good trip. Turning for home I had to angle out to get a clear run, but just didn't have enough horse."

The undercard feature on Saturday was the $150,000 New York Stakes (G2) for older fillies and mares going 1 1/4 miles on the inner turf course in this early prep for the Breeders' Cup Filly and Mare Turf Sheepshead Bay Stakes (G2) winner Hibaayeb was the 7-5 favorite in the field of 6 over 8-5 second choice Zagora, third in the Jenny Wiley (G2) at Keeneland last out, and 7-2 third choice Giants Play, runner-up in the Sheepshead Bay.

Jockey Rajiv Maragh sent Giants Play to the lead first time past the stands and she was allowed an uncontested lead of 1 1/2 lengths through slow fractions of 26.34, 52.99, and 1:17.65 over the firm going, with 37-1 longest shot Freedom Rings and favorite Hibaayeb stalking her in second and third. Entering the stretch, Giants Play continued to lead through 1 mile in 1:41.43. Zagora, 5th early and saving ground on the hedge around both turns, came through and rallied late, but Giants Play held her off in the final strides to win by a head in 2:04.76. It was another 2 3/4 lengths back to Hibaayeb third. 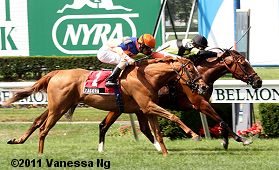 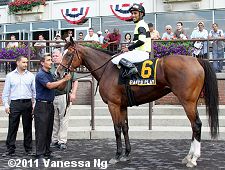 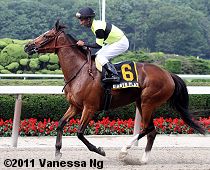 Left: Giants Play in the winner's circle. Her trainer Christophe Clement said, "Rajiv gave her a great ride. She is an improving filly. Very well bred, so to win a graded stakes was a goal this year. It is a big deal. It's an amazing pedigree, and she's obviously a very valuable mare. She was rank last time and was fighting too much. This time we ran her with a net, put her on the lead, and she was a lot more relaxed. She ran a very game race. The net sits on their nostrils and for some, it relaxes them."

Right: Giants Play returns after the race. Her jockey Rajiv Maragh said, "Mr. Clement and his team did a great job to try and get her to settle. She was a lot more relaxed today and it helped me do my job better. I felt like we were going slow, but my main thing was to try to get her to settle. It was the key to getting the best out of her, so that's what I did. I wasn't worried about the fractions at all. The race was lacking speed, so I just inherited the lead." 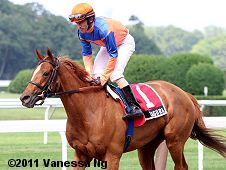 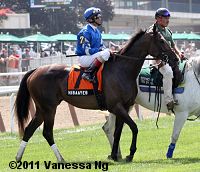 Left: Second place finisher Zagora returns after the race. The 8-5 second choice sat 3 1/2 lengths off the lead early under Ramon Dominguez, then closed well through the lane but just missed. The Chad Brown trainee improved her record to 4 wins, 4 seconds, and 2 thirds in 12 starts, earning $376,522 for owner Martin Schwartz.