The $683,000 Metro Pace at Mohawk Racetrack is the richest race in North America for 2-year-old pacers. It was a warm, humid Saturday night in Campbellville, with temperatures in the mid 70's, overcast skies, and minimal wind, and intermittent showers. A full field of 10 lined up behind the starter in this standard 1 mile trip around 2 turns of the 7 furlong stonedust oval, with Western Vintage sent off as the 3-4 favorite, winner of 4 out of 5 starts including his elimination heat. In to challenge him included 3-1 second choice Luck Be Withyou, second in his elimination heat last out, and 7-2 third choice Tellitlikeitis, third in his elimination after winning the Pennsylvania Sires Stakes at The Meadows.

Driver Yannick Gingras sent Western Vintage to a clear early lead and he set fractions of 26.1, 54.3, and 1:22.2 over the fast track while stalked by Tellitlikeitis about 2 lengths behind. Entering the stretch, Western Vintage pulled away from the field, opening up a 2 3/4 length advantage with a furlong to go. However, 10-1 Boomboom Ballykeel, third early, despite suffering interference in the lane, rallied through traffic and ran by the tiring favorite late to win by 2 1/4 lengths in a time of 1:50.4. It was another 2 1/4 lengths back to 45-1 longshot Some Major Beach third. 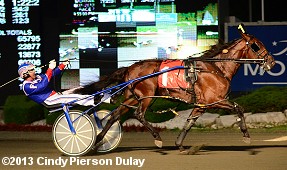 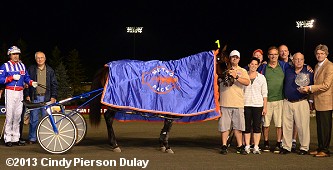 Left: Boomboom Ballykeel in the winner's circle. Driver Sylvain Filion said, "He was full of himself. I knew if he could get some room, he'd be real close. When we drew the rail, I thought we had a good shot. He raced so good last week and just missed. You've got to give credit to Richard Moreau. He's done a great job with this horse. He's a real nice baby. He's got real good gate speed and he's real handy." Owner-breeder Cam McKnight added, 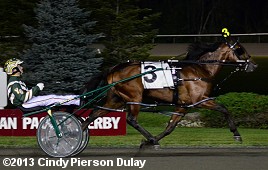 "We had a full brother to him and he was a very nice horse, too. So we kind of thought he (Boomboom Ballykeel) would be nice, but I have to be honest, until he showed me in a qualifying race, I didn't know he was that good."

Right: Second place finisher and beaten favorite Western Vintage warms up before the race. Driver Yannick Gingras said, "My horse raced good, but he was a little hot tonight. Leaving the gate he was a little wound up and wasn't easy to rate on the front. I didn't want to grab into him too much and him make a break. He being too hot definitely cost us the race in my opinion." 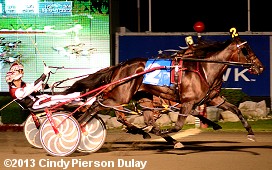 The distaff counterpart to the Metro Pace is the $451,000 She's A Great Lady Stakes for 2-year-old pacing fillies. Precocious Beauty was sent off as the 6-5 favorite in the field of 10 over 8-5 Beach Gal and 6-1 Gallie Bythe Beach. 16-1 Sudoku led first time by through an opening quarter of 26.2 before Gallie Bythebeach took over on the backstretch through a half in 54 seconds and 3/4 in 1:22.2. Gallie Bythe Beach held a 1 1/2 length lead at the 1/8 pole but Precocious Beauty, fourth early and wide throughout, came on late to win by 1/2 a length in a stakes record equalling 1:50.2. It was another 2 3/4 lengths back to late-running Beach Gal third. 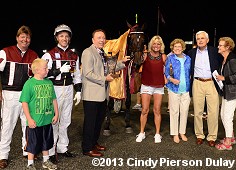 Precocious Beauty in the winner's circle. Driver Doug McNair said, "When they're going for $450,000 any horse can win it. (Beach Gal) raced big last week (eliminations). There was a big half in that race last week so they were bound to go a big mile. My filly was two seconds slower last week, but I still had a lot of faith in her and she bounced back for us tonight." 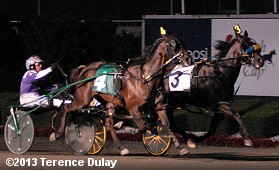 Closing out the stakes action on Metro Pace night is the $651,000 Canadian Pacing Derby, featuring some of the best older pacers going the standard 1 mile distance. Gerrity Stakes winner Bolt the Duer was sent off as the 8-5 choice in the field of 10 off his elimination win, over 2-1 second choice A Rocknroll Dance, also an elimination winner after winning an Invitational at Pocono, and 4-1 third choice Clear Vision, second in his elimination after finishing second in the Gerrity at Saratoga.

7-1 Pet Rock was quickest away through an opening quarter in 26.2 before A Rocknroll Dance took over down the backstretch getting fractions of 53.4 and 1:20.4, while stalked by Pet Rock and Clear Vision. Clear Vision closed the gap on the favorite and gained a head advantage at the 1/8 pole, setting up a duel to the line. The pair hit the finish post together, but A Rocknroll Dance prevailed by a nose photo in a track record equalling 1:47.2. It was another 1 1/2 lengths back to 15-1 Foiled Again third. 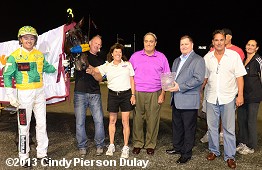 A Rocknroll Dance in the winner's circle. Driver Tim Tetrick said, "It was very, very tight. He had me by a good head and my horse fought back and his horse never gave up. It was a nice race all the way to the wire. The (trainer Jim) Mulinix crew has him on his toes and he feels good and he's brave and he's showing how good a horse he is in his last couple of starts" 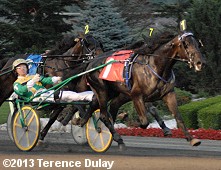 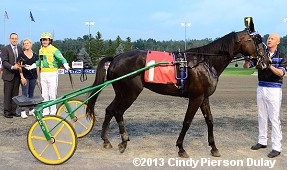 Winning driver Tim Tetrick said, "My horse from the rail didn't get away as good as I liked, but it worked out. They went enough speed that a couple of them raced a little bit and then slowed things down. My horse got to ease there first up and when I called on him down the lane he fought horses really well. He's playing a little catch up, but he's got a lot of athletic ability, which really helps him. He finds ways to get the job done and he's got talent." 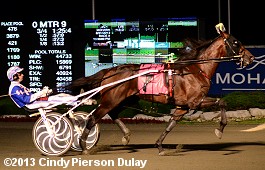 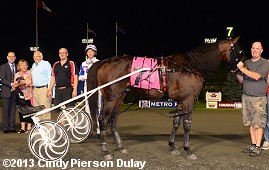 In the second division, 8-5 Deadliest Catch battled for the lead with 9-1 Toocool Forschool through an opening quarter of 27.3 and half in 57 seconds. Into the stretch, 6-5 favorite Your So Vain, 8th early, came out wide for room to take the lead and then drew off to a 4 3/4 length romp over Deadliest Catch in 1:53.4. It was another 1/4 length back to 40-1 longest shot Loco Caballo third.

Co-owner Paul Van Camp said, "Right from the get-go he was staked to everything because he has heart and you can see how he can close. Tim Tetrick drove him in Lexington and he was far from right and won in 1:55 so he's always shown the two things. Soundness is coming so we had high hopes."