The $1 million Metro Pace at Mohawk Racetrack is one of the richest races in North America for 2-year-old pacers. Racing conditions were ideal Saturday night in Campbellville, Ontario, with no wind and temperatures in the upper 60's A full field of 10 lined up behind the starter, with undefeated Sportswriter sent off as the even-money favorite, exiting a neck victory in his elimination heat last week after winning a division of the Nassagaweya Stakes. In to challenge him included 5-2 second choice Malicious, who was also undefeated having won his elimination heat as well as his division of the Nassagaweya, and 9-2 third choice Woodstock, winner of the third elimination heat and making his stakes final debut.

Driver Paul MacDonnell sent Malicious to the front first time past the stands through an initial quarter mile in 26 seconds, with 9-1 Delmarvalous stalking him to his outside. Down the backstretch, Delmarvalous took over the lead through a half in 53 seconds and 3/4 in 1:21, with Malicious and Woodstock tracking him into the lane. Entering the stretch, driver Mark MacDonald and Sportswriter, who raced in midpack fifth early out wide around both turns, found room between horses to get to the front, passing the tiring pacesetters. 9-1 Rock N Roll Heaven put in a strong rally from sixth on the inside but was left with too much ground to make up, as Sportswriter cruised under the line 2 lengths in front in 1:49 2/5. It was another 1 3/4 lengths back to 65-1 longshot Rock Me Please in third. The running time set a new world record for 2-year-old pacing males, eclipsing the previous mark set by Somebeachsomewhere in the 2007 Metro Pace. 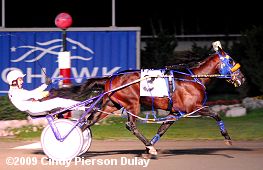 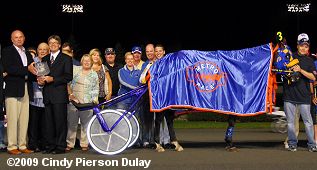 Sportswriter in the winner's circle. His trainer Casie Coleman said, "I knew we had the right horse. He did everything right. He couldn't have had a better week. Since Day One, this horse had been absolutely amazing. It's a dream come true. I've been calling him Seabiscuit since the day I bought him (for $50,000). Mark worked out a perfect trip. I didn't even have this colt marked in my (Harrisburg) Yearling Sale book. There was a big speed duel up front. He got away fifth, then was second over cover. It couldn't have went anymore perfect. It was absolutely amazing." 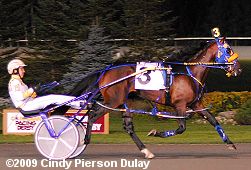 Sportswriter warms up before the race. His driver Mark MacDonald said, "It's unbelievable. I've been knocking on the door in million dollar races. I've been second and third. But tonight I thought I had a really good shot. I was really confident. Casie always does her homework and had the horse ready. They've been telling me all year long what a good horse he was. I loved him from the get-go. He's just a special horse. I was a little concerned going into the first turn. I had to back up and give the seven horse a hole. It just worked out great. Huge fractions. I got to follow a great colt in Woodstock. (Around the far turn) he felt pretty good, he felt like a winner. But I didn't want to get too overconfident." 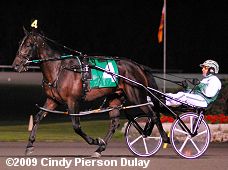 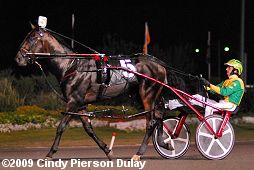 Left: Second place finisher Rock N Roll Heaven in the post parade. The 9-1 shot raced in 6th early on the outside with regular driver Daniel Dube, put in a strong rally through the stretch but was no match for the winner. The Bruce Saunders trained son of Rocknroll Hanover improved his record to 2 wins, 3 seconds, and 1 third in 6 starts, earning $334,286 for owner Frank Bellino of Bronxville, NY.

Right: Third place finisher Rock Me Please in the post parade. The 65-1 longshot raced in seventh early with regular driver Steve Condren, then came out widest of all into the stretch to get third beaten 3 3/4 lengths The Bob McIntosh trained son of Rocknroll Hanover improved his record to 1 win,0 seconds, and 2 thirds in 4 starts, earning $127,707 for owner Lothlorien Stable of Cheltenham, Ontario. 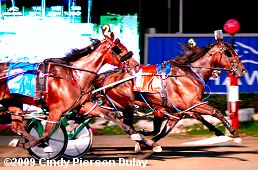 The filly counterpart of the Metro Pace is the $810,300 She's A Great Lady Stakes for 2-year-old pacing fillies. Put On A Show was sent off as the 7-10 favorite in the field of 10 over 3-1 second choice Fancy Filly and 9-2 Rock N Soul. 17-1 Panagler led the field first time past the stands and around the clubhouse turn through a quarter in 27 1/5 before Rock N Soul took over on the backstretch. Rock N Soul set fractions of 55 1/5 and 1:23 2/5 before tiring at the top of the stretch. Favorite Put On A Show, who was 6th and very wide on the far turn, rolled on by the tiring pacesetters to win by 1/4 length over late-running 21-1 Higher and Higher in 1:52. It was another 1/4 length back to Fancy Filly third. 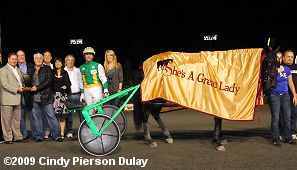 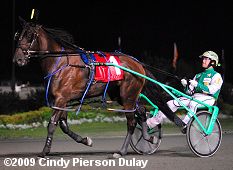 Left: Put On A Show in the winner's circle.

Right: Put On A Show in the post parade. Her driver Jody Jamieson said, "I wanted to be somewhere in the middle of the pack, where I could catch cover. Going around the last turn I thought to myself, 'this is the trip, let's see if she's up to it', and she was. She was a little steppy on the back-side of the track – it's lightning fast and that means it's a little bit harder than usual. I think it was taking its toll on her, so she was a little steppy and I had to be careful with her. When I tipped her 3-wide I wanted to follow cover as long as I could. I knew she could give me one big kick and it was just enough, actually, to get to the wire." 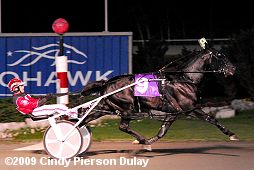 Closing out the stakes action on Metro Pace night is the $685,000 Canadian Pacing Derby, featuring some of the best older pacers going the standard 1 mile distance. Elimination winner Won the West, winner of the Breeders' Crown Open Pace two starts back, was sent off as the 5-4 favorite in the field of 10 over 7-2 second choice and Ontario Masters winner Bigtime Ball, and 9-2 third choice and defending champion Mister Big, sixth in the Breeders Crown and then seventh in the elimination.

Driver George Brennan sent 7-1 Shark Gesture to the front soon after the start, and he set early fractions of 26 seconds, 53 4/5, and 1:20 3/5 while as many as 2 3/4 lengths in front of Won The West and 14-1 Mr. Saratoga who stalked him second and third respectively. Entering the stretch, Won the West and Mr. Saratoga both tired allowing Shark Gesture to open up a 2 1/2 length advantage at the 1/8 pole. 8-1 Bettor Sweet and Mister Big closed on the far outside late but were no match for Shark Gesture who cruised past the winning post 2 lengths in front in 1:48 1/5. Just a head separated second place finisher Bettor Sweet and third place finisher Mister Big, while favorite Won the West faded to finish 8th beaten 8 1/2 lengths. 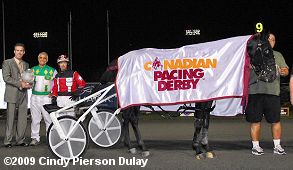 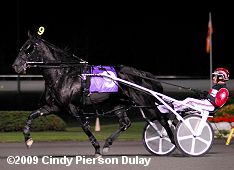 Right: Shark Gesture in the post parade. Driver George Brennan said, "He's been doing it his whole career. Every year, except the year he stood stud, of course. At two, three, four and now. He's tough as nails. To get him on the front like that, it takes a real good one to pass him. That's what he likes."