The traditional feature at Belmont Park on Memorial Day is the $500,000 Metropolitan Handicap (G1), a 1 mile trip around 1 turn for older horses. A field of 11 contested the 118th renewal of the "Met Mile", before 9,144 fans enjoying clear skies and temperatures in the high 80's. Tizway was the lukewarm 3-1 favorite off two straight 3rd place finishes in the Gulfstream Park Handicap (G2) and the Charles Town Classic (G3). In to challenge him included 7-2 second choice Haynesfield, fourth in the Westchester (G3) after finishing a close second in the Cigar Mile (G1), and 5-1 third choice Soaring Empire, second in his last two starts, the Gulfstream Park Sprint Championship (G2) and the Gulfstream Park Handicap (G2).

Jockey Javier Santiago sent 7-1 Tackleberry to the lead and he set quick fractions of 23.17 and 45.57 over the fast track while being pressed to his outside by Tizway early. On the turn, Tizway moved up to challenge, taking over the lead at the 1/4 pole through 3/4 in 1:08.66. Tackleberry tired and faded from contention as Tizway opened up a 4 length lead in mid-stretch. 36-1 Rodman, ninth early, put in a strong rally but was left with too much ground to make up as Tizway cruised past the post 2 3/4 lengths in front in 1:32.90. It was another 5 1/2 lengths back to 8-1 Caixa Eletronica third.

The Metropolitan Handicap is the first Breeders' Cup Challenge "Win and You're In" race in North America this year. Tizway is guaranteed a berth in the Breeders' Cup Dirt Mile (G1). He will have his pre-entry and entry fees waived, and will receive a $10,000 travel allowance. Winning owner William Clifton Jr. said, "He's been running with the big boys. Today, he was the big boy. One of the reasons I bought him was because his dam is related to Will's Way, who had the biggest heart of any horse I've ever raced, and I've raced more than 300 horses. This horse has a lot of heart. He's been a very consistent horse for us; maybe now it's our turn." 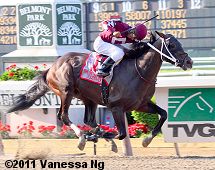 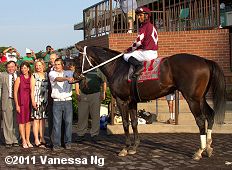 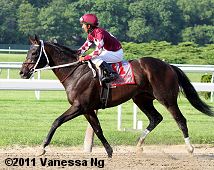 Left: Tizway in the winner's circle with trainer James Bond on the far left. Bond said, "He tries every time. He couldn't stand up on that stuff at Charles Town, and still ran a game third and just missed second. Like I say, I'm just fortunate enough to have him in my barn. (Dr. Alan Nixon) from Cornell helped put him back. He had a little broken, fractured wingbone. We nerved that foot, which was the right thing to do, basically, at the time to get back for the fall. He hasn't missed a beat since then. I'll probably look at the Whitney. It's our home base. We'll back up from the Breeders' Cup and basically start looking backwards and try to find the right spots for him. I know this horse will run 1 1/4. It depends on what kind the horses are at the end of the year. You and I all know what can happen."

Right: Tizway returns after the race. 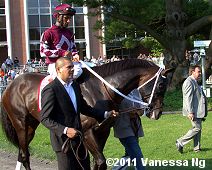 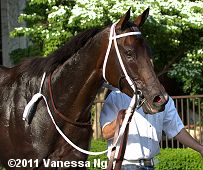 Left: Tizway in the post parade. Winning jockey Rajiv Maragh said, "It was a great trip. I had a good post and my horse broke well. He was always running for me - I really didn't have to do much, just get him going at the right time and he held off pretty fine. It was pretty straightforward - I broke out of the gate, I just ran a straight line, dropped in a little when I went to the turn, gave my horse the cue and he was always into the bridle. He was ready. He was really ready. My horse is more of a steady kind of horse, and he keeps picking it up gradually, so the race flow suited him pretty well. We went off decent in the first 1/4 and then we just gradually started picking up, and that's running into my horse's style. He'll kill you with a high cruising speed, that's what his weapon is."

Right: Tizway returns to the barn after the Met Mile. 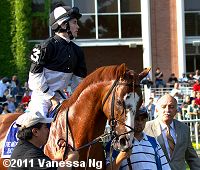 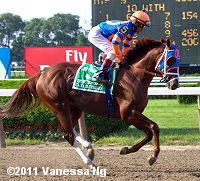 Left: Second place finisher Rodman in the paddock before the race with trainer Mike Hushion. Hushion said, "He looked so good going under the wire. My instructions were to get him in his best stride. I'm thrilled he ran a pretty brilliant race to be second." Jockey Channing Hill added, "This is a really nice horse. I actually ended up breaking this horse's maiden, it must have been 3 years ago now, and he was one of the most impressive first-time starters I've ever ridden in my life. Mike's always been really high on this horse and just for that reason. He belongs with these horses and the further the better - if it was 1 1/8 today, we'd have run the whole field over."

Right: Third place finisher Caixa Eletronica in the post parade. The 8-1 sixth choice settled in 4th 2 lengths off the pace early under jockey Cornelio Velasquez, moved up to get 2nd in the stretch but faded late to finish 3rd beaten 8 1/4 lengths. The Todd Pletcher trainee improved his record to 13 wins, 7 seconds, and 8 thirds in 42 starts, earning $371,705 for owner Repole Stable. 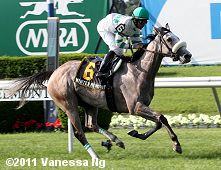 Immediately before the Met Mile, a field of 6 three-year-old fillies went 1 1/16 miles on the inner turf in the $150,000 Sands Point Stakes (G2). Breeders' Cup Juvenile Fillies Turf (G2) runner-up Winter Memories was sent off as the 3-5 favorite off her win in the Appalachian (G3) at Keeneland. In to challenge her included 7-2 second choice Naples Bay, making her stakes debut after an allowance win last out, and 4-1 Mystical Star, second in the Herecomesthebride (G3) before winning an allowance.

36-1 longest shot Arch Support battled for the lead with Mystical Star down the backstretch through very slow fractions of 26.11, 51.41, and 1:13.34, while being stalked by Winter Memories third. Entering the stretch, Winter Memories passed the tiring pacesetters, opening up a 3 length lead at the 1/8 pole through 1 mile in 1:36.71. 19-1 Celestial Kitten closed from last but Winter Memories finished 3 lengths in front in 1:42.61 over the firm course. It was another 3/4 length back to 10-1 Parting Words third. 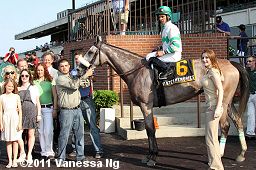 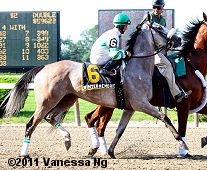 Right: Winter Memories in the post parade. Winning jockey Jose Lezcano said, "She just galloped over there. I had to go very close to the pace, but when I asked her, she gave me the same kick she always give me and she picked it up very quick. She usually sits back and makes a run, but today there was no pace in the race, so I had to do what I had to do This is the kind of filly you can do whatever you want with, you can keep her close or you can take her back. Today, with six horses and no pace, I had to put her in the race." 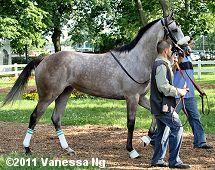 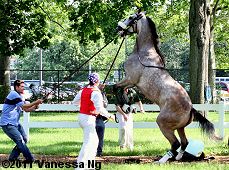 Left: Winter Memories in the paddock before the race.

Right: Winter Memories was not very happy to be saddled. Winning trainer James Toner said, "The outcome was good. Ordinarily, you don't want to be that close, but when they go in :51 you can't be 10 lengths back. Now that she's getting racier, she wants to be more forward. As soon as they started slowing it down, she took him up there. We discussed the lack of pace beforehand, but I don't tell Jose what to do. He knows the filly really well and gets along with her. Our main goal is the Queen Elizabeth II; we'll figure out the best way to get her there and look at the Lake George and Lake Placid in Saratoga." 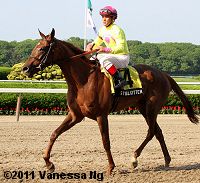 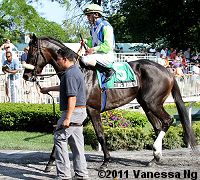 Left: Second place finisher Celestial Kitten returns after the race. The 19-1 shot was eased back at the start by jockey Javier Castellano, raced last for 7/8 mile, then rallied to get 2nd beaten 3 lengths. The Chad Brown trainee improved her record to 1 win, 3 seconds, and 2 thirds in 6 starts, earning $81,331 for owners Michael Dubb and Bethlehem Stables LLC.

Right: Third place finisher Parting Words in the paddock before the race. The 10-1 fourth choice stalked the pace in fourth early under jockey Ramon Dominguez, came out 4 wide into the lane and finished 3rd beaten 3 3/4 lengths. The Barclay Tagg trainee improved her record to 2 wins, 0 seconds, and 2 thirds in 6 starts, earning $79,450 for owner Lael Stable.