The Grade 1 Metropolitan Handicap, also known as the Met Mile, is the traditional Memorial Day feature in New York and 15,066 fans came out to Belmont Park to witness reigning Horse of the Year Ghostzapper make his first start of the 2005 season. A field of six entered this $750,000 event for older horses, a 1-mile trip around one turn of the main track. As expected, Ghostzapper was sent off as the 3-5 favorite, with Forest Danger the 2-1 second choice.

After a short delay when the favorite refused to load, the field got underway and Edgar Prado hustled 11-1 shot Love of Money to the front, engaging second choice Forest Danger into a speed duel down the long backstretch. After a quarter in 22.47 and a half in 44.48, Love of Money was done and dropped out of contention, tiring through the lane to finish last. Ghostzapper, under regular rider Javier Castellano, stalked the pace saving ground along the inside. Rounding the wide turn for home, the champion unleashed his run, blasting through the pacesetters and was 2 1/2 lengths clear of Forest Danger at the quarter pole, having traveled the 6 furlongs in a blistering 1:08.46. Ghostzapper drew 8 lengths clear of late-running 35-1 longest shot Silver Wagon at the furlong pole, and was ridden out through the last furlong, finishing 6 1/4 lengths clear of Silver Wagon at the line, completing the mile over the fast track in 1:33.29. It was 5 more lengths back from Silver Wagon to 17-1 shot Sir Shackleton in third. Forest Danger tired entering the lane and finished fifth. The running time ties for the fourth fastest in stakes history. 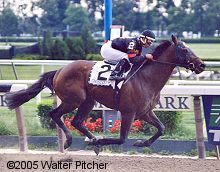 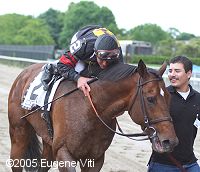 Javier Castellano and Ghostzapper head for the winner's circle after the race. Castellano said, "At the start, they [assistant starters] wanted me to jump off. I didn't want to do that; I thought I could handle the situation. In the race, he broke good and I could have gone to the lead, but I wanted to prove today that he could come from behind, too. That's exactly what I did. I'm not worried about the layoff. I ride with a lot of confidence on the horse. I wanted to show the people that he's a special horse. He can do anything. I came through between horses on the turn. The rest, he did so easy. I didn't do anything with him at the top of the stretch because I wanted to take it easy on him. I didn't want to kill him for one race." 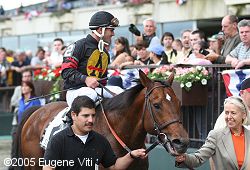 Elfriede Stronach leads Ghostzapper down Victory Lane. Winning trainer Bobby Frankel was quick to defend Ghostzapper's owner, saying "You guys in the press really don't give him, Mr. (Frank) Stronach, a lot of credit because he is a $40-$50 million horse and could generate $10-$15-million in stallion fees. He brought him back to the races, where he could make at best, what five or six million dollars? I know people rip him for this and that, but give him a little credit for this one. He took a bigger gamble than anyone else will ever take. You won't see this happen for a long time. If it was someone else, they would have retired him. He wanted to bring him back so the fans could watch him another year." The plan is for an all-New York campaign, with the Suburban at Belmont, the Whitney at Saratoga, and then the Woodward and Breeders' Cup Classic back at Belmont to finish off the season and possibly his career. 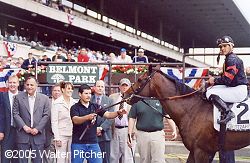 Ghostzapper in the winner's circle with trainer Bobby Frankel second from the left. Frankel, winning his third Met Mile, said, "I'm very emotional right now. He's a great horse, let's just put it that way. He broke sharp, but I didn't think he would show that much speed, to be honest with you. He's an amazing horse. He's probably the best sprinter in the country, and I think he can win going a mile and a half on the turf - I really do. (Castellano) never moved on him. He just took a hold of him in the stretch.

Ghostzapper draws off in the stretch. Explaining the reason for Ghostzapper's long layoff, trainer Bobby Frankel said, " He was coming back off a sinus problem and he was a little lighter than I wanted him to be. He lost a little weight when he got that sickness. You just worry that he's going to come back as the same horse. Obviously, he looks right now that he's the same horse. He's been putting on weight the last couple of weeks. In a way, I thought it was a blessing to keep the weight off his legs." 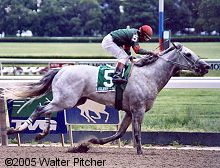 Second place finisher Silver Wagon at the finish of the race. His trainer Ralph Ziadie said, "He ran a super race. To me, this was like a win. We knew it would be tough against Ghostzapper, but I couldn't ask for much more." His jockey Cornelio Velasquez said, "I'm very, very happy. My horse ran very big. Ghostzapper is the big horse." 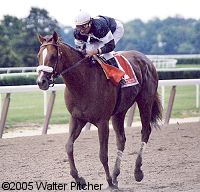 Third place finisher Sir Shackleton returns after the race. His jockey Rafael Bejarano said, "I saw a lot of speed in the race, so I didn't want to use my horse early. When I started riding, my horse was coming strong, but Ghostzapper was too far in front and too good. Maybe next time with a little more distance my horse will do better."