The feature race on closing day at Del Mar was the $300,000 Matriarch Stakes (G1) for older fillies and mares going 1 mile on the Jimmy Durante turf course. Conditions were typical for early December at the seaside oval, with cloudy skies and temperatures in the mid 60's for the 3,263 fans in attendance, the main track rated fast and the turf going firm. After 2 scratches, a field of 8 went to post with last year's winner Regal Glory sent off as the 3-5 favorite off her disappointing 10th place finish in the Breeders' Cup Mile (G1) after finishing second in the First Lady (G1) both at Keeneland. In to challenge her included 3-1 second choice Hamwood Flier, winner of the Swingtime Stakes, and 15-2 third choice Dolce Zel, third in the Lake Placid (G2) after winning the Lake George (G3) both at Saratoga. 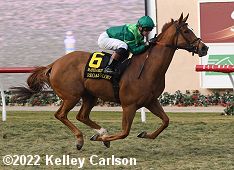 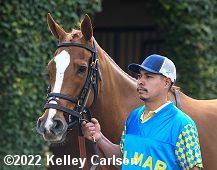 Left: Regal Glory in the winner's circle. Winning jockey Flavien Prat said, "I had great respect for Mike's (Smith) filly (Hamwood Flier), but there was nothing I could do about it then. My mare had to run her race. Once she got going, I knew we were going to be all right. Then she did and we were all right."

Right: Regal Glory inn the paddock before the race. Jose Hernandez, assistant to winning trainer Chad Brown said, "She broke a little slow and (Prat) tried to relax her on the backside, but I don't worry about it. Those kind of fillies just kick off and it was amazing. We're going to miss her. We've had a lot of nice moments, a lot of nice races." 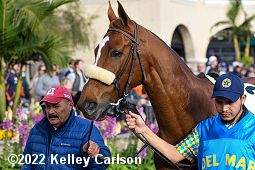 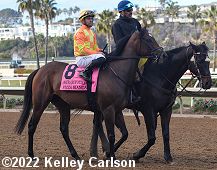 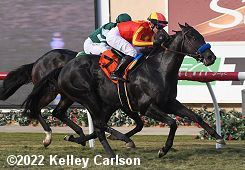 An hour before the Matriarch, a field of 8 two-year-olds contested the $100,000 Cecil B. DeMille Stakes (G3) also at 1 mile on the turf. Speakeasy Stakes winner Speed Boat Beach was sent off as the 8-5 favorite off his ninth place finish in the Breeders' Cup Juvenile Turf Sprint (G1). In to challenge him included 2-1 second choice First Peace off his maiden win at third asking at Santa Anita, and 5-1 third choice Ah Jeez, third in the Speakeasy before finishing seventh in the Zuma Beach (G3).

Jockey Umberto Rispoli sent 9-1 fourth choice Game Time to the lead first time by and he set fractions of 22.82, 47.30, and 1:12.08 while pressed by Speed Boat Beach and stalked by First Peace. Turning for home, jockey Flavien Prat sent Speed Boat Beach to take over the lead through 7f in 1:23.69. Kept to task by Prat, Speed Boat Beach held off Game Time to win by 1/2 a length in 1:35.38. It was another 1 3/4 lengths back to First Peace third.
Full results chart from DRF 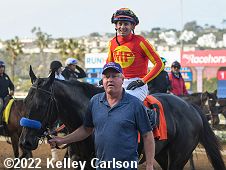 Left: Speed Boat Beach in the winner's circle. Winning jockey Flavien Prat said, "He broke well and I thought I was going to be on the lead. But Umberto (Rispoli on Game Time) wanted to go, so we were fine running second. My horse was relaxed and that's what I wanted. When it came time, he went about his business. Two turns, no problem today. Good race for him."

Right: Speed Boat Beach returns after the race. Winning trainer Bob Baffert said, "I liked the way he relaxed and (yet) he has the speed. For a horse that can go from a five and a half track record and then win going a mile on the turf, that's a pretty good race horse and he's going to get better with age. So we'll just pick our spots with him. Just have fun with him." 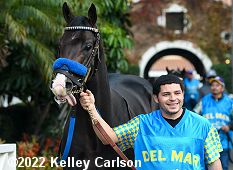 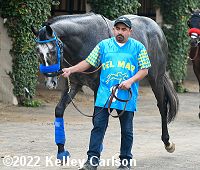 Left: Second place finisher Game Time in the paddock before the race. The John Sadler trainee improved his record to 1 win, 2 seconds, and 0 thirds in 4 starts, earning $73,100 for owner Hronis Racing.