The feature race on closing day at Del Mar was the $300,000 Matriarch Stakes (G1) for older fillies and mares going 1 mile on the Jimmy Durante turf course. Conditions were typical for late November at the seaside oval, with sunny skies and temperatures in the low 70's for the 3,063 fans in attendance, the main track rated fast and the turf going firm. Just 6 made final entry with Yellow Ribbon Handicap (G2) and Ladies Turf (G3) winner Princess Grace sent off as the 3-2 favorite off her third place finish in the Goldikova (G2). In to challenge her included 8-5 second choice Regal Glory, second in the First Lady (G1) at Keeneland, and 7-2 third choice Viadera, last year's winner but 6th in the First Lady after winning the Ballston Spa (G2).

Jockey Jose Ortiz sent Regal Glory to the lead first time by and she set fractions of 24.06, 48.50, and 1:12.56 while stalked by 7-1 fourth choice Zofelle and 21-1 Bodhicitta. Turning for home, Regal Glory pulled away from the field through 7f in 1:24.07 and finished 2 1/2 lengths clear of Zofelle in 1:35.33. It was another length back to late-running favorite Princess Grace third. 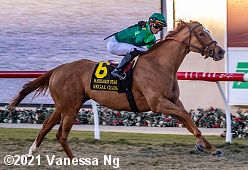 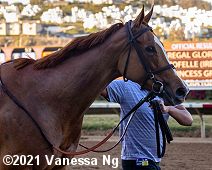 Left: Regal Glory in the post parade. Jose Hernandez, assistant to winning trainer Chad Brown said, "Just go to the lead. That's what my boss told the jockey. That was the plan. She's a really nice filly and she did it all. I had some moments (of concern) because the other one (Viadera) is very good too. But this filly was just the best. They all (Chad Brown's seven horses) go back to Kentucky on Tuesday and then to Florida."

Right: Regal Glory heads back to the barn after the race. 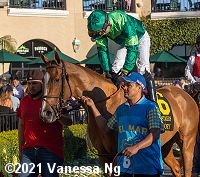 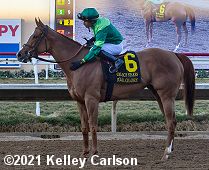 Left: Regal Glory in the paddock. Winning jockey Jose Ortiz said, "I thought I'd have the lead and thought I was the only real speed in the race. The horse inside (Princess Grace) has speed, but when she used it last time she didn't finish. So I thought I'd be out front and it worked out just that way. We got away with some easy fractions and then she had lots for the finish." 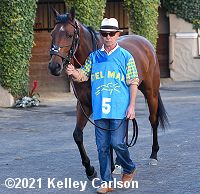 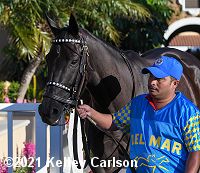 Left: Second place finisher Zofelle in the paddock before the race. The Brendan Walsh trainee improved her record to 5 wins, 5 seconds, and 3 thirds in 20 starts, earning $452,294 for owner Heider Family Stables.

Right: Third place finisher and beaten favorite Princess Grace in the paddock. The Mike Stidham trainee improved her record to 6 wins, 1 second, and 2 thirds in 9 starts, earning $970,860 for owner-breeder Susan and John Moore.

The horses break from the gate for the Matriarch Stakes. 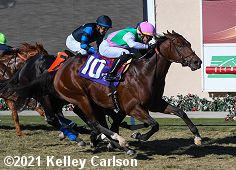 Two hours before the Matriarch, a field of 10 two-year-olds contested the $100,000 Cecil B. DeMille Stakes (G3) also at 1 mile on the turf. Verbal was sent off as the even money favorite off his 4 length debut win at Belmont on October 10. In to challenge him included 9-4 second choice Optimising, second in the Qatar Golden Mile Stakes on the Breeders' Cup Friday undercard, and 17-2 third choice Cabo Spirit, a maiden winner at fifth asking last out.

Jockey Edwin Maldonado sent 89-1 longest shot Groovy Huey to the lead first time by through fractions of 22.04 and 46.10 while pressed by 12-1 Get Back Goldie and stalked by 50-1 Barsabas. On the far turn Groovu Huey tired badly allowing Get Back Goldie to inherit the lead through 3/4 in 1:11.86. In the lane, Cabo Spirit, 4th early under Victor Espinoza, moved up to gain a short lead through 7f in 1:24.24 but Verbal, 6th early under Jose Ortiz, came out 4 wide for room and rallied to win by 1/2 a length in 1:36.16. Barsabas fought back late to nose out Cabo Spirit for second place money.
Full results chart from DRF 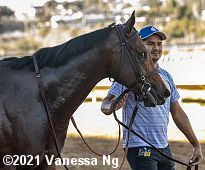 Left: Verbal in the winner's circle. Jose Hernandez, assistant to winning trainer Chad Brown said, "I liked the way he was coming into this race, he's been training well. It worked out like we thought. He's got a really good turn of foot and he got there. We didn't have much luck yesterday, but this is a really good start for today."

Right: Verbal heads back to the barn after the race. 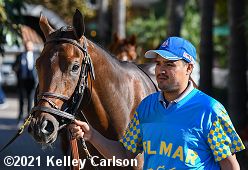 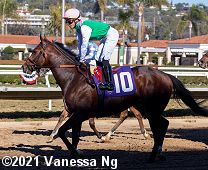 Left: Verbal in the paddock before the race. Winning jockey Jose Ortiz said, "He won easy last time, but that was against maidens. He was running against winners today, much better horses. I knew there would be speed in the race so, even though I had the outside post, I was able to drop over and save some ground. He came running when it counted. The boss (trainer Chad Brown) knows how to spot a horse. He had it right today."

Right: Verbal returns after the race. 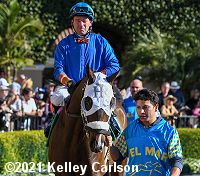 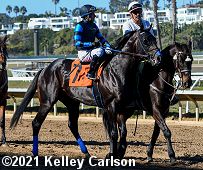 Left: Second place finisher Barsabas in the paddock before the race. He improved his record to 2 wins, 2 seconds, and 2 thirds in 7 starts, earning $76,420 for owner-trainer Ryan Hanson and co-owner Christopher Drakos.