There were three graded stakes races at Belmont Park on Saturday, each potentially having Breeders' Cup implications. Conditions were excellent with clear skies and temperatures in the upper 60's, allowing for a fast main track and firm turf, with 6,924 spectators on hand.

The $250,000 Futurity Stakes (G2) featured a field of 8 two-year-olds sprinting 7 furlongs on the main track. Saratoga Special winner D'Funnybone was sent off as the 2-5 favorite over 7-2 second choice Discreetly Mine, winner of a maiden at Saratoga in his third attempt and making his stakes debut here. 7-1 Successful Score, also a maiden winner last out, completed the top three on the board.

33-1 Hear Ye Hear Ye battled for the lead with 50-1 longest shot Soundman and favorite D'Funnybone through fractions of 22.63 and 45.51. Entering the stretch, Hear Ye Hear Ye faded to eventually finish 6th, allowing D'Funnybone to open up a 3 length advantage at the 1/8 pole through 3/4 in 1:09.71. Discreetly Mine, fourth early after hitting the side of the gate at the start, came through between horses and closed well but was left with too much ground to make up as D'Funnybone easily cruised under the line 4 3/4 lengths in front in 1:22.40. It was a long 8 lengths back to 21-1 Thiskyhasnolimit third. 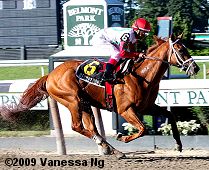 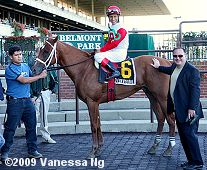 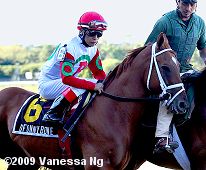 Left: D'Funnybone in the winner's circle with trainer Richard Dutrow Jr. at his hip.

Right: D'Funnybone in the post parade. Dutrow said, "I was very impressed. He had to show up on this track going a little further, he dealt with some tough customers, and he showed up the right way. We're very, very happy with him. Everything went his way today; he broke good, and he likes to stalk the speed on the outside. He is an unassuming horse, but he's OK. It seems like he's quick-footed and he puts himself in position. He's handy and that must be what's helping him in these sprints. Now, we have to try longer and see what he's made of. I'd rather run him (in the Champagne) and then just stop on him for the year. I wish it were 5 weeks. I'm not crazy about California and the Polytracks, but there's a lot of excitement that goes with (the Breeders' Cup) and how can you turn it down?" 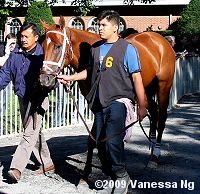 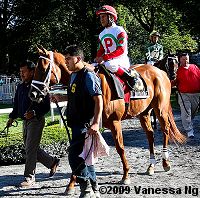 Left: D'Funnybone enters the paddock before the race.

Right: D'Funnybone heads out of the paddock. His jockey Edgar Prado said, "He ran the way we expected. He was training great in the morning and he was very happy. He broke super and I rode with a lot of confidence today. I know what he's capable of, so I let the other two horses go and sat and waited. I was looking for him to see a target and he was very comfortable there. I think there's room to improve there, because once he took the lead he started goofing around a little bit. Today he gave me a better feeling than last time. Last time I thought he was going to be limited, but today he really opened up and I didn't even have to hit him. I think he's getting better with races and rating well. He's moving the right way." 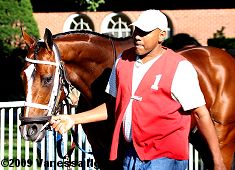 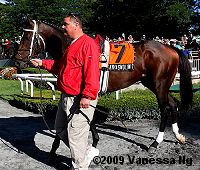 Left: Second place finisher Discreetly Mine in the paddock before the race. His trainer Stanley Hough said, "I loved the way he ran. He didn't have the best of trips, but I'm tickled to death with his performance. I'm leaning towards running him in the Champagne. (D' Funnybone) is a nice horse." His jockey Cornelio Velasquez added, "He broke well, but my position inside (was not the best). (Soundman) went to the lead and I had to take him back (at the 1/2 mile pole). He's a nice horse."

Right: Third place finisher Thiskyhasnolimit in the paddock before the race. The 21-1 shot raced in fifth early under jockey Shaun Bridgmohan, gained third passing tiring horses, but could not improve position, finishing third beaten 12 3/4 lengths. The Steve Asmussen-trained son of Sky Mesa out of Deputy Minister mare Lovely Regina improved his record to 1 win, 1 second, and 1 third in 4 starts, earning $65,085 for owners Robert and Cathy Zollars and Mark Wagner.


The distaff counterpart to the Futurity is the $250,000 Matron Stakes (G2) for 2-year-old fillies also going 7 furlongs on the main track. Worstcasescenario, undefeated in 2 lifetime starts including the Adirondack last out, was sent off as the 9-10 choice in the field of 9 over 4-1 Awesome Maria, winner of a maiden event by 8 1/4 lengths in her last start, and 5-1 Dashing Debby, fifth in the Adirondack after winning the J J's Dream Stakes in her debut.

47-1 longest shot Southern Truth was sent to the front soon after the start by jockey Jose Lezcano, and she set early fractions of 22.57 and 45.20 while Awesome Maria, who was bumped at the start, stalked her a length behind and to her outside. Southern Truth continued to lead into the stretch but faded at the 3/16 pole allowing Awesome Maria to take over the lead through 3/4 in 1:10.12. 16-1 Touching Beauty, who was 5th early, came out for running room late and closed well to get third but was no match for Awesome Maria who prevailed by 2 3/4 lengths in 1:23.07. It was just a nose back to 37-1 Worship the Moon third, while Worstcasescenario raced in mid pack early but tired badly and was eased late by jockey Alan Garcia. 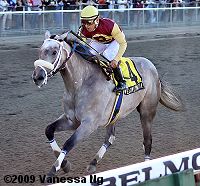 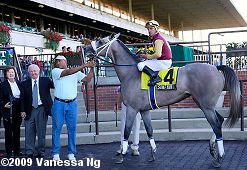 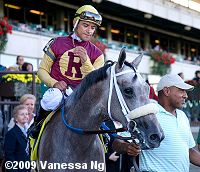 Awesome Maria in the winner's circle. Her trainer Stanley Hough said, "I think she'll be better going longer. I thought there'd be more speed in the race than actually came out. She's kind of got one pace to her, but fortunately, it's a pretty good pace. She trained great; I really love the filly. She's got a great mind. I've been a little partial to her. She's a beautiful filly. If everything is right, I'm leaning toward the Frizette." 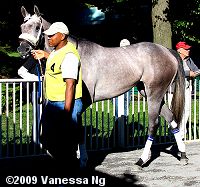 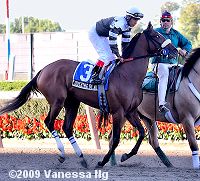 Right: Awesome Maria in the paddock. Her jockey Cornelio Velasquez said, "She broke very well and stayed in good position close to the pace. At the 3/4 pole when I asked her, I had a lot of horse. I like the filly. She doesn't stop, she'll run all day."

Left: Second place finisher Touching Beauty in the post parade. The 16-1 shot broke awkwardly then raced in third early under jockey Edgar Prado, dropped back at the 1/2 mile pole, then came on late to get second beaten 2 3/4 lengths. The James Jerkens-trained daughter of Tapit out of Ikari mare Victory Road improved her record to 1 win and 1 second in 2 starts, earning $80,000 for owner-breeder Gainesway Thoroughbreds. 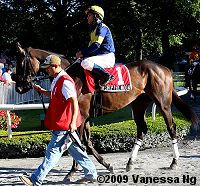 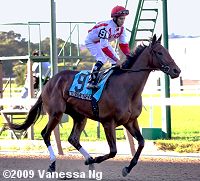 Left: Third place finisher Worship the Moon in the paddock. The 37-1 shot was shuffled back to 8th early and saved ground on the turn under new jockey Javier Castellano, then came out 4 wide into the stretch and rallied late to get third, just a nose back of second. The Mark Shuman-trained daughter of Malibu Moon out of Saint Ballado mare Evangelizer improved her record to 1 win, 0 seconds, and 1 third in 3 starts, earning $55,300 for owner Golden Dome Stable.

Right: Eighth place finisher and beaten favorite Worstcasescenario in the post parade. Her jockey Alan Garcia said, "My filly just didn't feel the same as last time and she got tired."


Kicking off the stakes action on Saturday was the $100,000 Noble Damsel Handicap (G3) for older fillies and mares going 1 mile on the Widener turf course. Rutherienne was sent off as the 2-5 favorite in the field of 7, exiting a close second in the Ballston Spa Handicap at Saratoga last out. In to challenge her included 6-1 second choice Meadow Saffron, fifth in the Matchmaker at Monmouth after winning the Casino Stakes at Indiana Downs, and 7-1 third choice Grande Annee, fourth in the De La Rose at Saratoga after shipping in from England.

Meadow Saffron and 30-1 Stealin' Kisses dueled for the lead down the backstretch through fractions of 22.75, 47.17, and 1:12.00 over the firm course, while as many as 8 lengths in front of the rest of the field. Entering the stretch, both tired from the hot pace, as 9-1 Quiet Meadow and favorite Rutherienne moved up to the lead. The pair battled through the final furlong and hit the wire together, with the photo finish determining that Rutherienne got her nose down first in 1:34.34. It was a long 3 1/4 lengths from Quiet Meadow back to 14-1 Social Queen third. 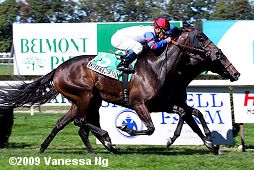 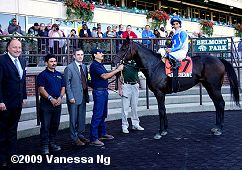 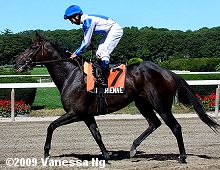 Left: Rutherienne in the winner's circle with trainer Christophe Clement on the left. Clement said, "The bottom line, it was a very tight race, a very good race. They both opened up on the rest of the field, but I'm delighted with my filly. It's been a long time since she's won a race and, as I said, she ran a very good race. They were flying that last quarter. She's been so consistent. Look at her career - she's never run a bad race. I know she only won by a nose today, but she's a very good filly. (Quiet Meadow) ran a very good race too. We'll enjoy this, I'll call my owner, and go from there."

Right: Rutherienne returns after the race. Her jockey Alan Garcia said, "Right past the finish line, I said, 'Javier, congratulations.' It was so tight, I thought he had won. It was a good race. She got a little timid between horses, but then she really dug in. She's a very nice horse." 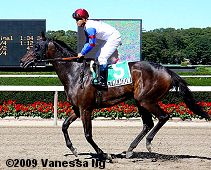 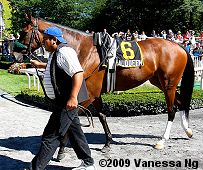 Left: Second place finisher Quiet Meadow returns after the race. The 9-1 shot rated in fourth early under new jockey Javier Castellano, came out three wide for the drive, battled with the favorite late and lost in a tight photo. The Chad Brown-trained daughter of El Prado improved her record to 3 wins, 4 seconds, and 3 thirds in 15 starts, earning $202,408 for owners Hidden Brook Farm and Dan Zucker.

Right: Third place finisher Social Queen in the paddock before the race. The 14-1 shot trained the field for 3/4 mile under new jockey Kent Desormeaux, came out five wide into the stretch and closed well down the center of the course to get third beaten 3 1/4 lengths. The Alan Goldberg-trained daughter of Dynaformer improved her record to 6 wins, 1 second, and 5 thirds in 20 starts, earning $343,047 for owner Richard Santulli.