The feature race on Saturday at Del Mar was the $150,000 John C. Mabee Stakes (G2) for older fillies and mares going 1 1/8 miles over the Jimmy Durante turf course. Conditions were typical for early September at the seaside track, with sunny skies and temperatures in the mid 80's. Raymundos Secret was sent off as the 7-5 favorite off an allowance win after finishing 5th in the Autumn Miss (G3) last October. In to challenge her included 8-5 second choice Lady Prancealot, 4th in the Yellow Ribbon Handicap (G2), and 7-1 Quick, second in the CTT and TOC Stakes.

Jockey Flavien Prat sent Raymundos Secret to the lead out of the infield chute and first time by through fractions of 24.87, 48.60, and 1:12.52 while pressed by Quick and stalked by 16-1 Zee Drop. Turning for homne, Raymundos Secret opened up a 2 length lead through 1 mile in 1:36.16. Lady Prancealot, 6th early under Umberto Rispoli, put in a strong 3 wide rally but Raymundos Secret held her off to win by a neck in 1:48.60. It was another length back to 23-1 Catch the Eye third. 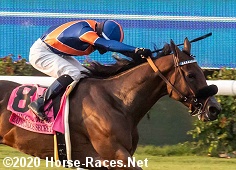 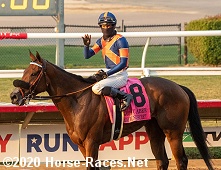 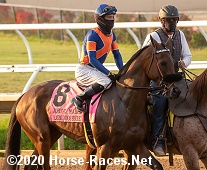 Left: Raymundos Secret in the "winner's circle". Winning jockey Flavien Prat said, "The plan wasn't necessarily to go to the front; just to break her out of there and see what happens. She broke super sharp and we were on the lead. From there I just tried to get her to relax and to slow it down as best as I could. Then when we went for home, she gave me a good kick. She just had enough at the end."

Right: Raymundos Secret in the post parade. This is Prat's 13th stakes win this season, tying him with Rafael Bejarano (2012) for the record for most stakes win for a jockey in one season at Del Mar. Prat added, "It's a good accomplishment. I'm glad for it. I'm hoping I've got one or two more before we're done here, too." 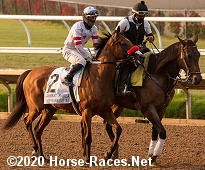 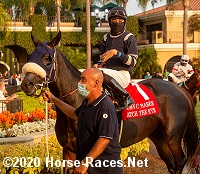 Right: Third place finisher Catch the Eye in the paddock before the race. The David Hofmans trainee improved her record to 2 wins, 2 seconds, and 1 third in 14 starts, earning $121,102 for owner-breeder Amerman Racing.